The #10 Wayne Taylor Racing Cadillac recovered from an earlier penalty to win the 2020 edition of the Daytona 24 Hours.

The #10 WTR car was hit with a 60-second stop-and-go penalty with around five hours of the race still to run for a pitlane infringement, dropping off the lead lap to fourth as a result.

However, the entry was able to bounce back from this, Kamui Kobayashi steering the Konica Minolta #10 across the line 65s ahead of the polesitting #77 Mazda RT24-P driven by Oliver Jarvis, Tristan Nunez and Olivier Pla.

The 58th running of the event also featured a record distance completed due to only six caution periods, the top three completing 833 laps.

Over the final couple of hours, Kobayashi was taking it relatively easy and still pulling away from the Mazda, which in turn crossed the line 20s ahead of the #5 JDC Miller MotorSports Cadillac of Sebastien Bourdais, Joao Barbosa and Loic Duval.

Fourth was earned by Dane Cameron, Juan Pablo Montoya and Simon Pagenaud in the #6 Acura Team Penske ARX-05, four laps down after being slowed almost throughout the race by the car bottoming out.

The second JDC Miller entry of Matheus Leist, Tristan Vautier, Chris Miller and Juan Piedrahita was fifth, ahead of the second Mazda which was way off the pace for the last three hours due to a power loss. 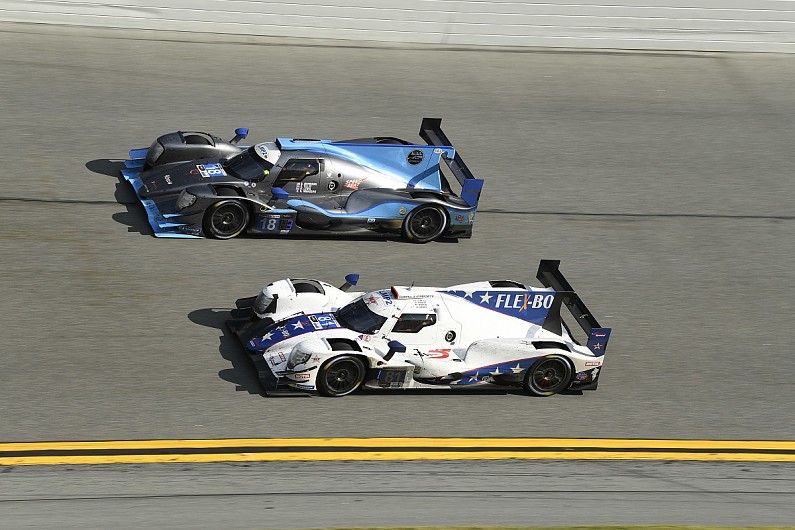 The Finn had to pass both Porsche 911 RSRs over the course of the final couple of hours, but eventually left them in his wake, crossing the line 14s ahead.

Earl Bamber in the #912 car he shares with Laurens Vanthoor and Mathieu Jaminet engaged in a frantic duel with Nick Tandy in the final hour, but held on and then pulled away to restrict the Tandy, Fred Makowiecki and Matt Campbell-driven machine to the lowest step on the podium.

Antonio Garcia, Jordan Taylor and Nicky Catsburg delivered a fourth place finish for the new mid-engined Corvette C8.R on its debut, albeit well over a minute behind the Porsche battle.

The Risi Competizione Ferrari 488 retired more than hour before the end with a lack of power, leaving fifth place to last year's winning BMW M8, which was 13 laps down due to earlier trouble when it ran over debris.

The WRT Speedstar Audi Sport R8 of Mirko Bortolotti, Rolf Ineichen, Daniel Morad and Dries Vanthoor clinched the last step on the podium, ahead of the Porsche 911 GT3 Rs of Wright Motorsports and Black Swan Racing, and the Turner Motorsport BMW M6.