After Marciello damaged the front left of his car hitting the inside kerb at Turn 15, Mies got the #1 car into the lead just before the pit window opened.

Riberas came out of the pits with a large advantage after the leaders made their stops, extending his lead to the sister #2 WRT Audi of Will Stevens and Dries Vanthoor to just over 10 seconds by the checkered flag.

The WRT Audi's decisive edge came after Perera suffered a front-right puncture just before he entered the pits as he attempted a pass on the already damaged Mercedes of Marciello.

Meanwhile, Vanthoor started the race down in sixth place, but was able to make the most of troubles ahead of him to rise up into second by the time Stevens got behind the wheel. 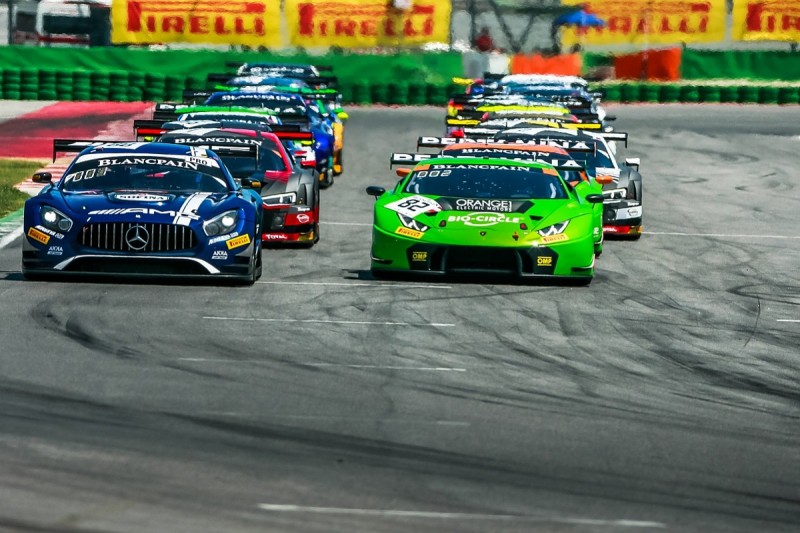 All three Grasser Lamborghini cars, not just Perera, suffered tyre punctures during the first 25 minutes. While the #63 of Mirko Bortolotti sustained one on their own, dropping them down outside of the top 15.

The #25 Sainteloc Audi of Simon Gachet and Christopher Haase therefore made their way from seventh at the start to finish third, making it an all Audi podium.

The manufacturer also had a fourth place finish through Kelvin Van der Linde's #66 Attempto Racing, although Van der Linde had a late challenge from the #87 AKKA ASP Mercedes with Nicolas Jamin behind the wheel.

After retiring from the lead of the first race, Jamin entered the car after his team-mate Denis Bulatov had risen up the grid from 12th, and was able to get past the #17 WRT Audi of Stuart Leonard to take the Silver Class victory.

The #88 had fallen down to ninth place after Marciello handed the car over to his team-mate Michael Meadows, losing the place to Nyls Stievenart's #26 Sainteloc Audi in the latter quarter of the race.