Will Power secured his first victory of the IndyCar season for Team Penske, as the race at Pocono was abandoned for weather and featured a huge crash at the start

Power moved up to third before the race was red flagged on the opening lap after an incident that involved five of the cars in the top 10 including the driver second in the championship, Alexander Rossi.

When the race was getting ready to restart, Power had to pit because of an air pressure problem, putting him at the back of the grid.

Luckily for the Penske driver the yellow flag came out while he was still in the pits, leading to him coming back on track in second behind team-mate Simon Pagenaud.

Power fell back to seventh place when he pitted under the third caution, but on fresher tyres was able to stay out for longer than the drivers in front of him.

With a thunderstorm heading to the track, Power made his final stop on lap 112 and kept the lead of the race ahead of Scott Dixon.

The race was put under caution for the final time and soon after red flagged for nearby lightning on lap 126, with the result being declared soon after because of the incoming storm.

The result is Power's first IndyCar win in nearly a year, since his 2018 victory at Gateway, and makes this his 13th consecutive IndyCar season with at least one win.

Chip Ganassi's Dixon ended in second for his fourth podium in a row.

He was running inside the top five for the opening half of the race, but moved into the lead after pitting a lap earlier than race leader Pagenaud - who eventually finished third - on lap 71.

Santino Ferrucci started 13th but quickly moved into fifth after the opening lap crash where he braved a high line to avoid the wreck happening lower down the racetrack.

The rookie driver was running as high as second place in the race and took a best finish of fourth when the race was declared.

Polesitter and championship leader Josef Newgarden ended the race in fifth after losing the lead to Pagenaud at the start then a few more places during the first round of pitstops.

Newgarden still extended his points lead as Rossi was involved in the lap one crash. 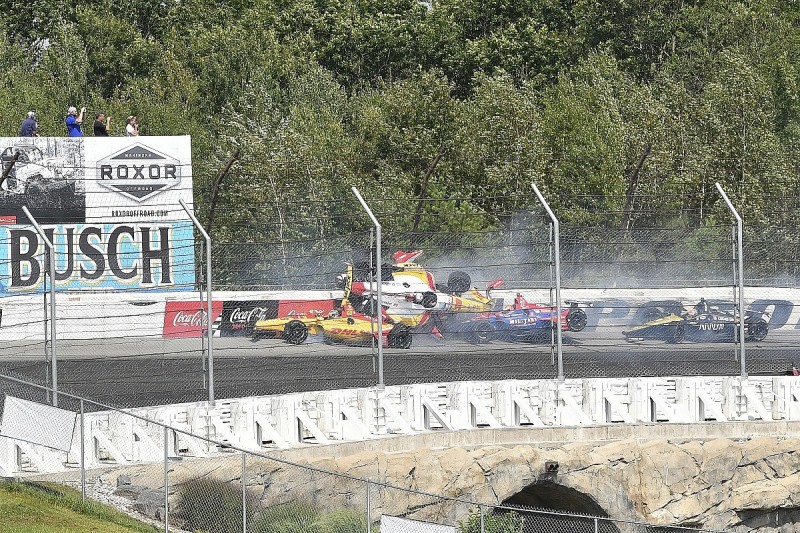 Takumo Sato collided with Rossi when they were running three-wide with Ryan Hunter-Reay entering Turn 2.

Sato and Reay collected Felix Rosenqvist who went airborne and landed on the tyre wall, while Sato's car flipped after contact again with Rossi.

James Hinchcliffe was also caught up in the incident, hitting the outside wall when trying to slow down.

Hunter-Reay, Rossi and Sato were released from the circuit medical centre almost immediately after the crash, while Rosenqvist was released just before the end of the race after heading to a nearby hospital for checks.