Wehrlein stepped up from a testing and junior role with Mercedes to the F1 grid this year with Manor, after winning the 2015 DTM championship.

He qualified a season-best 12th that weekend at the Red Bull Ring, and also made the second phase of qualifying at Spa, Monza, Mexico City and in Abu Dhabi's season finale.

"First of all thank you much for this - it's my first time here and I'm really impressed," said Wehrlein.

"It's been a fantastic season with many highlights - particularly making Q2 and points in Austria." 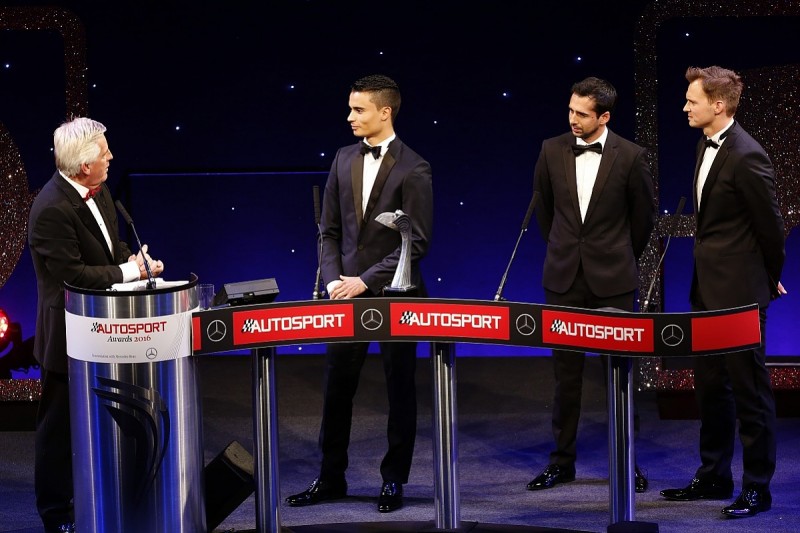 As part of Mercedes' junior programme, Wehrlein has been cast into the spotlight as a potential candidate for Nico Rosberg's now-vacant seat following the world champion's shock retirement on Friday.

"One season in F1 is not a lot but I feel ready for the job and confident," said Wehrlein.

"I'm sure Toto [Wolff]'s phone is overheating after Friday.

"I've done most days with the 2017 tyres and I think it's very important to have that experience."

Esteban Ocon - Wehrlein's team-mate for the second half of 2016 with Manor - and Renault's Jolyon Palmer were among the other nominees, along with Indianapolis 500 winner Alexander Rossi, GP2 runner-up Antonio Giovinazzi and GP3 champion Charles Leclerc.