Richard Verschoor led the second FIA Formula 2 race at Silverstone from lights-to-flag, converting a pole position into his first win in the series.

The MP Motorsport rookie, who finished ninth in F3 last season, took his first podium after starting at the front of the grid thanks to the reverse grid format from this morning’s race.

Marcus Armstrong finished in second for DAMS, taking his first podium of the season, while Carlin’s Dan Ticktum took third at his home race.

Oscar Piastri finished fourth for Prema Racing, with Hitech Grand Prix’s Liam Lawson in fifth and his team-mate Juri Vips, who finished second in this morning’s race, in sixth.

Guanyu Zhou, who led the drivers’ standings into the weekend, started from the back of the grid after spinning out in the first sprint race, but a number of collisions and safety cars allowed him to make up places, finishing 12th.

Christian Lundgaard stalled on the grid and was pushed back to the pitlane by marshals, where he started the race from.

The top three of Verschoor, Armstrong and Ticktum held their positions off the start line, before Piastri tried his chances against Lawson into Brooklands, with the pair almost making contact, with Lawson retaining fourth.

Ralph Boschung (Campos Racing) and the HWA Racelab of Alessio Deledda had a big collision in the first sector, causing serious damage to both cars, while Zhou had a narrow escape by managing to swerve the incident.

It prompted a full safety car, which lasted until the end of lap four, with Piastri moving up to fourth after the restart, passing Vips. 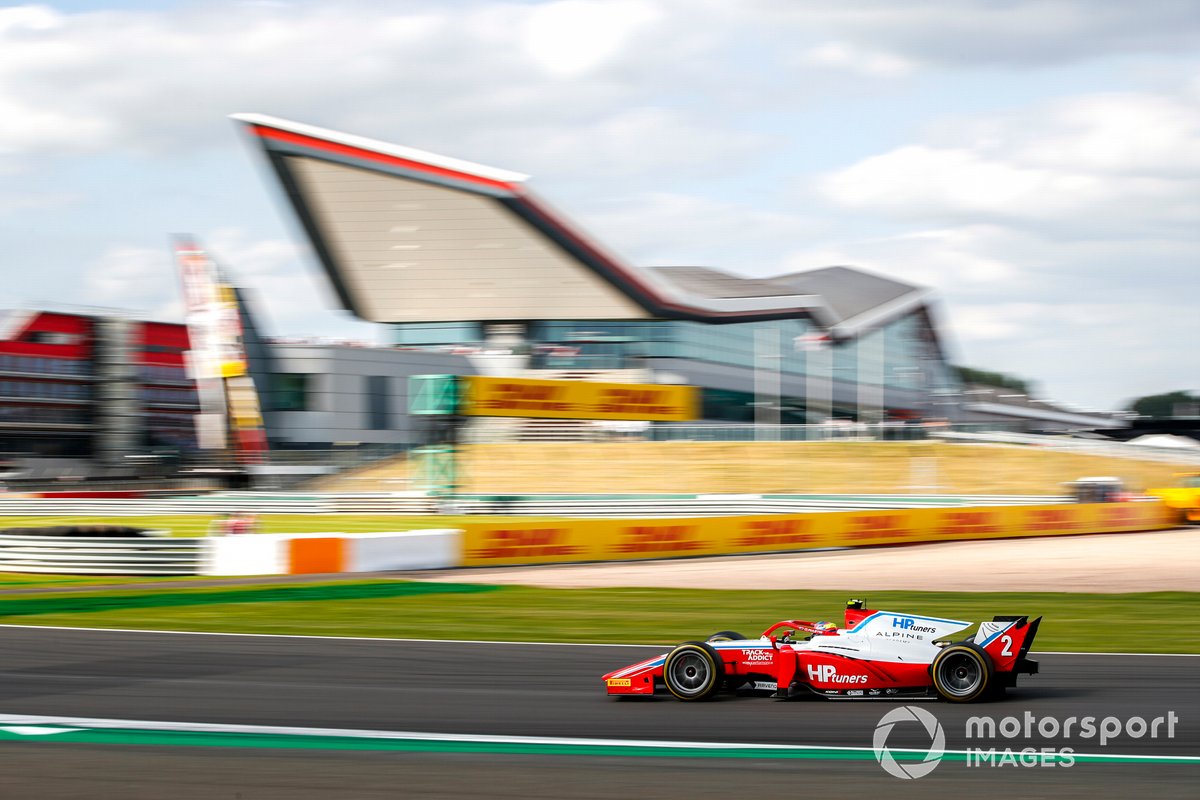 Bent Viscaal (Trident) and the Carlin of Jehan Daruvala collided on lap seven, taking the former out of the race and forcing the latter into the pits for a new front wing.

The incident prompted a second safety car, allowing Daruvala to catch back up to the rear of the field before he was handed a 10-second penalty for causing a collision.

Leading away into lap 11, Verschoor kept a convincing grasp at the front, with Piastri suffering a small lock-up in his pursuit of Lawson.

Jack Aitken fell down the field in lap 16 in his HWA Racelab after spinning while suffering from a lack of rear grip, putting him down to 18th.

Piastri finally passed Lawson down the inside on the entrance of Brooklands on lap 18, moving into fourth place.

Vips and Drugovich tussled for sixth on lap 19, with Vips narrowly managing to hold his position.

Robert Shwartzman, who won this morning’s race for Prema Racing, was sent spinning after catching the kerb, sending him down from ninth into 14th on the penultimate lap.

Piastri will start on pole for tomorrow’s feature race, with Zhou in second and Verschoor in third.

Ticktum will start fourth, hoping to take victory at his home race.