Guanyu Zhou took victory in the FIA Formula 2 feature race at Silverstone, passing polesitter Oscar Piastri off the line before taking the win.

Zhou, who started second and led the drivers standings for UNI-Virtuosi heading into the weekend, crossed the finish line almost four seconds ahead of Carlin’s Dan Ticktum, who finished second at his home race.

Piastri finished third for Prema Racing, with Richard Verschoor of MP Motorsport in fourth and Prema Racing’s Robert Shwartzman, who won the first sprint race of the weekend, in fifth.

Zhou got the better launch off the line, taking first from Piastri, while Ticktum passed Verschoor into third.

By lap six of 29, Zhou had built up a 1.5 second lead, comfortably leading the pack after 10 minutes.

Ticktum was first to pit on lap six, taking an early tyre change to the softer compound ahead of Robert Shwartzman, Liam Lawson, Marcus Armstrong and David Beckmann.

Christian Lundgaard also pitted but lost his left-rear wheel as he pulled away before having to return to the garage, an incident for which he received a ten-second stop-and-go penalty.

Piastri and Ticktum tussled at Brooklands for 13th on lap eight, having both pitted, with the Carlin driver emerging ahead.

Verschoor was the first of the top eight to pit, taking a slow stop before emerging in 10th. 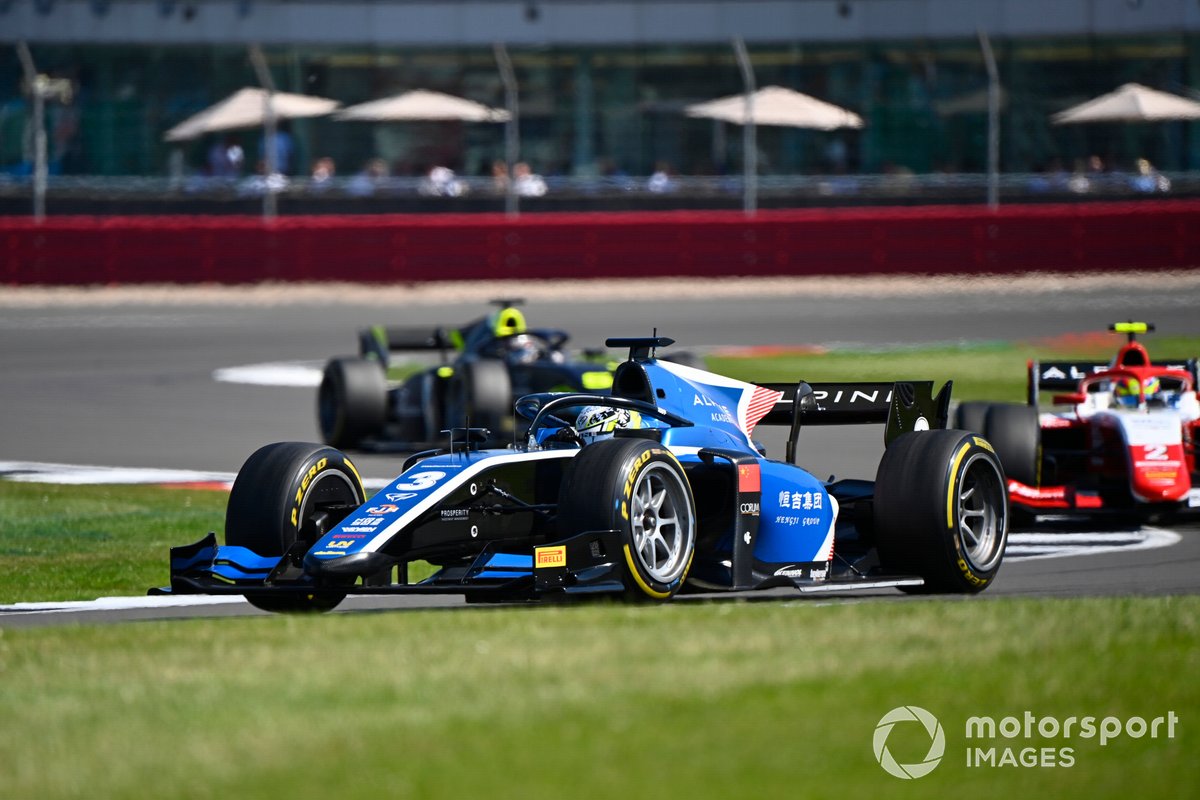 By lap 13, Ticktum and Piastri were battling it out in P7 and P8 as they both looked to clear the cars out in front who were all yet to pit.

Ticktum cleared Nannini on lap 15, but Piastri fell back slightly from the Brit and became stuck behind the Campos driver.

Vips, who had been leading the race, fell to 11th after pitting on lap 19.

Jehan Daruvala maintained his lead into the last six laps, having not pitted, with Zhou close behind him, before the former eventually stopped on lap 24 and was classified 10th.

Roy Nissany ran wide and spun on lap 26, dropping down the standings to P16, having been battling for fifth.

Piastri faced pressure from Verschoor for third for the last two laps, with the pair tussling into the final tour, but the Prema driver held his position to take the third step on the podium.