Jake Dennis says he expected to lose a position at the start of Formula E's opening Diriyah race to Nyck de Vries, feeling third was the maximum achievable result.

Having made it all the way to the final in the new knock-out qualifying format, the Andretti driver lost out in the last duel against Mercedes ace Stoffel Vandoorne - but nonetheless took second on the grid.

But a touch of wheelspin for Dennis meant that reigning champion de Vries's Mercedes got the upper hand off the line, and the eventual race winner shuffled into the first corner ahead of the Briton.

De Vries later passed Vandoorne to take the win when the Belgian failed to properly activate his second attack mode, for which he took full responsibility afterwards.

Dennis said that "what I imagined happened, happened" at the race start as the two Mercedes cars led him into the first turn, and acknowledged that he wasn't going to catch the Silver Arrows after later re-passing Porsche's Andre Lotterer for third.

"Everything what I imagined what happened, happened," Dennis explained.

"Stoffel would come over to the right of me, I'd have to brake early, Nyck comes down outside - and that's exactly what happened!

"It didn't really surprise me, but we settled in the top four with them and Lotterer. We had extremely good pace, obviously pulled away from the pack.

"The only issue is obviously when it's a four-man breakaway, person four has the luxury of taking a free attack mode and I was sort of just dictated by what [Lotterer] would do and obviously he undercut us.

"It was a sort of mistake I think probably just trying to stay ahead and end up coming out behind him." 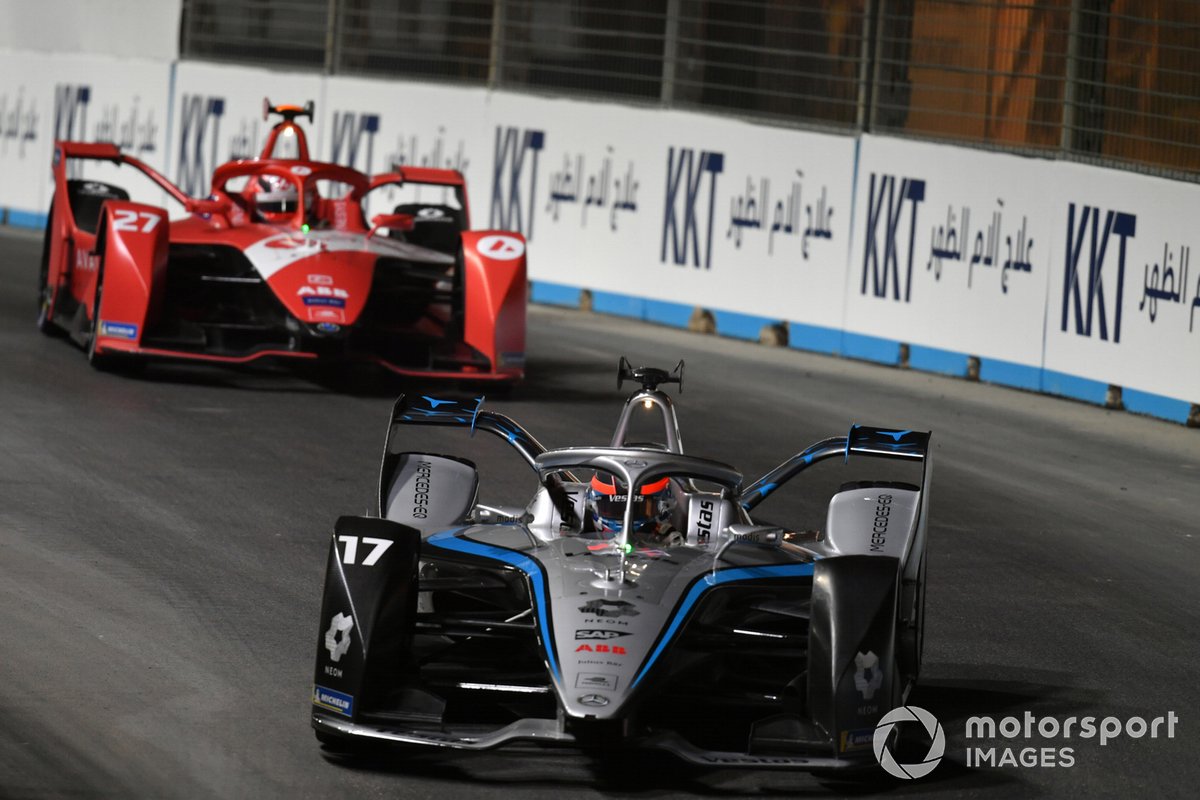 Lotterer's defence of third place was robust, the Porsche driver using every inch of road to keep the position, with Dennis running off-road at one point after a late dive.

Although he later passed the three-time Le Mans winner at Turn 18, Dennis felt that Lotterer - who eventually finished 13th - had swerved under braking to keep him behind.

"I ended up overconsuming quite a lot trying to pass him," said Dennis.

"Lotterer is not the easiest to overtake by any means and yeah, there was contact, swerving under braking, everything.

"We got the job done but at this point, [the Mercedes duo] were six seconds down the road.

"If you go around the outside of Lotterer, it's just never going to work. So there was only one option.

"The first time I tried it, I went to Diriyah - I was so far from the track! And then the next time around, obviously, I got it right [with] a bit of contact.

"He was pushing me into the wall, it was getting quite close. But I got it done."

Dennis also had a late scare with a suspected puncture, explaining he had a "huge vibration", but later reckoned it was either caused by tyre pick-up or bodywork rubbing against the tyre.