Having missed almost all of the opening practice session of the weekend due to a crash, de Vries pulled a full recovery over the remaining sessions, culminating in him pouncing on an attack mode error from Vandoorne to capture victory in the season-opener.

The rapidly starting Mercedes duo swept into the front two positions off the line, with de Vries overhauling a slightly sluggish Jake Dennis.

Vandoorne kept de Vries behind him however, and looked every bit worth his lead in the early stages before an early safety car that was brought out to extricate Oliver Rowland’s crashed Mahindra, dumped into the wall amid a close-quarters battle with Robin Frijns.

Rowland had originally given Frijns more than a fleeting tap into the wall in Turn 14, and the Envision driver repaid the favour two corners later with a nudge from behind. Frijns’ robust attack earned him a drive-through penalty, ending his hopes of leaving the season opener with points on the board.

Vandoorne wasted no time following the restart where he elected not to back up the pack, instead deciding to charge off to continue his tenure in the lead. But in the process of trying to build a break, the Belgian missed his marks on his second attack mode activation and ceded the lead to de Vries.

The reigning champion held strongly and, although Vandoorne attempted to atone for his earlier error and eat into de Vries’ lead, the Dutchman had the measure of him to capture an expertly managed win. Mercedes’ domination ensured that the lead pair finished over eight seconds ahead of third-placed Dennis, who completed the podium.

After dropping a position at the start to de Vries, Dennis lost another spot to Andre Lotterer during the second round of attack mode, as the Porsche driver undercut him to hold third place.

But Lotterer began to overconsume his energy and this left him susceptible to multiple assaults from Dennis – who was left frustrated by the German’s riposte on the first time around at Turn 18 and ran wide, losing time. 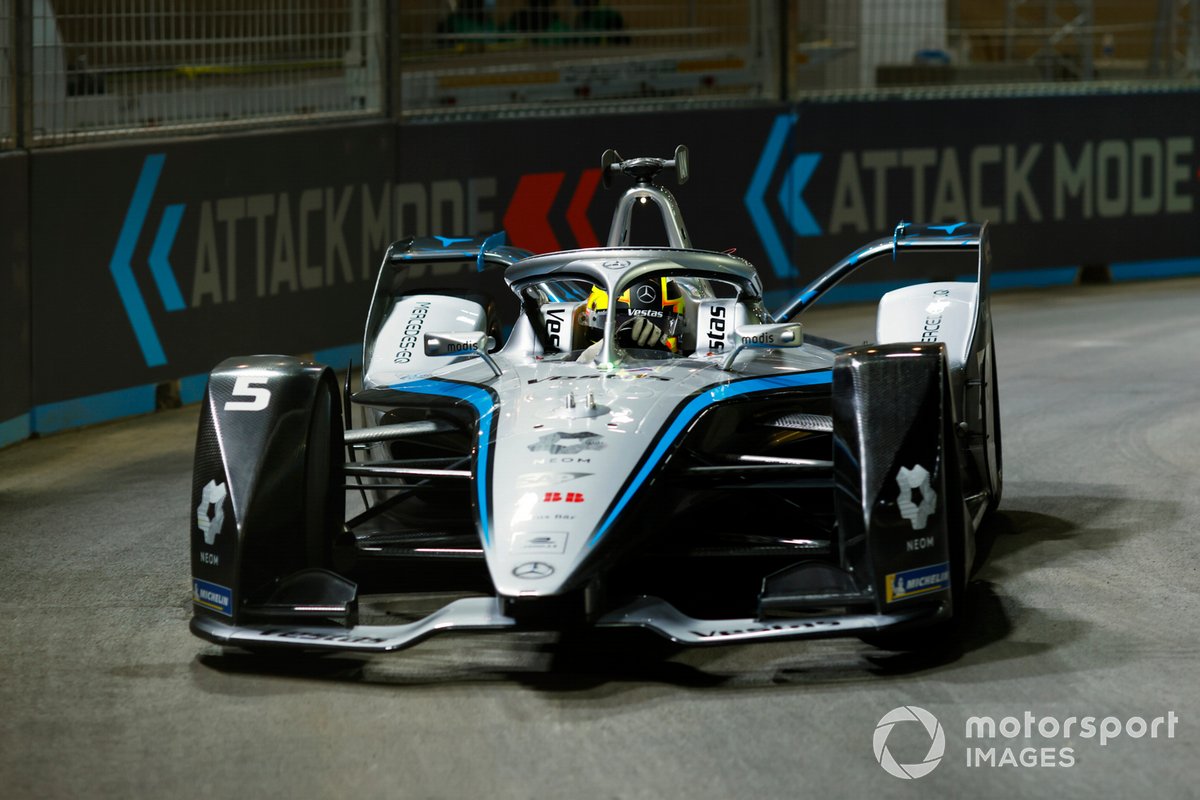 Dennis eventually made a clean pass on lap 27, leaving Lotterer as prey for the chasing trio of Sam Bird, Lucas di Grassi and Nick Cassidy.

Edoardo Mortara made it two Venturis in the top six with a late clearance of Cassidy, who also began to struggle with power consumption towards the end – as 5m15s was added on in extra time following the safety car.

Behind, DS Techeetah's Jean-Eric Vergne prevailed in a lengthy scrap with Jaguar driver Mitch Evans to claim eighth place, ahead of Andretti rookie Oliver Askew – who also passed Evans at the death to double his points haul from the race.

Antonio Felix da Costa joined Rowland on the retirement list, calling it a day after lap 1 with suspension damage.