Bird controlled the race from pole position, leading every lap to score victory over Envision Virgin Racing rookie Nick Cassidy by 4.1s in the Sunday race in the Red Hook Region.

Evans eventually dropped to 13th after a wall tap buckled his rear-left suspension two laps from home, but for much of the race he had held his second place on the grid behind Bird.

Evans followed Bird for the first attack mode to play rear gunner against Cassidy, before fighting back past the Kiwi through the second power boost to allow Bird to build his gap with a one-car buffer.

Bird, who donned an England football shirt as part of the team celebrations, paid tribute to the help from his team-mate on the day that England play Italy in the Euro 2020 finals.

He compared the work of Evans to that of Aston Villa playmaker and England attacking midfielder Jack Grealish as though Bird was akin to tapping in a goal like striker Harry Kane.

He said: “I suppose he was my Jack Grealish and he backed me up well.

“I was, I suppose, the Harry Kane, just putting it in the back of the net.” 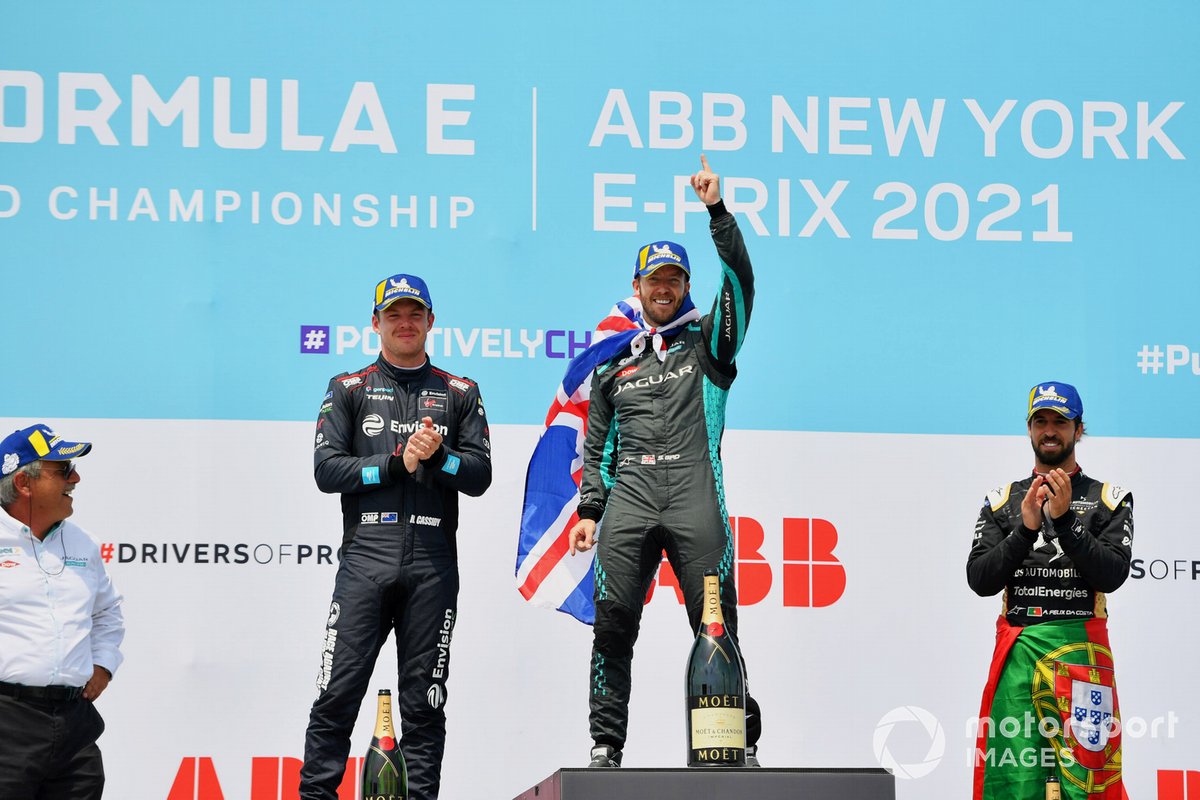 Bird also paid credit to the chassis rebuild his Jaguar team had completed with only minutes remaining ahead of parc ferme rules coming into place for Saturday qualifying after the Brit tagged the wall at Turn 13 which then sent him into the outside Tecpro barrier at Turn 14.

Bird said: “I made a right mess of a car yesterday.

“It was not salvageable, and we had to pull out the spare tub.

“We executed literally the perfect day [on Sunday]. I only missed out on fastest lap today [to Evans].

"But to top group qualifying, to put it on pole, to win the race, to lead every lap is a perfect day.”

Bird departed the previous double-header in Puebla, Mexico only 11th in the standings but now leads over defending champion Antonio Felix da Costa and Robin Frijns by five points.

Asked about the climb up the order, Bird said: “It's not a revival, as such.

“We've seen throughout the year, if you look at the race pace that we've actually had, if someone wants to study it, it's been very strong.

“I just haven't qualified very well for a number of reasons.

“If I'd qualified better this year, I would have done a lot better, but I haven't so it goes to show if you can qualify at the front you can race at the front because we have a very strong car.”