Sam Bird has leapt to the top of the Formula E standings after controlling the New York City E-Prix while his Jaguar Racing team-mate Mitch Evans suffered a late fall.

The Brit was in total command for duration of the 37-lap race to score his 11th victory in the series and leapfrog Robin Frijns plus Edoardo Mortara to the lead of the championship.

It cemented a remarkable overnight turn of fortunes for Bird, who crashed out of free practice on Saturday and picked up just three points in race one after tangling with Oliver Rowland in qualifying.

But on Sunday, he led from lights to flag to score the victory by 4.1s over Nick Cassidy.

Bird enjoyed a fine launch that was flattered by a sluggish getaway for second-starting team-mate Evans who then had to defend from his fellow Kiwi into Turn 1.

Cassidy tried to put his Envision Virgin Racing machine down the inside but Evans jumped late on the brakes, briefly locking the fronts, to wrest back position and fall in formation.

But the race was quickly neutralised by a safety car caused by Jean-Eric Vergne failing to start.

The double Formula E champion qualified last after his throttle died at Turn 1 of his flying lap and then the DS Techeetah car would not fire off the line.

After the one-lap interlude to retrieve the stricken car, Bird held firm and controlled a late restart to breakaway by 0.7s
Initially, this allowed the two Jaguar machines to dictate the pace of the race with a pre-grid plan to avoid the two fighting on track in a bid to recover the team’s position in the standings.

Bird and then Evans dived simultaneously for the attack mode activation zone at Turn 10.

Cassidy was able to vault into second briefly as Evans returned to the racing line, but without the 35kw power hike of his rival, Cassidy we re-passed on the run into Turn 1 of the following lap.

For the next attack mode activation, Jaguar split its strategy. Bird moved for the boost while Evans stayed on the racing line to provide a buffer to Cassidy, who allow gained attack mode.

The rookie was able to leapfrog his countryman Evans despite the Jaguar racer’s best and prolonged defensive efforts but then Evans moved aside at Turn 6 to avoid consuming energy in the battle. 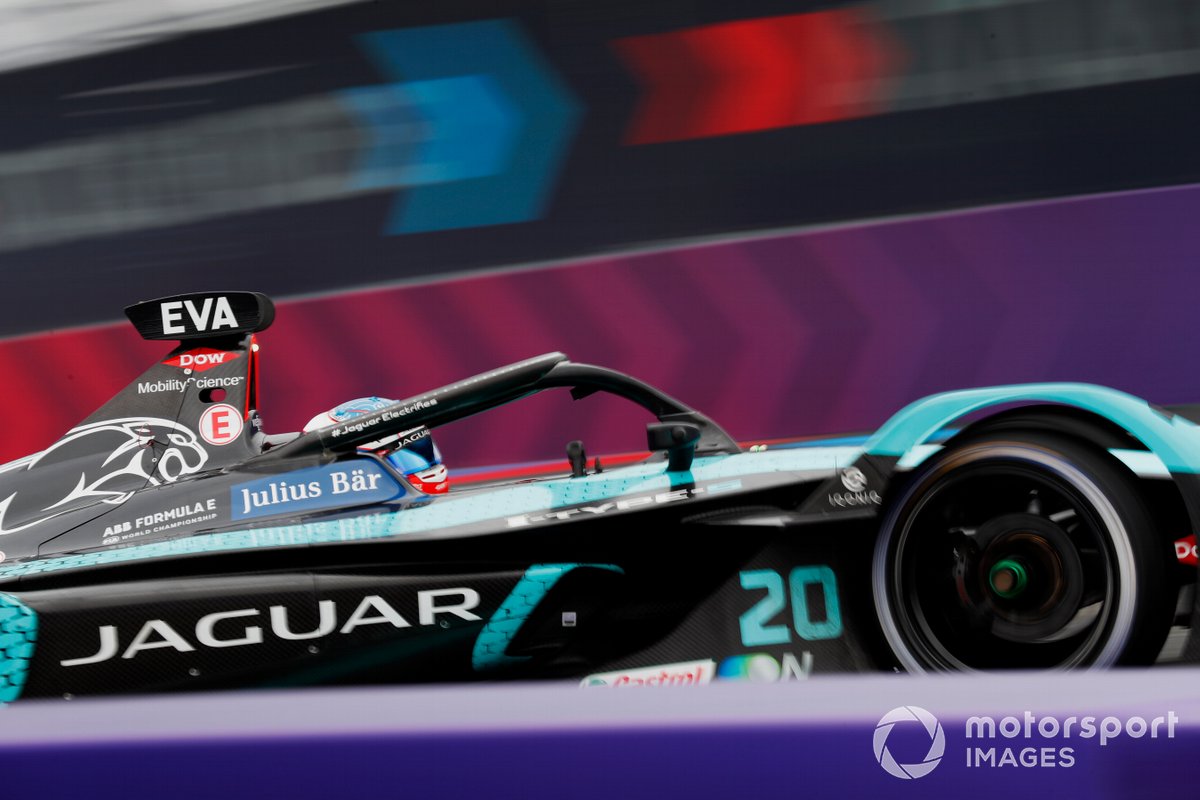 Evans took his second and final attack mode three laps later, passing his friend Cassidy at the inside of Turn to resume the runner-up spot around 1.8s behind Bird.

But Evans was again overconsuming energy and it appeared as though Cassidy was lying in wait for a potential second place as the top four, including Antonio Felix da Costa broke away.

It looked like Jaguar might convert its 1-2 but then as in qualifying, Evans ran too wide at the exit of Turn 6 and clattered the outside wall which broke his left-rear suspension.

His was able to continue but was immediately toppled by Cassidy and then da Costa, with the dicing Porsches of Pascal Wehrlein and Andre Lotterer also filing past.

That delay allowed Bird to deliver a remarkable victory and propel back into the title hotseat, with Cassidy now the most in-form driver in the series after two podiums and a fourth from the most recent three races.

Da Costa bagged a podium after rectifying the balance problems that plagued his Saturday outing, while Wehrlein kept ahead of his team-mate Lotterer in the battle for the top five.

Alexander Sims, some way adrift of the leading train, managed to catch and pass the stricken Evans, who eventually slid all the way down to 13th.

Norman Nato arrived home seventh as Robin Frijns climbed from 21st to a remarkable eighth - now tied second with da Costa - ahead of the Mahindra Racing machine of Alex Lynn.

Sergio Sette Camara went on an early passing spree before the usual race energy management woes for Dragon Penske Autosport reared their head and he declined to 11th.

Long-time Formula E rivals Lucas di Grassi and Sebastien Buemi also notably collided in the race down at Turn 1, with Buemi spinning down to 15th.

Di Grassi copped a 10s penalty to slide to 14th.