Jack Doohan took his second FIA Formula 3 win in the second sprint race at Spa, which was marred by safety cars amid more wet conditions.

The Trident driver took 15 points after starting in pole, where he will also start for tomorrow’s feature race. He sits second in the drivers’ standings behind Prema Racing's Dennis Hauger, who finished in ninth.

He finished ahead of team-mate David Schumacher and Charouz Racing System’s Logan Sargeant, who had started in fifth.

The race finished behind the second safety car of the race after a collision at the Eau Rouge/Raidillon section – the third of the weekend after a huge collision in W Series qualifying and Lando Norris’ shunt in Formula 1 qualifying.

The race started in the dry after the earlier rainfall, albeit still with significant spray.

Alexander Smolyar was forced wide on the first lap, while Logan Sargeant moved up from fifth to third and Vesti made up three places to move up to sixth.

By lap four, Doohan had settled into a comfortable three second lead ahead of his team-mate Schumacher. 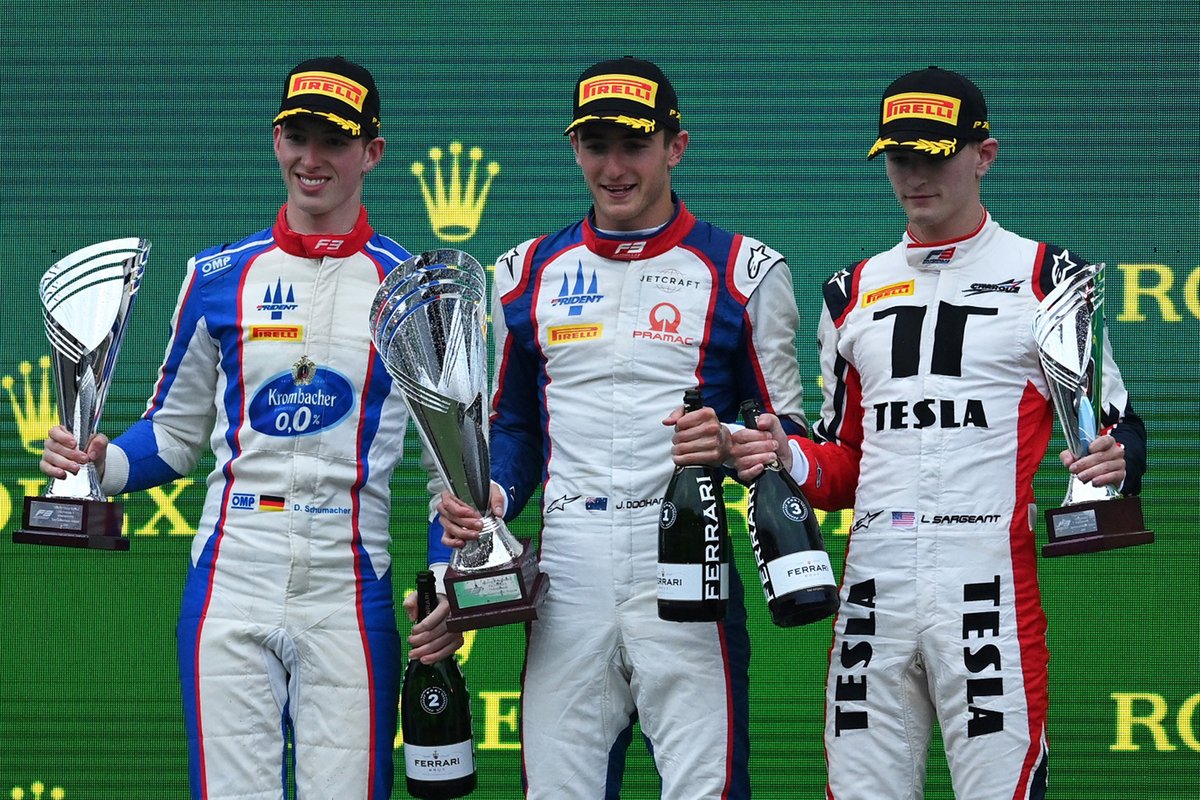 Johnathan Hoggard was sent spinning by Arthur Leclerc while defending in ninth into Pouhon, and was closely followed by championship leader Dennis Hauger, while Hoggard was sent to the back of the pack.

The two went on to tussle but Leclerc maintained his position.

At the halfway point, Doohan had built a 3.4s lead from Schumacher, while the darkening clouds suggested an imminent downpour.

Amaury Cordeel was handed two five-second penalties for repeatedly exceeding track limits at Turn 9, while several other drivers were cautioned for the same move.

A virtual safety car was prompted after Matteo Nannini span into the final chicane on lap 10, braking off the racing line before losing the rear, almost making contact with Hunter Yeany.

The rain eventually fell on lap 11, with a full safety car emerging to control the pack until the end of lap 13.

As the green flag was waved, Doohan maintained his lead, while Hauger passed Leclerc at La Source to take another point for his championship campaign.

But the safety car was deployed again just moments later, with another crash at the top of Raidillon involving Calan Williams of Jenzer Motorsport and Amaury Cordeel of Campos Racing, with both drivers emerging from their cars unaided.

Due to the extensive clear up and tricky conditions, the race finished behind the safety car.