ART Grand Prix driver Hubert was announced as a Renault-affiliated driver at the opening Barcelona round, and was given the target of winning GP3 to become one of its academy drivers.

Artem Markelov is Renault's test and development driver while fellow F2 racer Jack Aitken is part of its academy. Both have driven the team's F1 car in tests this year.

Hubert has regularly visited Renault's Enstone factory this year, carrying out training while also getting time in its F1 simulator.

"I think they [Renault] are happy with my performance, I am leading and that was the target they set for me," said the 21-year-old.

"As long as the championship is not finished, I won't know if I've done enough or not.

"The initial target from them was to win the championship. "If we win I should become a driver of the academy, if I don't win, I don't know! "It would depend on why I didn't win.

"I know that I have to win to get to F2, I think it will be very difficult to get to F2 without Renault's support." 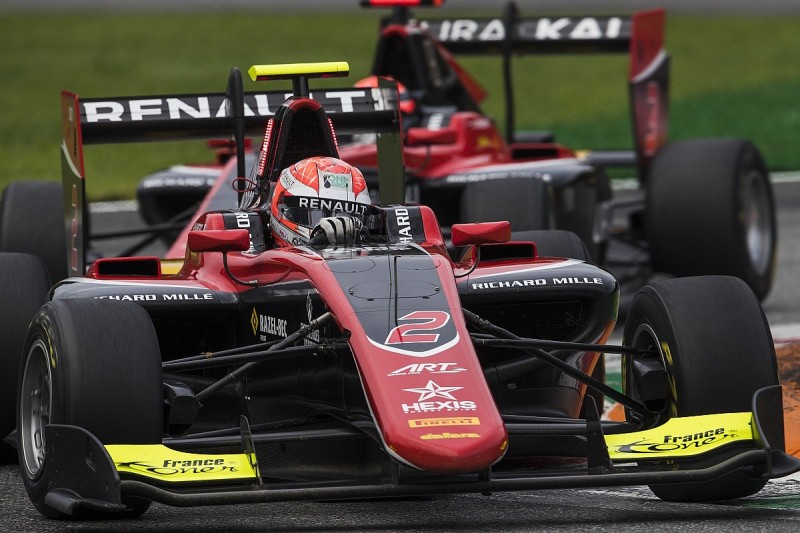 He said he feels no extra pressure with two rounds remaining, in Russia and Abu Dhabi, knowing Renault is constantly monitoring his performance.

"The fact that Renault gave me this target doesn't add any pressure because I'd already set this target for myself," he added.

"Always when you have these kind of people looking at you, you know it's important.

"But I'm just doing my job and taking this advantage to try and improve myself more, it's a chance [rather] than additional pressure."

Remarkably, Hubert managed to extend his points lead after being disqualified from the Monza sprint race last weekend, when his left-rear tyre pressure was found to be below the permitted level.

Ilott was disqualified for the same offence, having finished ahead of Hubert in the race - which meant the gap between Hubert and the Briton increased.

"When I left the circuit I knew we were under investigation and the engineers were trying to figure out what happened," said Hubert.

"I'm sure they weren't trying to cheat because it's stupid.

"You could maybe gain an advantage but you can be sure that it will be controlled [by scrutineers].

"It was maybe a mistake in the calculation.

"I've done some mistakes before, I'm not angry and I know it won't change anything in terms of the performance of the car."