Renault Formula 1 junior Anthoine Hubert has revealed he had a broken radio in the opening Formula 2 race of the season, in which he was the highest finishing rookie

Reigning GP3 champion Hubert started 11th on the grid on his debut with the Arden team, but made the most of excellent tyre management to pass three cars late on and take fourth behind a group of drivers with three or more F2 seasons' experience.

It was Hubert's first race in a single-seater involving a pitstop which further complicated his radio problem.

"I didn't have the radio, it was not working before the start," Hubert told Autosport.

"I was worried as the team told me all I had to do in the race was manage the tyres and listen to the engineers, they would tell me if I needed to push more or less.

"Starting my first F2 race without a radio was not easy.

"Especially to plan the pitstop, it was my first race with a pitstop.

"I did it on feeling so it seemed to work quite well.

"In the race, I used my experience from GP3 to save the tyres."

Instructions from engineers can be vital for F2 drivers as there are no tyre temperature sensors on the car.

Drivers have to look after the tyres on feel, and engineers can advise competitors of their pace relevant to other drivers to help manage degradation.

Hubert's result was all the more impressive given Arden's apparent lack of pace in pre-season, although Hubert said before Bahrain that the squad had better race pace than qualifying speed. 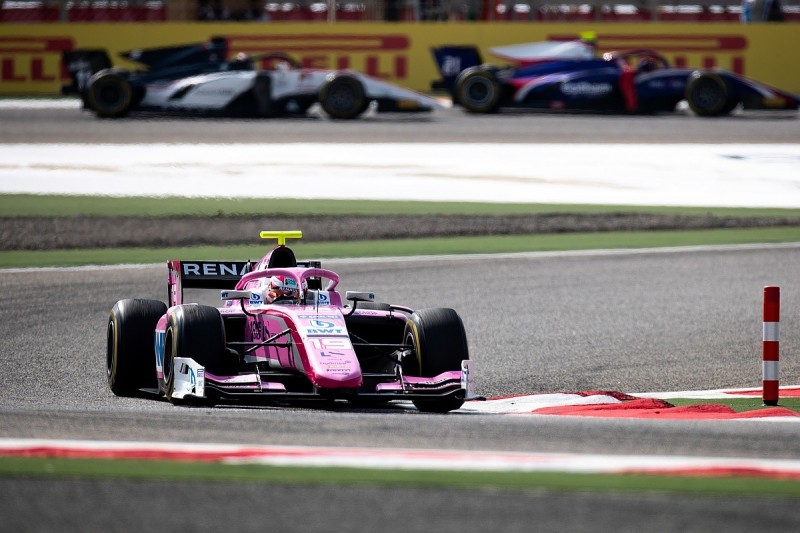 "It's a really good first feature race for us, but we need to stay calm, stay humble," added the 22-year-old.

"Before coming to Bahrain, my expectation was a lot lower than what we did this weekend so we need to keep working hard because it won't be easy to do that.

"I'm looking for some consistency, I want us to be regularly in the top 10 and then when we have the possibility to do more, let's go and get more like we did in race one.

"All the energy and motivation everyone has in the team, I think it was really important to reward them with a good result this weekend.

"It gives me extra motivation to do more to see that we can do this in the next rounds.

Hubert executed the same strategy as eventual winner Luca Ghiotto in the sprint race by making a pitstop - in Hubert's case due to heavy degradation in the soft tyre - but failed to extract a significant amount of pace from the supersoft tyre and finished ninth.

"We didn't do a good race and we still finished ninth," he added.

"Before the weekend I expected to finish around ninth while doing everything really good, so it's good that finishing ninth with a bad race is still a positive."