Alfa Romeo Formula 1 junior driver Tatiana Calderon has been given a three-place grid drop for the next Formula 2 round at Barcelona after crashing in the Baku sprint race.

Calderon attempted to dive up the inside of Turn 2 at the start of the Sunday race but locked her tyres and pushed Ralph Boschung into Louis Deletraz, ending all three drivers' races.

"I got too good a start and too good an exit out of Turn 1 and I just misjudged the braking and that ended the race of me and some other guys," Arden driver Calderon told Autosport.

"I apologise and I hope that we can carry some good things we learned here in Barcelona."

An F2 statement said the stewards had ruled "that Calderon had made an overly ambitious move on the Trident driver, not on the racing line, and was unable to make the corner which caused the collision with Deletraz a collateral victim." 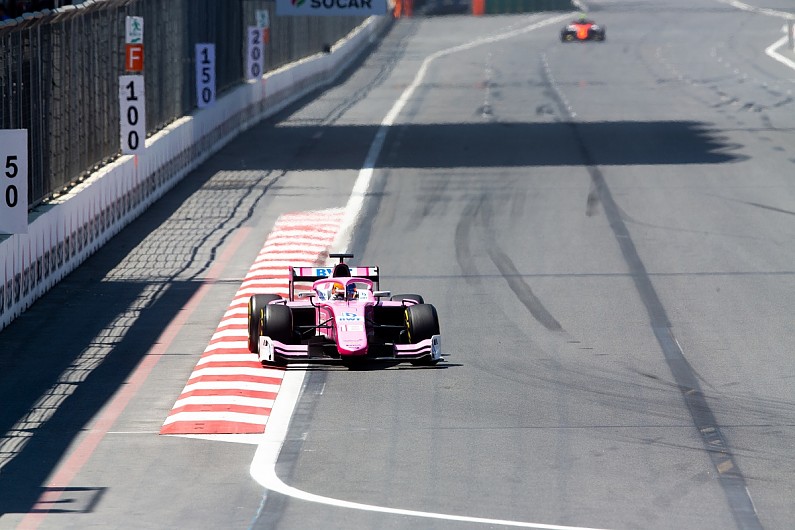 Calderon had retired from the feature race one day earlier. She stalled on the formation lap, but took the lead as the only driver to start on the medium tyre.

An alternator problem later struck after she had been passed by the frontrunners on the alternate strategy.

Calderon took a 13th and a 15th at the opening round in Bahrain and said that her biggest weakness so far has been qualifying in what is her first season in F2, having finished 16th in GP3 with Jenzer Motorsport last year.

Mahaveer Raghunathan was also penalised on Sunday in Baku.

The MP Motorsport driver was deemed to have passed Renault Formula 1 junior Guan Yu Zhou before the control line at a safety car restart.

Five seconds has been added to Raghunathan's time, but he had already finished last.