Ferrari Formula 1 junior Mick Schumacher believes he had "the potential to go further forward", despite rising 14 places to take fifth in the Baku Formula 2 sprint race 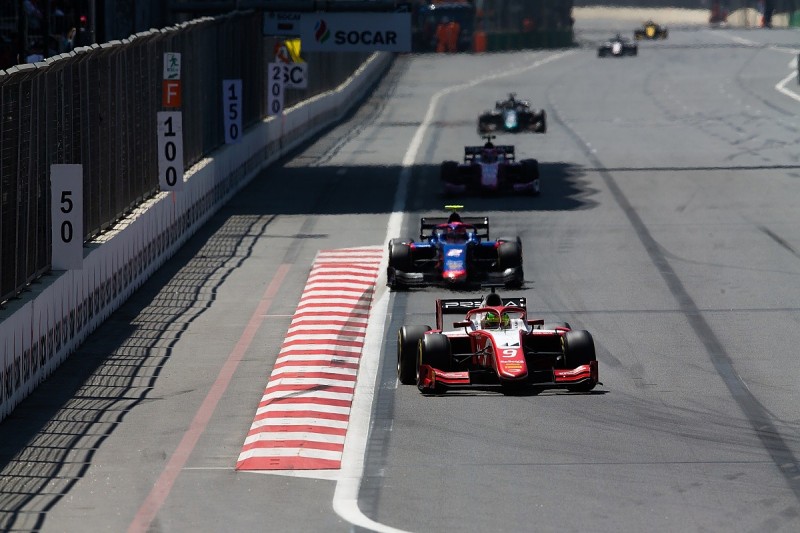 In his second round of the series, the reigning European Formula 3 champion was running in the top seven when he spun at Turn 16 in Saturday's feature race, and was unable to restart.

Schumacher said that he believed he could "save" the weekend after the "costly" spin, and delivered on that promise by passing Prema Racing team-mate Sean Gelael on the last lap of Sunday's sprint race having started in 19th position.

Although safety cars usually help charges from the back of the grid by bunching the pack, Schumacher said he felt he had the pace to move through further without them.

"Coming from where I started we can say it has been a positive race," said the 20-year-old.

"The start was very good even though I was conservative as I thought there might be some chaos which actually happened.

"In general, though, the safety car situations didn't help.

"Yes, they regrouped the cars, but the pace I had was really good and I felt I found a good window with the tyres.

"We had the potential to go further forward.

"We can be happy with P5 and we also missed the fastest lap by just four thousands of a second.

"We didn't maximise it in race one, but we learned from that and now we will try to make another step forward."

Schumacher also used his tyres wisely in the Bahrain season opener to take eighth on the last lap, and while he couldn't maintain his reversed-grid pole position in the sprint race, he took a solid sixth place.

Added to the fifth in Baku, he lies ninth in the F2 points' standings.