Red Bull’s Max Verstappen says he had suspicions regarding Mercedes’ rear wing flexing, in explaining why he touched Lewis Hamilton’s car in parc ferme after Formula 1 qualifying in Brazil.

The championship leader was fined €50,000 for touching Hamilton’s rear wing after he finished second to his title rival in conventional qualifying on Friday at Interlagos, with Hamilton’s car later failing the FIA’s post-session technical checks as its DRS was found to be opening the wing more than the permitted distance.

After an overnight investigation, the Brazilian Grand Prix stewards opted to disqualify Hamilton from qualifying, while a separate examination of Verstappen’s actions leading to his fine.

When asked by Autosport to explain why he had touched Hamilton’s car – as well as his own shortly beforehand – Verstappen replied: “Well, I was clearly looking at the wing.

“So, yeah, I mean, you can see on the video what I did exactly. I was just looking at how much the rear wing was flexing at that point.”

Pressed further during the post-sprint race press conference that followed the 24-lap event won by Valtteri Bottas, after the Finn beat Verstappen away from his inherited first place grid spot, the Dutchman said his actions “had nothing to do with the DRS – what they [the FIA] were looking at”.

In response to a question that asked if he had had any specific suspicion that he subsequently moved to directly inspect on Friday, Verstappen stated that he had and then explained that it was related to the new load and deflection tests that were introduced at the French Grand Prix, following a furore over flexing wings at F1’s two leading teams during the early rounds of the 2021 season. 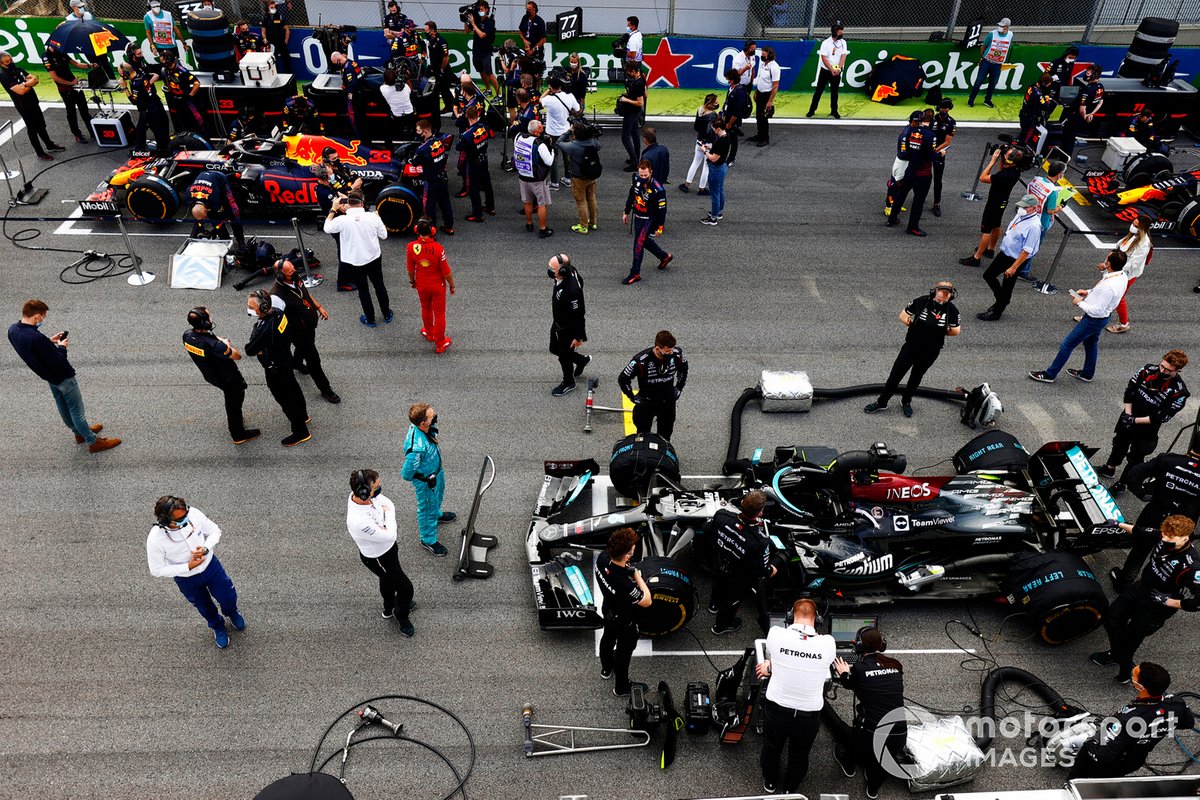 Mechanics on the grid with the cars of Max Verstappen, Red Bull Racing RB16B, and Valtteri Bottas, Mercedes W12

Intrigue has continued to follow this area, with the varying downforce and drag levels produced by both the RB16B and the W12 often giving either Red Bull or Mercedes an edge at certain tracks.

“Of course you know we had, at the beginning of the season, to all change the rear wings a bit because of the back off [of the rear wing at high speed].

“But it seems like something is still backing off over there [at Mercedes]. So, that’s why I went and had a look.”

Verstappen also joked that he hoped his sanction – “quite a big fine” – would result in officials having “a nice dinner and a lot of wine!”

He added: “I hope good, expensive wine – that would be nice. They can invite me for dinner as well – I’ll pay for that dinner too.

“I do have to pay [the fine, not Red Bull]. So that’s a little bit less FIFA points for me then on my laptop.”