In the only practice session that takes place in similar times and temperatures to qualifying and the race, Verstappen’s best time of 1m30.847s was 0.547s quicker than the lap he completed to top FP1 on Friday afternoon.

In the second 60-minute session of the day, the field was quickly on track, with Alfa Romeo’s Antonio Giovinazzi setting the initial benchmark at 1m32.495s on the hard compound tyre.

Yuki Tsunoda and Ferrari duo Charles Leclerc and Carlos Sainz Jr quickly shuffled Giovinazzi down the order with their initial runs on the medium tyres, before Hamilton took the top spot with a 1m31.674s – also on the yellow-walled medium rubber.

But the world champion’s first flying lap was deleted for exceeding track limits on the outside of the wide Turn 4 right-hander, which the FIA had not been strictly policing in FP1, and that promoted Verstappen’s opening effort on the mediums – a 1m31.842s – to P1.

Valtteri Bottas then took over at the head of the field with a 1m31.503s before Hamilton’s second run on the mediums took him clear on a 1m31.261s – either side of Kimi Raikkonen going off and damaging his Alfa.

The Finn lost the rear of his car as he got on the power coming out of the Turn 2 left-hander and he half-spun through the Turn 3 right kink and went sideways into the gravel trap on the outside of the track.

Raikkonen hit the wall with both ends of his car, ripping its front wing off and damaging its rear wing end plates, but was able to escape the incident and tour slowly back to the pits.

There was something of a lull in action after 15 minutes before the pack sporadically remerged running the soft tyres. 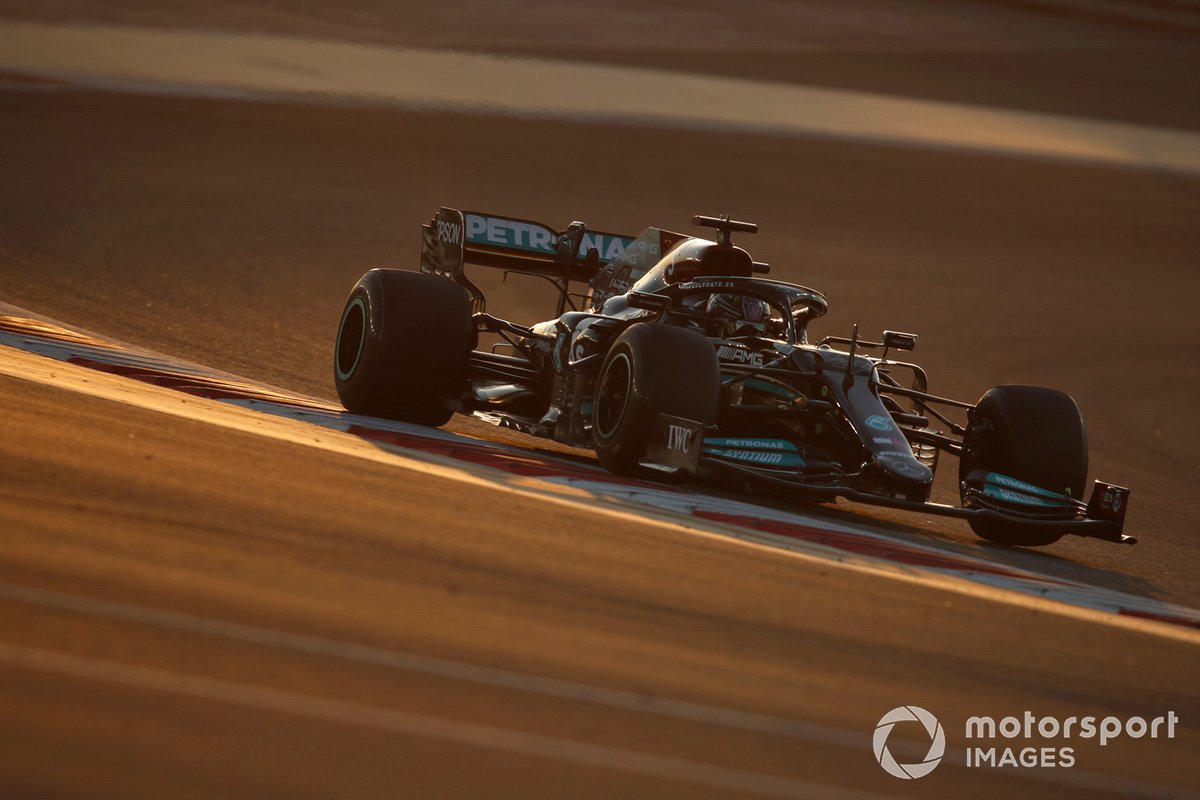 Sainz used the red-walled tyres to go top on a 1m31.127 with 25 minutes completed before Hamilton retook the top spot on a 1m31.082s – also on the softs – gaining in time in the middle sector but appearing to struggle for tyre life as he approached the final turns.

Just before the 30-minute halfway point, Norris, who had a brief off in the early laps at the downhill right/left of Turns 6/7, then jumped into first place on the softs with a 1m30.942s before Verstappen began the lap that would ultimately end up as the session’s best – crucially taking the best sector times in the final two thirds.

The field then switched the traditional FP2 long-run data gathering, albeit in a much-smaller window thanks to 2021’s practice time reduction.

Sainz headed Bottas – who complained his W12 was “undriveable” towards the end of his long-run in the final part of the session – in the final times, with Leclerc finishing down in P12.

Daniel Ricciardo was sixth in the second McLaren, ahead of Tsunoda (AlphaTauri) and Aston Martin’s Lance Stroll.

Pierre Gasly and Sergio Perez rounded out the top 10 for AlphaTauri and Red Bull respectively.

Esteban Ocon was another driver to have a time deleted for running too wide out of Turn 4, but he was able to better that lap in any case and he finished 11th as the lead Alpine driver, with his team-mate Fernando Alonso down in P15, just behind Sebastian Vettel.

Haas rookie Nikita Mazepin spun off coming out of Turn 6 during the opening minutes and later ended up 20th and last in the final standings.