The images of the Haas Formula 1 car may not have been the finished article, but they still gave us answers about how teams are interpreting the 2022 rules.

Although the VF-22 may be different when it appears at the first test, the early snapshot was enough to provide some insight into how teams have approached things in a different way to the FOM show cars we saw last year.

As F1 now builds up for a run of launches this week, including Red Bull, Aston Martin and McLaren, there are some key areas that can be focused on where teams may make different choices in their quest for performance.

One area where teams did things very differently in the past was with car length.

If we compare this year's rules to last year's, we'll note that whilst the wheelbase (the measurement between the axle lines) might not seem dissimilar to the cars we've had recently, the introduction of a maximum wheelbase measurement will stop them from increasing further still. 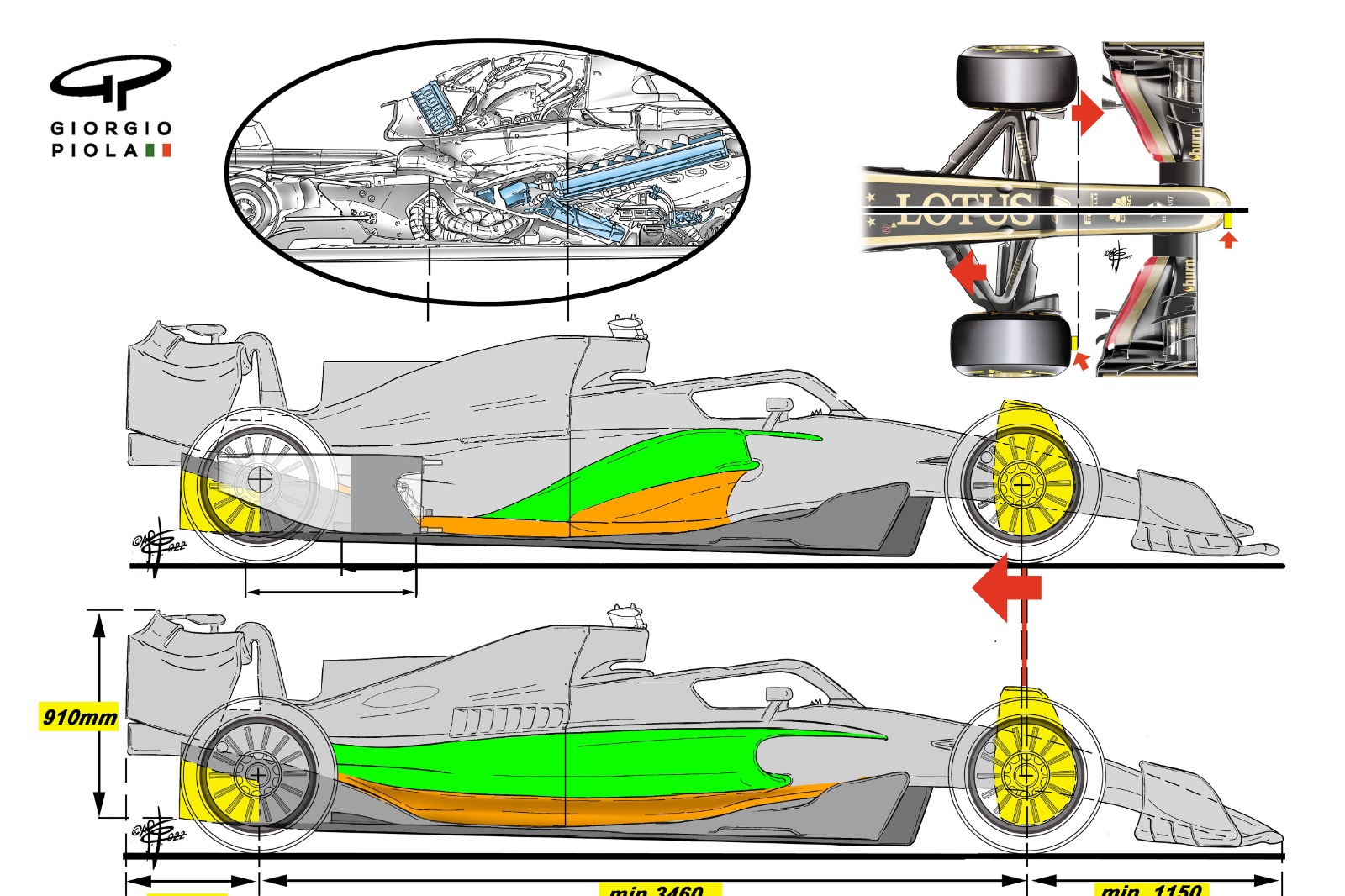 As seen in the illustrations of the 2022 cars, the area where we might see the most design divergence is in the sidepods. The green highlighted bodywork shows the general shape of the sidepod, whilst the orange highlight depicts the undercut region.

The new regulations alter numerous criteria that have an impact on their design, such as the upper side impact protection spar. This is now required to sit at least 60mm higher than before, and all but rules out the use of the high inlet designs that Ferrari introduced in 2017 and the entire grid ran last season.

The introduction of several reference volumes, plus surfaces that must be adhered to in regards to the design of the sidepod and engine cover, will also prevent teams from using winglets and fences in the immediate vicinity of the sidepod's inlet.

However, as we have already seen from the Haas livery reveal, teams will be prepared to think very differently to the options presented by FOM.

Whereas the FOM show cars and renders suggested long, high-waisted sidepod bodywork, with a supplementary cooling panel in some instances, the teams will more likely adopt much shorter and aerodynamically beneficial designs as they have over the course of the last few years.

As is always the case, this will be dictated by the components that are housed within, with the designers looking to tightly shrink-wrap the bodywork around a variety of radiators, intercoolers and electronics that are all packed inside and require a supply of cold air to operate at their optimum.

At the rear of the car, there will undoubtedly be some decisions to be made over the design of the transmission casing.

This can not only have an impact on the wheelbase and positioning of other structures and elements, but it can also influence the design of the coke bottle region.

Circling back to the front of the car, the shape of the nose cone is also much more tightly constrained for 2022, as the sport makes another attempt at forcing teams into a more aesthetically pleasing lower tip and domed upper surface that also blends well with the shape of the chassis.

The wholesale change in how the front-end aerodynamics connect to those in the middle of the car might see teams make different choices than they have in the past in this respect. It's something that we've seen teams correct during the course of a season too, with the Lotus E21 being the most recent recipient of such an alteration.

Therefore, it will be interesting to see how each of the teams manage this positioning, and if there's any changes as time goes by as everyone converges towards the best solution. 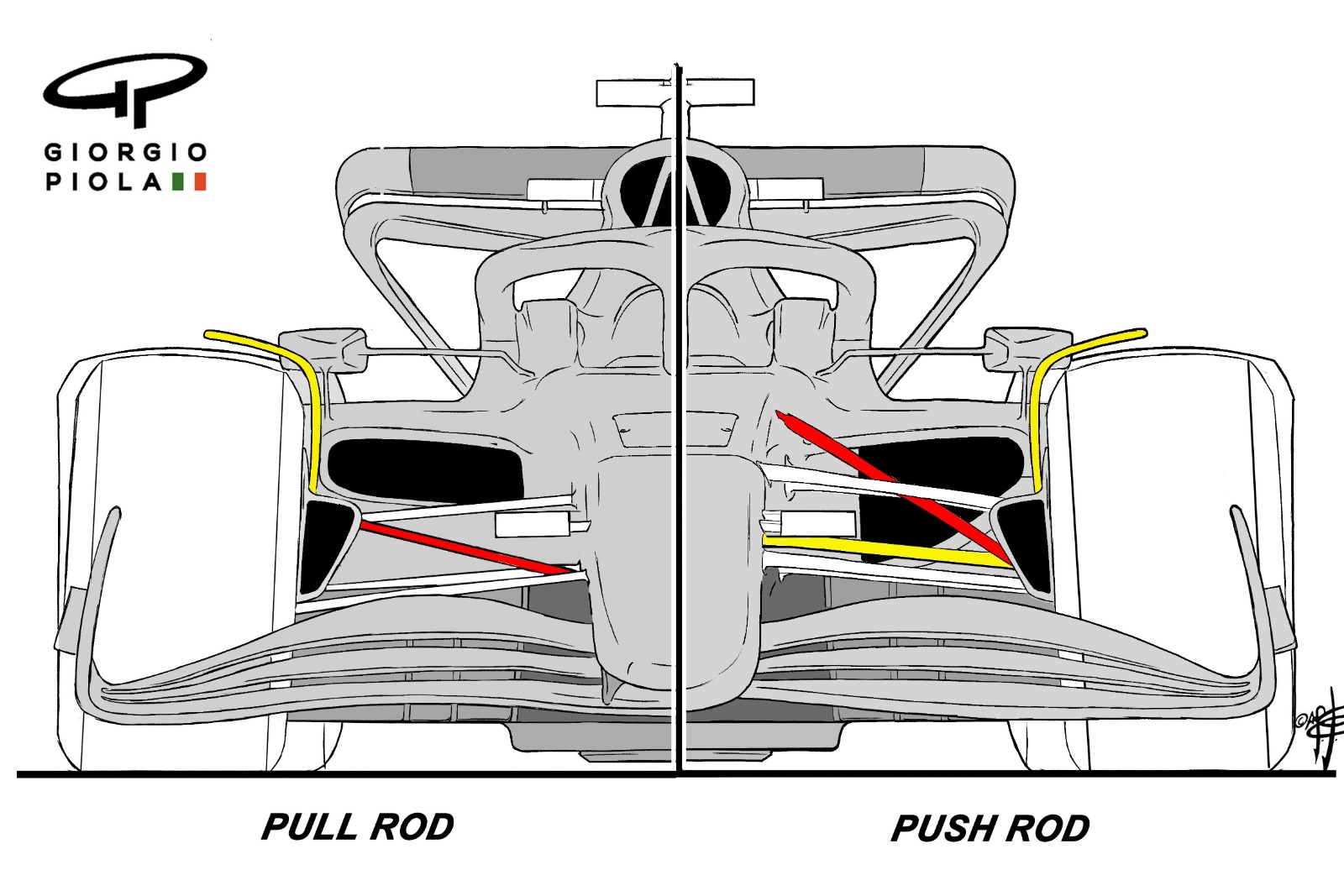 Another area where we might see teams make different design choices is with the front suspension, as there's already a suggestion that McLaren will make the shift to pull rod, rather than push rod, as it did in 2013.

Ferrari has the most experience of this in recent years, having used the layout between 2012 and 2015. Although it usually shares commonality in respect of these parts with Haas, whose render shows a push rod layout, there's still a chance we could see both teams move in the opposite direction when the actual cars emerge.

Overall, it's another design decision where aerodynamics takes precedence. Should teams feel that the layout offers more scope for design variety elsewhere, such as the design of the sidepods and leading edge of the floor, then they'll deal with any shortcomings that it might present.

The packaging of a pull rod suspension within the chassis also results in a small Centre of Gravity improvement. However, it can make life a little more difficult for the mechanics when preparing the car or making setup changes, owing to reduced access. 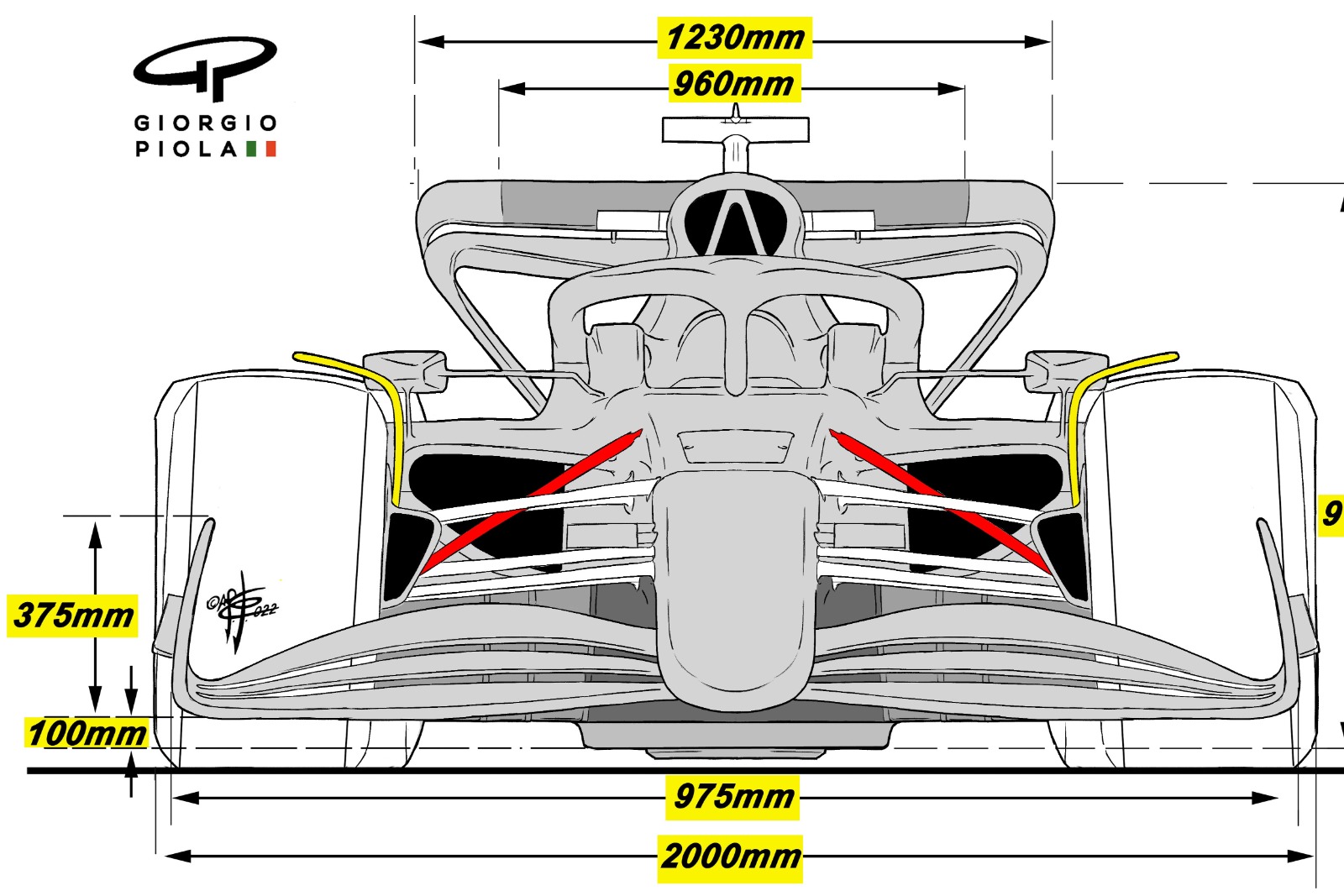 The design of the front wing has been simplified once more, with the neutral central section of the mainplane done away with in order to eradicate the Y250 vortex that had become a powerful tool used by the teams since its introduction in 2009. The wing will also sit 25mm higher than it did before, mounted 100mm above the ground, rather than 75mm.

A maximum of four elements will form the wing span, which are bookended by the upswept endplate and the nosecone.

The endplate will no longer have an outer footplate, which had previously been used to help with outwashing flow across and around the outer face of the front wheel assembly.

Meanwhile, the strakes that had previously been mounted beneath the wing and served a similar purpose have also been discarded.

The overall width of the wing also remains at 2000mm, but only by virtue of the dive planes mounted on the outside of the endplate, which make up the final 25mm each side.

Returning to the rear of the car, it's also worth noting that the rear wing will sit higher, as we edge back towards the height of the wings used between 2009 and 2016 (950mm). Now it has been increased from 870mm to 910mm.

This is an unsurprising decision, as the goal of both regulation changes was to improve the racing. To do that, you need to change the wake generated by the lead car.

Increasing the rear wing's height is not the only change though, as the width of the upper section of the assembly is increased to 1230mm, rather than 950mm, resulting in a design that encroaches on the tyre's footprint below.

All of these changes will undoubtedly have an impact on the height of the wake being generated, with the volute-shaped endplates introduced in 2022 taking things a step further than before in order to redefine the shape of the wake created.

The beam wing also makes a return, having sat on the sidelines since 2014. Whilst the Haas render showed just a single element, there's the possibility for teams to use up to two elements.

The diffuser is also altered considerably, owing to its pairing with the revised underfloor venturi tunnels ahead. The new dimensional criteria that the designers must work with is a narrower exit of 750mm, compared with 1050mm. Also a much taller exit of 310mm is possible, compared with 175mm under the previous regulations.

Whilst the Haas and FOM renders or their show cars haven't shown it, DRS is still being employed too, with the moveable flap section unable to take up the full span of the wing owing to how the outer portion of the flaps merge with the endplate.

The moveable section can be up to 960mm wide and, like its predecessor, have an 85mm opening when deployed.