Silverstone bosses took the opportunity to renovate the entire 3.1-mile circuit after pressure from MotoGP promoter Dorna to make parts of it smoother to ride on.

MotoGP riders have been pushing for certain circuits to be resurfaced to make them smoother to ride on, with Silverstone one of several F1 tracks in the firing line.

Silverstone managing director Stuart Pringle explained that the circuit had gone beyond what Dorna requested because it spotted the chance for a rare overhaul, which was carried out in February.

"When we looked at it, the asphalt at Silverstone hadn't been re-laid since 1996 [pictured below]," said Pringle. 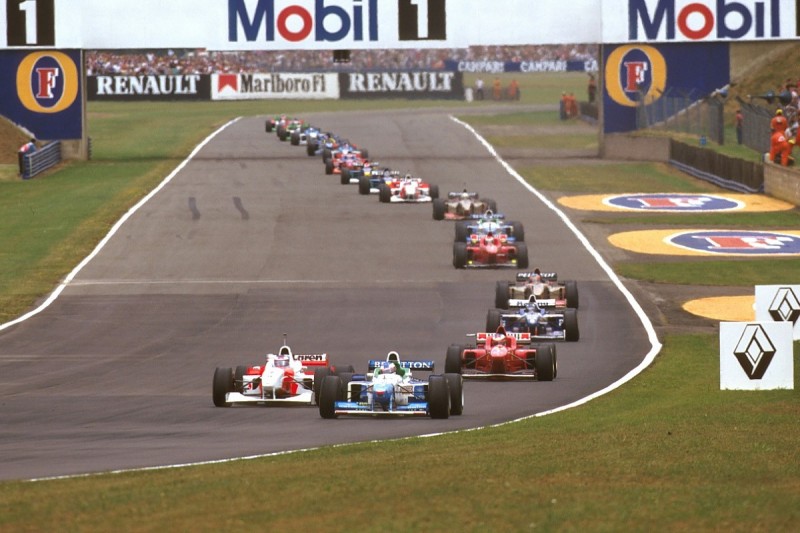 "The surface was looking a bit patchwork, so we decided to resurface the whole thing while we had the chance, and we have gone for the best surface we can.

"Some of the bumps have been removed too, and we are looking at a lap time gain of about one second per lap for an F1 car.

"All the categories that compete on the GP track will be able to circulate at lap record pace - and it will offer more grip in the wet as well.

"It is an exciting development for Silverstone."

The current Silverstone GP circuit has only been in use since 2010, which meant Lewis Hamilton's 1m26.600s pole lap last year in the much-improved 2017 breed of F1 car was around three seconds faster than the previous best.

Lap times in the 2018 season-opening Australian Grand Prix suggest this year's cars will be at least one second faster, which means Silverstone's work will double the pace increase year-on-year.

"F1 teams spend millions of pounds looking for a one-second-per lap improvement, but we have been able to deliver one with the work that we have done in February," Pringle added.

Spanish GP venue Barcelona, Austria's Red Bull Ring and the Austin track in the US are other circuits to receive criticism from MotoGP riders thanks to F1's high-downforce cars creating ripples in the asphalt, which causes a more dramatic problem for the bikes.

Barcelona was completely resurfaced over the winter while the Austin circuit is working to reduce the bumps in its track surface for next month's MotoGP race using grinder trucks and focusing on the first two sectors from Turn 1 to Turn 12.

F1 tech insight: The aggressive changes Red Bull made for 2018