Cal Crutchlow has sympathy for circuits that host Formula 1 and MotoGP races, following complaints from riders about the condition of the Silverstone track surface.

MotoGP riders have been pushing for certain circuits to be resurfaced to make them smoother to ride on, with F1 tracks including Austin, Barcelona, the Red Bull Ring and Silverstone among those in the firing line.

It is felt that the increased forces generated by this year's faster breed of F1 cars means they are having even more of an effect on the track surfaces, causing rippling in braking zones, and effectively pushing the asphalt across the surface in fast corners where they are generating the most downforce.

"With the downforce of these Formula 1 cars... Spielberg was a joke," said Crutchlow.

"You can't imagine, even on the straight the thing was vibrating and bouncing.

"It was worse than last year, and on a lot of the off-camber corners it was a lot worse, so it means the Tarmac's been pushed because of the cars.

"They've resurfaced a couple of corners here [Silverstone] and they were a lot better, so how about we resurface the whole track? It'd be a lot easier for all of us.

"The problem is that wherever we share a track with F1, the tracks are bumpy within a year [of being resurfaced], so I understand the concerns of the organisers." 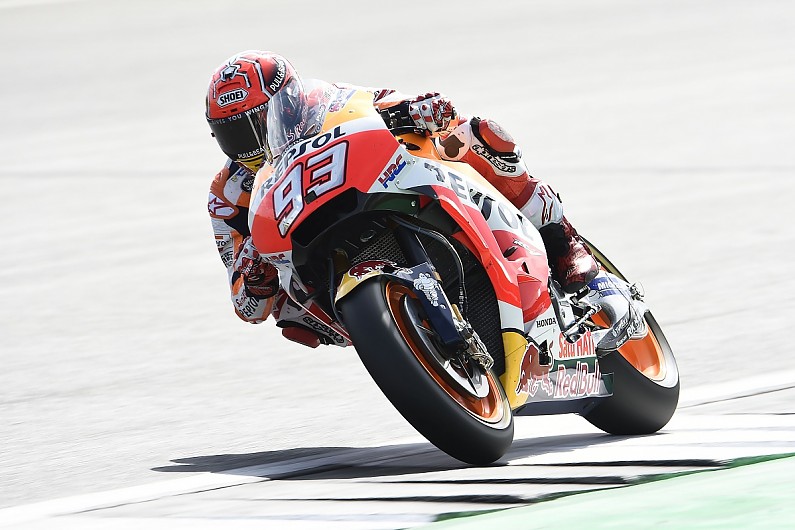 Factory Honda riders Marc Marquez and Dani Pedrosa said they will continue to ask for the circuit to be resurfaced, with Marquez saying he made the same requests last year.

"We have more bumps compared to last year, it's a bumpy track, and again we will ask to re-asphalt all the circuit because it's one of the worst on the calendar," he said.

"Silverstone is a great track but for the future, I remember last year asking, if we continue here, to resurface because it's really bumpy."

Pedrosa added: "We have the problem that we race with Formula 1 also [on some tracks]. It's necessary to resurface, we were discussing that.

"But we don't know how long it will last with a good surface, because we still share the track with Formula 1."

Valentino Rossi said that patching up certain parts of the circuit causes its own problems, as the joins between various surfaces can be troublesome to ride over.

"For me Silverstone is not a lot worse than last year," he said.

"The cars of Formula 1 damage the track but also here you have a lot of different asphalt and the cut [between the surfaces] is in the middle of the corner, so for that reason it is more difficult.

"You need to have an easy bike on the bumps but at the same time with high performance, and to find that balance is not easy."