F1 tech insight: The aggressive changes Red Bull made for 2018

Although last year's RB13 ended the F1 season strongly, the team readily admitted its start to the campaign was not as strong as hoped for.

Red Bull has been much more aggressive with its car this season, and nothing highlights this more than the way it has pushed development in the area around the sidepods.

Last year, it started the season with a very simple sloping twin-element design. By the time the team reached Silverstone it had cycled through numerous iterations of bargeboard design to arrive at something that forms the basis of what it has now.

The more complex arrangement helps with the issue of wake, which is generated by the wider front tyre.

In Hungary, Red Bull further introduced a revised sidepod geometry and three strakes on the leading edge of the floor, before introducing a sidepod deflector panel in Singapore which prompted Sebastian Vettel to suggest it was a direct Ferrari copy.

For 2018, the team has continued where it left off, but rather than copying Ferrari's sidepod deflectors it has now forged its own path. 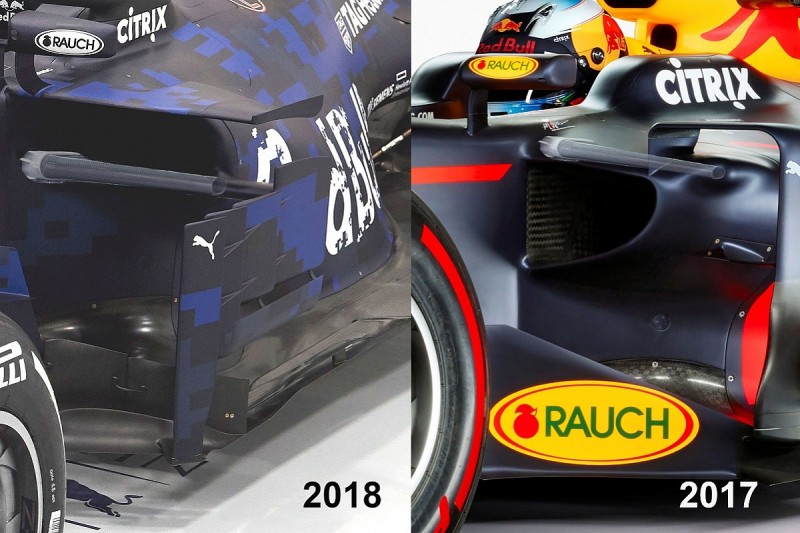 However, it has drawn inspiration from the Maranello team in placing the side impact protection spar (superimposed onto the image above) into a much lower and forward position.

This has in turn allowed Red Bull to push the sidepod inlet rearward away from the turbulence of the front tyres and totally rethink the overall shape of the sidepods. 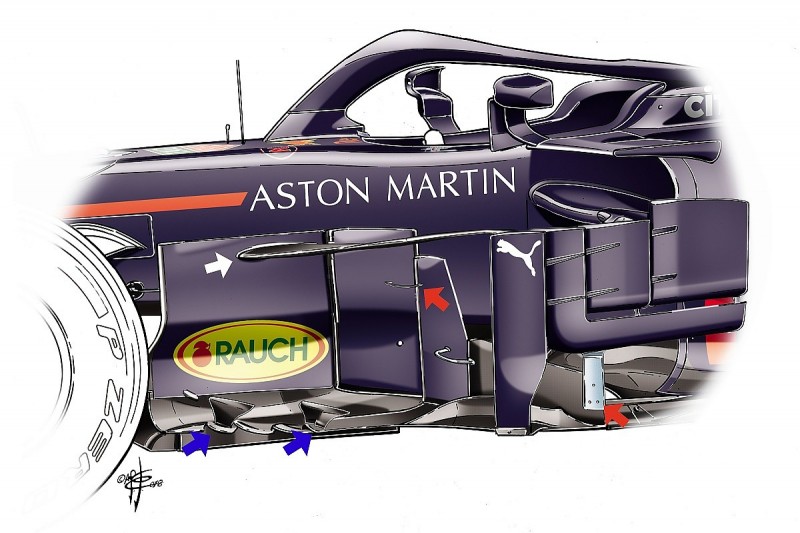 The new multi-element deflectors haven't come without their issues though, as the team quickly concluded the whole assembly moved around too much on the track, often leading to inconsistent results.

As it searched for a sustainable solution, Red Bull opted to run without the deflectors during parts of pre-season testing at Barcelona.

Two new metal supports were subsequently added (red arrows), along with a more elegant boomerang-style winglet (white arrow) that connects the deflector to the forward-most section of the bargeboard.

The boomerang support winglet appears to provide its own aerodynamic improvement too, and is a feature on a handful of other cars up and down the grid already.

Paired with these changes, Red Bull has also mounted a pair of 'r' shaped cascade winglets atop the bargeboards' footplates (blue arrows) as it continues its aggressive approach to development in this area of the car.