Ricciardo came on the radio in the early stages of the Sochi race to argue that he was faster than his team-mate.

His inference was that Vettel should move aside now the German is mathematically out of contention for the championship.

But speaking after the race, Horner said that the pitwall never even talked about the idea of team orders.

"No. There was no discussion about switching," he said. "Obviously it was very early in the race anyway, and so many things can unfold.

"It didn't make any sense at that point."

Horner said Ricciardo's title hopes are so remote that orders would be irrelevant.

"In the end he is 92 points behind with 100 available. He would have to win the last three races with Lewis [Hamilton] or Nico [Rosberg] not finishing, which is a long shot."

Ricciardo was able to jump Vettel later in the race after making an early switch to medium tyres, while his German team-mate stayed out longer on the softs.

Horner said the decision on when to pit Ricciardo was fuelled by blistering on his first set of tyres. 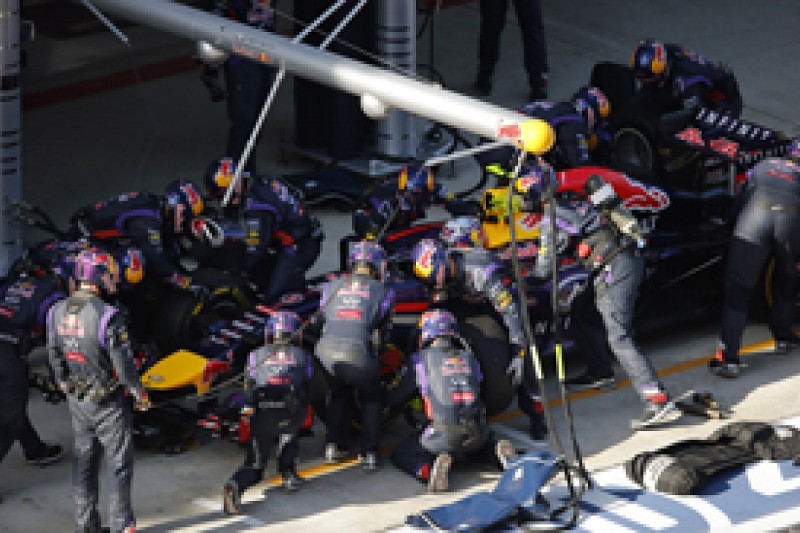 "Daniel's stop was dictated by a large blister that appeared in qualifying on his front right tyre," Horner explained.

"We were monitoring that really closely in the opening laps of the race and it was always going to be quite a short stint.

"With Sebastian, effectively starting from qualifying 11th and having freedom of tyre choice, the brand new soft tyre seemed to make more sense, you got the start performance and it was supposed to be the quicker of the two tyres.

"He had that tyre for approximately half the race and, when we pitted for the prime, we expected the prime to have good performance in the second half of the race.

"But, as it turned out, a new harder tyre had no more performance than an older tyre. So he was only able to do the same times as Daniel.

"And, as we saw with Rosberg and Hamilton , even a tyre that had done the entire grand prix was capable of being very competitive."