Bottas ran a close second to Hamilton in the early stages of F1's inaugural race at the Sochi Autodrom, but fell to third when Nico Rosberg made a lunge down the inside of Turn 2 shortly after Bottas made his solitary pitstop.

This consigned Bottas to third and the Finn suggested after the race that the way his car worked its tyres had hampered his ability to challenge the Mercedes drivers.

"The beginning seemed to be very good and I was not far off from Lewis and everything was going to plan," Bottas explained.

"The tyres were feeling good and suddenly the rear tyres started to go, started to lose pace and I was struggling more and more and Lewis was getting far away.

"Then we stopped for the prime [medium tyre] and it took just a really long time to get it to work.

"It was getting better towards the end - I did my best lap in the last lap of the race. It was really weird.

"And as it took so long to get the tyres to work, Nico got me in Turn 2.

"It was a bit of a surprise for me, didn't expect him to come inside.

"Luckily I saw him in time so there was no contact."

Williams performance chief Rob Smedley suggested Hamilton had just controlled his pace in the early part of the race, and that Rosberg would have passed Bottas even without the Turn 2 ambush. 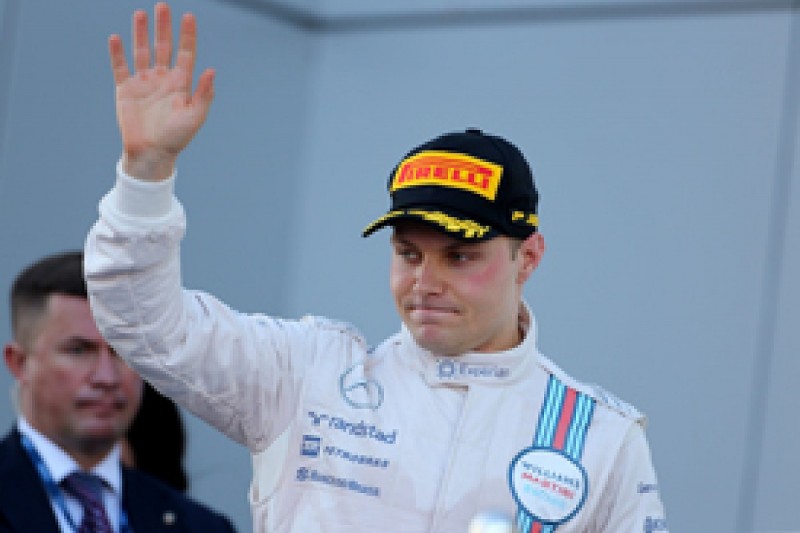 "The reality is, if you look back through Hamilton's first stint - and his second to a certain extent - you'll see all of a sudden there's these anomalous laps where he just puts in a second, 1.2, 1.3 seconds," Smedley argued.

"He's not under pressure, he's going to win the race quite comfortably, and all of a sudden he puts in these laps. That's their real pace isn't it?

"Nico came past - he was on 25-lap older tyres at that point - and he pretty much drove around Valtteri quite easily.

"If it didn't happen then it would probably have happened on the back straight or a lap later.

"I think you're just talking about the inevitable to be honest.

"Valtteri's always very good at being self-critical, and trying to look inward, which is a hugely commendable attribute that he has as a racing driver, but I think the reality is he was beaten by a much, much quicker car."