Following Lewis Hamilton's engine failure while leading the Malaysian Grand Prix earlier this month, Mercedes ran its power units in a mode team boss Toto Wolff initially called not "as spicy" as before.

After coming close to splitting the two Mercedes drivers at Austin last weekend, only to lose second place thanks to the timing of the virtual safety car, Ricciardo believes capitalising on such conservatism might be his team's best hope.

"The last few races, they've been running a bit conservative, I don't know if that plays a role [here]," said Ricciardo.

"If they have to be a bit conservative here, that's good news for us.

"I know we're better off this year than we were last year [with the turbo speed] but I don't know if that's going to mean a few concerns for Mercedes."

The Australian is one of many drivers eager to evaluate the changed grip levels available during Friday practice.

The track was newly-laid last year, and many expect the grip to have increased since, even with teams having relatively low downforce levels thanks to the low air density in high-altitude Mexico City.

"I'm curious to know what the grip's like," said Ricciardo.

"Last year, it was a bit frustrating, the level of grip, and it was really hard to find a balance.

"You just had to make do with a pretty badly-balanced car, but this year we should be able to get a bit more out of it.

"If there is more grip, then it should allow us to run the downforce we want and use the Red Bull strengths."

RICCIARDO NOT WORRIED ABOUT TITLE FIGHT 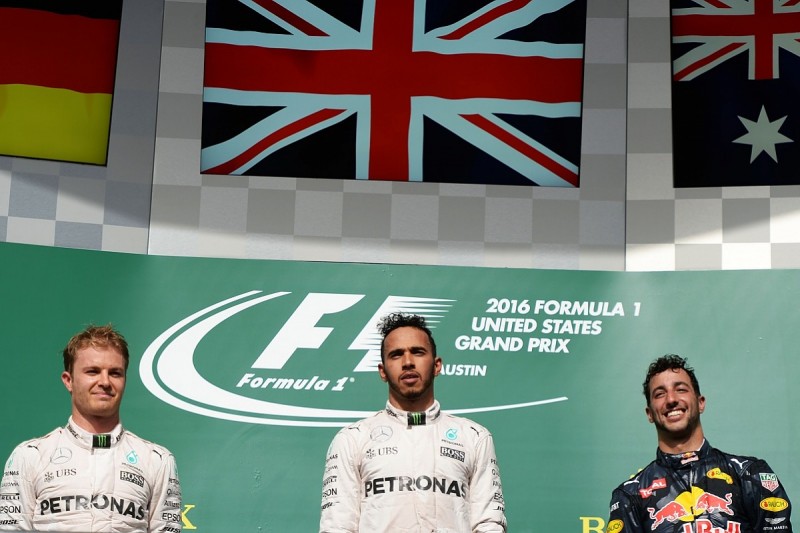 Ricciardo and team-mate Max Verstappen have the potential to be 'spoilers' in the world championship fight, particularly should points leader Nico Rosberg finish behind one or both of them.

But the Australian insists that this is not a concern.

"I'm aware of it, but come Sunday it's completely not in my mind," said Ricciardo of being a championship battle spoiler.

"Whether me getting a good result changes the balance of their championship, it's still not my business or my doing.

"It's just me trying to do what I can in the car. I'll try and get as many points as I can."

F1 title fight: Who is under pressure between Rosberg and Hamilton?