The Marina Bay street circuit is tipped by Red Bull's rivals to suit the RB12 and Verstappen and Daniel Ricciardo lived up to the team's 'favourite' status.

Verstappen ultimately finished quickest with a 1m45.823s lap, 0.049 seconds ahead of his team-mate, with Ferrari's Sebastian Vettel third but almost half a second down. All three drivers used Pirelli's ultra-soft tyre.

Mercedes struggled at this circuit last year, failing to get the tyres working. Lewis Hamilton - who began the session by trialling the halo for the first time - and Nico Rosberg ended 2016's opening practice down in fourth and fifth.

But their times - 0.603s and 0.690s respectively off the pace - were on soft tyres, the hardest of the three compounds available this weekend.

When all the drivers were running on ultra-softs, and on high fuel, earlier in the session, there was little too choose between Red Bull, Ferrari and Mercedes.

Within three minutes of the session starting, Jenson Button's McLaren ground to a halt on track with a fuel system fault, stopping within sight of the pit entry and prompting a virtual safety car.

After being given the green light by race control, two marshals then pushed Button's car back into the pits. 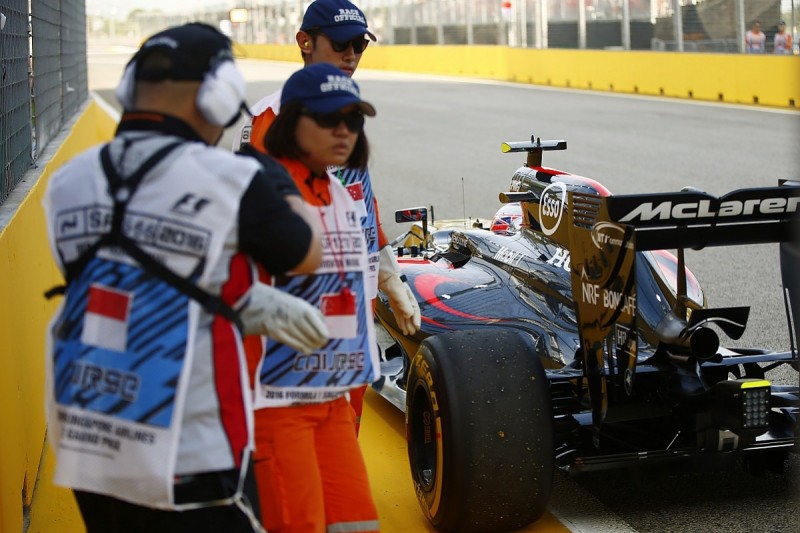 Button eventually returned to the track at the midpoint of the session, but finished 16th and 3.792s adrift of Verstappen, with team-mate Fernando Alonso 11th and 1.4s down.

Once the track cleared for Button's incident, Rosberg set the initial benchmark time with a lap of 1m47.936s on the ultra-soft that was soon bettered by Hamilton by half a second.

A marginal improvement followed from Hamilton just prior to the half-hour mark before he was deposed from top spot by Verstappen by 0.034s.

Midway through the session Rosberg then produced a superb lap on the softs to lead the way by 0.822s from Verstappen.

The lead then quickly changed hands three further times, as Vettel, Verstappen and Ricciardo posted the best times, but unlike Rosberg, all were on ultra-softs.

On his soft tyre run, Hamilton managed to get the edge over his team-mate by 0.054s, with a lap of 1m46.426s for an eventual fourth place.

It was then Verstappen who had the final say to leapfrog Ricciardo into top spot just past the hour-mark.

Late drama followed with 13 minutes to go when Rosberg locked up into Turn 18 on the approach to Anderson Bridge, breaking the front wing as he hit the wall before reversing and cruising back to the pits.

Romain Grosjean finished bottom of the standings and without a time to his name due to the Haas suffering low intake pressure due to a suspected leak.

Mercedes is confounding its own expectations