Esteban Ocon's pace is on a par with Force India Formula 1 team-mate Sergio Perez but still needs to improve his racecraft, according to deputy team principal Bob Fernley

Ocon has scored points in all but one of this year's grands prix and lies eighth in the drivers' standings on 65 points, 17 behind Perez.

Fernley praised Ocon for his feisty start to last weekend's Japanese Grand Prix, in which he advanced from fifth to run third in the early laps, but cautioned the 21-year-old still has a lot to learn from veteran Perez.

"He is getting better, and he's fortunate to have a very, very good team-mate, who is an absolute out and-out-racer, who keeps him very focussed," Fernley said.

"He's still got a little bit to learn in terms of racecraft, and that's where he benefits from having Checo around him.

"On out-and-out pace he's there, but he's young, and he's still got a little bit to go."

Ocon passed Red Bull's Daniel Ricciardo on the opening lap at Suzuka and picked up another position from the handicapped Sebastian Vettel, but ultimately lost out to the faster cars and eventually finished sixth.

"It was awesome fun," said the Frenchman. "The first few laps were great.

"I did a fantastic start, and I was running in front of Ricciardo. 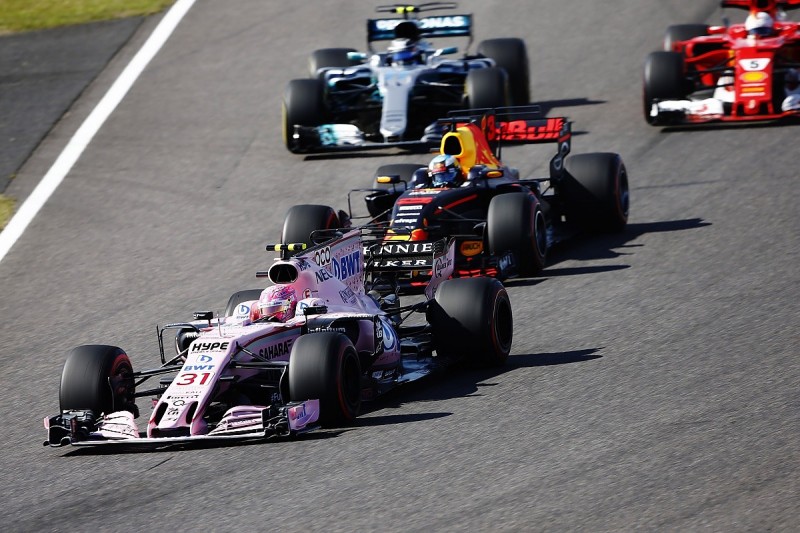 "We had nothing to be scared of behind, nothing to gain in front, so that was the maximum we could have done.

"The important thing was that we brought the car home. We still took some understanding, and I hope we can become stronger and get closer to them."

Force India has all but guaranteed itself fourth place in the constructors' championship and the team enjoyed another strong race at Suzuka, with Perez backing up Ocon in seventh.

"For us it was a textbook race, we just delivered," he said.

"From our point of view we introduced the updates in Singapore, and that's two races where we've been able to get the package right.

"It's a good step in the right direction. We've just got to keep hard at it."

The road-car fad F1 must avoid at all costs