Ferrari F1 drivers believe it is back ahead of Red Bull

Ferrari moved back ahead of Red Bull in the Formula 1 pecking order during the Japanese Grand Prix weekend, according to Sebastian Vettel

Kimi Raikkonen and Vettel were third and fourth quickest ahead of Max Verstappen and Daniel Ricciardo in qualifying, but started eighth and sixth after penalties for a gearbox and causing a collision respectively.

In the race, Vettel recovered to challenge Lewis Hamilton for the final podium spot while Raikkonen salvaged fifth place, ahead of Red Bull's Daniel Ricciardo.

"There has been a lot of positives this weekend, despite the penalty, the qualifying was very strong," he said.

"The pace of the car was good in the race - we were the second quickest car out there.

"I'm not entirely happy because if the podium is there for grabs and you don't take it then it always feels a bit disappointing.

"But a lot of positives we learned about the car for the future as well.

"If you compare here to Silverstone, in terms of track characteristics are similar plus the fact it was quite windy, we've improved a big amount since that time."

When asked by Autosport if he had confidence Ferrari could fight with Red Bull in the remaining four races and reclaim second place in the constructors' championship, Raikkonen said: "This weekend we had the speed. 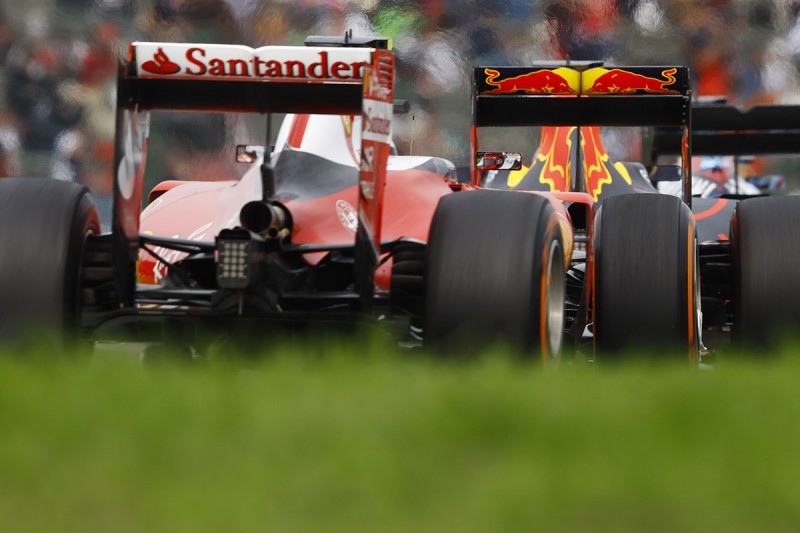 "But the end result didn't show the true pace that we had.

"We have seen from race to race it has changed a lot between the teams so where we're going to be in the next race I don't know.

"My feeling was good, everything worked well and the car was handling well here and hopefully it's the same case in the next race."

Ferrari tried a host of new aerodynamic parts in Japan, including complex turning vanes and an under-nose bat wing, after an initial test in Malaysia and Raikkonen believes they made a "small difference".

"We used them a bit in the last race and we decided to use them here to compare," he said.

"The pace was good all weekend and we wouldn't put any parts on the car if we didn't think it was beneficial.

"It's not night and day difference, it's a small difference here and there.

"I wouldn't say this is why we were suddenly more competitive here than last race because I don't know what the reason but all of those things are helping."

How Rosberg put Hamilton on the ropes