Fernando Alonso insisted the McLaren-Honda was "very, very competitive" in Canadian Grand Prix qualifying as he returned to Formula 1 for Montreal

Alonso's reacclimatisation after his Indianapolis 500 IndyCar adventure was not helped by track time lost to hydraulic problems on Friday, but he bounced back to qualify a solid 12th on Saturday - 1.2 seconds away from Lewis Hamilton's Q2 benchmark for Mercedes.

Given that he had needed to adjust to F1 again and the Montreal circuit's long straights did not favour the Honda engine, Alonso felt the result showed McLaren's chassis was in good shape.

"Obviously FP1 was not ideal," he said.

"The first 10 laps, I felt that I had to adapt a little bit - the pedal position, the steering weight, the cornering speed - it was again a refresher.

"And then we had the failures. We entered FP2 very late, with half an hour left, so we compromised the programme a little bit there.

"But now we built the speed, and we performed quite well I think.

"I think I can extract the maximum from the car on every lap.

"Qualifying in Barcelona was good but it was a less power-affected circuit. Thanks to that we were seventh.

"Here the laps were also very good, we were 12th, but we know from our estimations how much we lose on the straights

"Being that distance from the Q2 best time, we were very, very competitive today." 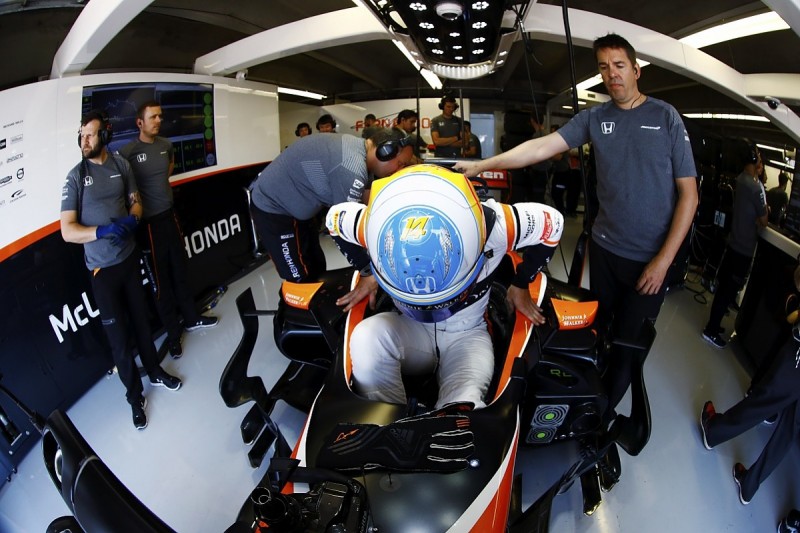 Asked how quick the car would be with a different engine, Alonso hedged his bets.

"A very difficult question to answer, because I don't want to be in the headlines tomorrow saying anything that I don't know for sure," Alonso replied.

"As I said, we know our estimations, what we are losing on the straights. So we were very competitive."

He said he enjoyed being back in the McLaren, especially in qualifying, putting some of his strong performances this year down to the car suiting him particularly well.

"We know our weakness, we know our deficit in terms of power," Alonso said,

"But this year's car, as I said in the winter, I felt it's very good for my driving style as well.

"I'm able to push the car to the limits in every qualifying and race this year.

"In that part I'm very happy, and I'm enjoying the laps.

"Obviously when you cross the line you are missing a couple of km/h on the straight, but the rest of the lap is quite fun to drive."