The world champion used medium tyres to demote McLaren's Stoffel Vandoorne from the top of the order, the Belgian having set the pace with a sequence of runs on hypersofts shortly after the track dried around lunchtime.

Hamilton had briefly moved ahead of Vandoorne earlier in the afternoon, but he had that lap taken away just before 4pm for missing the final chicane and finally took over at the head of the order 45 minutes later.

Vandoorne's time on the softest tyre, set following a flurry of activity as everybody switched to slicks, was good enough to hold on for second on the day, half a second down on Hamilton.

Sebastian Vettel was third fastest with a lap on soft tyres - the compound he used for most of the dry running - while Kevin Magnussen put Haas fourth with a series of runs on the supersoft tyre.

After completing 110 laps Vandoorne handed over the McLaren to Fernando Alonso for the final few hours, and the Spaniard added another 51 laps to the 62 he had completed prior to the final day and rounded out the top five.

In total 15 of F1's 20 drivers were in action at some point during the day, with Renault, Williams, Mercedes and Sauber all joining McLaren in giving track time to both of their drivers.

That was because the weather was much improved, despite a wet start. Temperatures were much higher - around 13-15C for most of the day - allowing teams to begin the process of making up for the time lost to the cold weather on the first three days of this test. 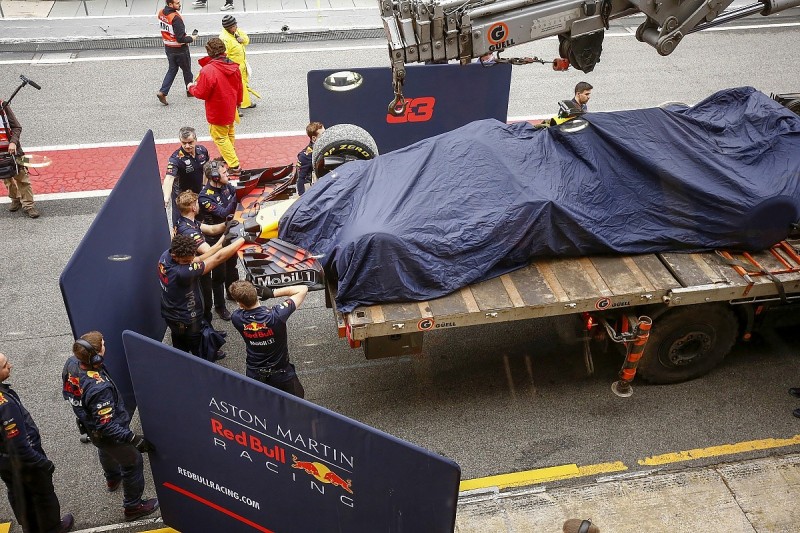 One team not able to add significant mileage was Red Bull. Max Verstappen spent most of the morning in the garage, only completing his first timed lap of the day after 12.30pm.

He completed 35 laps, mostly on the medium tyre, and shortly after switching to the soft compound and setting two personal best sectors, he brought out the red flags with a trip into the gravel at Turn 12.

The car was returned to the Red Bull garage, with mechanics carefully trying to hide its floor from the view of cameras, but Verstappen did not return to action before the chequered flag and ended the day ninth quickest.

Williams's timing of its driver change meant Sergey Sirotkin was the only driver not to set a time on slick tyres, leaving him adrift at the bottom of the order behind the two Saubers.

F1 teams now have a four-day break from track action before the final pre-season test starts at the same venue on Tuesday.