Toro Rosso topped another session of Formula 1 testing at Barcelona with Alexander Albon fastest before lunch on day four, while Mercedes showed some speed for the first time

Albon went fastest half an hour before the lunchbreak, using the softest compound C5 tyres just as team-mate Daniil Kvyat did to go fastest on Wednesday afternoon.

That moved him ahead of Daniel Ricciardo, who went fastest initially using the C4 compound, before setting an even quicker time using the C5s just after midday.

Before Ricciardo went top, Lewis Hamilton was the pacesetter as Mercedes made good on its promise yesterday to "focus a little bit more on performance" on the final day of the first test.

Hamilton first showed signs of some pace with the W10 early in the second hour, when he traded times at the top briefly with the Ferrari of Charles Leclerc as both used the C2 tyres.

The world champion then set two fastest sectors on the C3 tyres half an hour later, before he encountered Robert Kubica's slow Williams in the final chicane and had to take to the old penultimate corner to avoid a collision.

Thanks to cutting the track Hamilton did still make a slight improvement, which he bettered by another tenth of a second with a clean second attempt. He then went fastest for the first time during this test with a run on the C4 tyres shortly after 11am.

Half an hour later he was back on track with the C4 tyres again, setting Mercedes' first sub-1m18s lap of the week with a 1m17.9s. However, moments later Ricciardo came through with a time fractionally faster.

Hamilton did try the C5 tyre before lunch, but his times were not especially quick, suggesting Mercedes switched back to running with a higher fuel load with the softest compound.

Leclerc made a slight improvement on the C3 tyres just before midday that did not change his position, and it was shortly after that that Albon started a series of quick runs in the Toro Rosso.

He initially climbed into the top three with a couple of short runs on the C4 tyre, before moving to the top with his effort on the C5s.

Ferrari customer teams Alfa Romeo and Haas completed the top six with Antonio Giovinazzi and Romain Grosjean, while Pierre Gasly was seventh for Red Bull, which spent the morning focusing on runs with the C3 tyre and did not appear to chase performance. 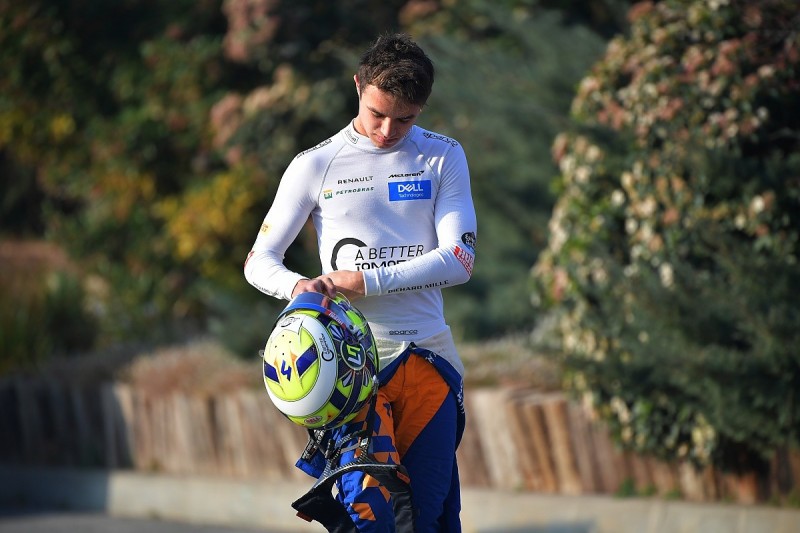 Lando Norris was eighth, having brought out the only red flag of the morning when he lost control at low speed in Turn 5 during the first hour when the air temperature was just 3C.

The McLaren was touring very slowly around the circuit at that point, then had a wobble as Norris got on the throttle, and in correcting the slide he went straight-on into the gravel trap, getting beached before he reached the tyre wall.

Kubica's Williams brought up the rear of the field behind Lance Stroll's Racing Point, and after starting the morning performing low-speed aero checks, Williams managed to get down to some proper running as the day progressed.

Kubica had a spin exiting the final chicane mid-session, and by lunchtime he had logged 48 laps with a best time of 1m21.542s on the C2 tyre.

Claire Williams: F1 team is not in 'crisis' after testing delays