Following its unexpected victory in the opening race of the 2018 Formula 1 season, Ferrari brought aerodynamic updates to its car for Bahrain to make it more of a match for Mercedes

Heading to Australia, the team had lingering doubts leftover from pre-season testing and so decided to use some of its free practice time doing back-to-back tests with its new for 2018 front wing design and a wing very similar to the 2017 specification.

The main differentiators were the way the main cascade connected to the 'r' shaped cascade for support, rather than touching down on the main plane, the shape of the outer footplate, the main plane arc and finally the innermost connecting point with the neutral section.

The doubts Ferrari had about the two differing wing specifications appear to have been put to one side in Bahrain, as the team set about clipping the front wing flaps to suit the downforce levels required for the Sakhir circuit. 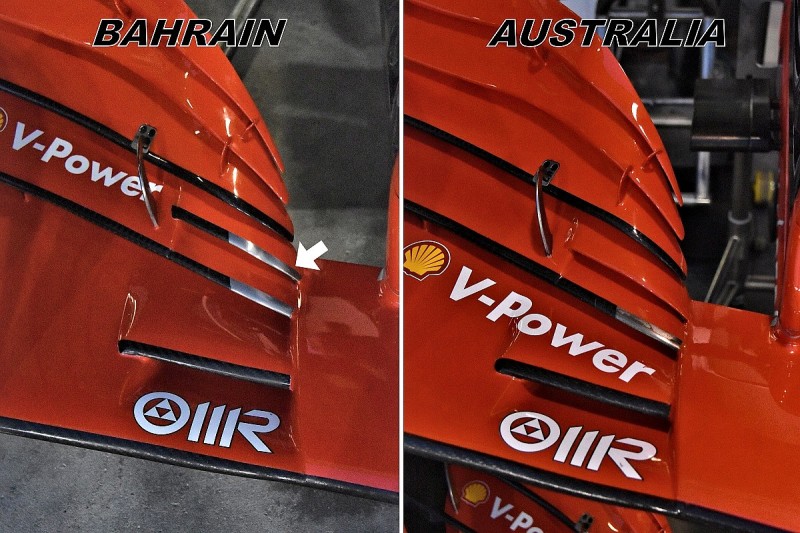 The team also improved the rigidity of the second flapped element sprouting from the main plane (white arrow), as it installed another metal strip.

This meant that as the load builds on the wing, the lower main plane elements don't rotate as freely as the upper ones, reducing some of the aerodynamic instability that was previously occurring when entering the braking zone.

Sebastian Vettel had talked in Australia about lacking confidence in the front end of the car, and this feeling could have been related to the wing issue. 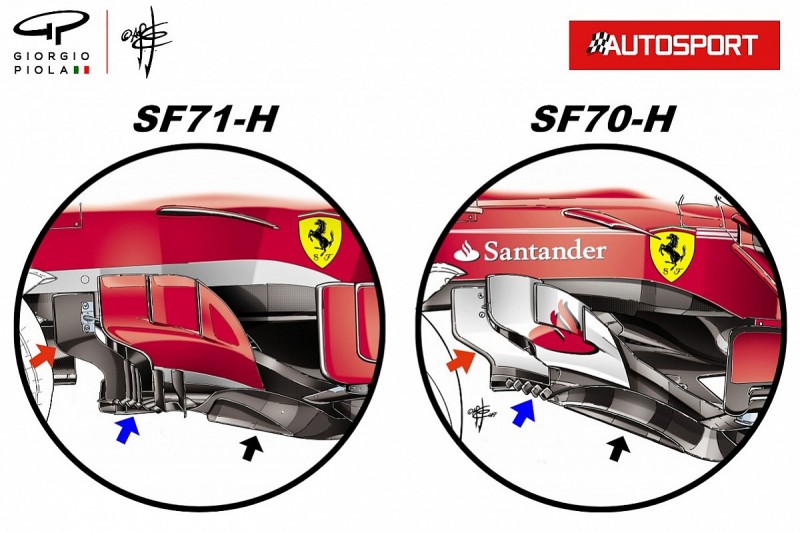 The region between the front wheels, sidepods and the floor's leading edge is considered the area to offer the most low-hanging fruit for downforce since the change of regulations from 2017.

The SF71H, being an evolution of its predecessor, is similar in many ways but an increase in wheelbase has unlocked further avenues of development in this region of the car.

In the above comparison between the SF71H and the update run from Malaysia onwards on the SF70H last season, we can see how the team has optimised its setup.

The forward element (red arrow) introduced as part of that update has been retained. However its geometry has been altered to suit the new dimensions that are available.

Behind this, the row of mini-winglets (blue arrow) have been stretched out giving them more influence over the airflow that passes around them.

As part of this alteration, the designers have taken a design cue from Mercedes and installed vertical fences upon them too, maximising how the airflow moves around this area in yaw. The lower scythe shaped elements (black arrow) have also been revised as part of the team's overall revamp. 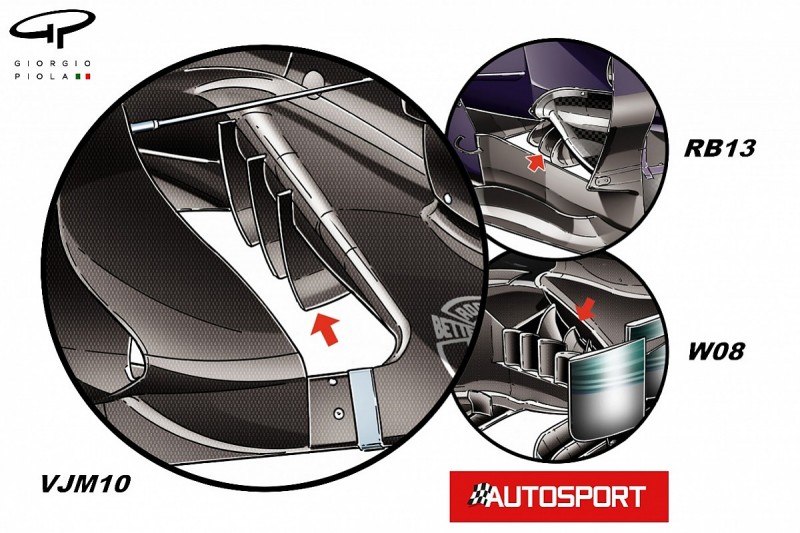 Also noteworthy but not seen in these illustrations is that Ferrari has installed the three strakes on the leading edge of the floor that were first seen on the Mercedes W08 (bottom right) and subsequently run by Red Bull (top right) as part of its update in Hungary last season.

Force India also tested them in Mexico last season (left) and have since added them to this year's car.

These strakes help to stabilise the turbulent airflow the floor receives, improving flow stability to the diffuser.

The drivers reportedly had balance and stability issues in Australia, an issue that the team believed was in part due to its new for 2018 diffuser design.

Whilst a full-blown solution will not be available until China, the team made some minor alterations to the central portion for Bahrain.

During pre-season testing, the bargeboard area on the Ferrari looked fairly basic when you compared it to the Mercedes, but small developments have been introduced, most recently in Bahrain, increasing the complexity and performance of this very influential area.

The bargeboards basically help everything else aerodynamic to work; the front wing, cooling, underfloor, diffuser and Coke bottle area would all suffer if these components weren't working properly, so it is a huge area of development.

The front area, with the three vertical red vanes and the components below them, combine to help pull airflow out from underneath the raised front of the chassis.

This, in turn, reduces the blockage behind the front wing to improve its performance. The lower area helps prepare the airflow for the leading edge of the underfloor.

This is a very complex area as it works like a small diffuser, improving the performance of the front of the underfloor in the area just below the Ferrari logo.

The vertical vanes on the outer corners of the sidepods are there to reduce the negative effect the turbulent area behind the front tyre would normally have on the underfloor and undercut sidepods. All this adds up to better underfloor performance. 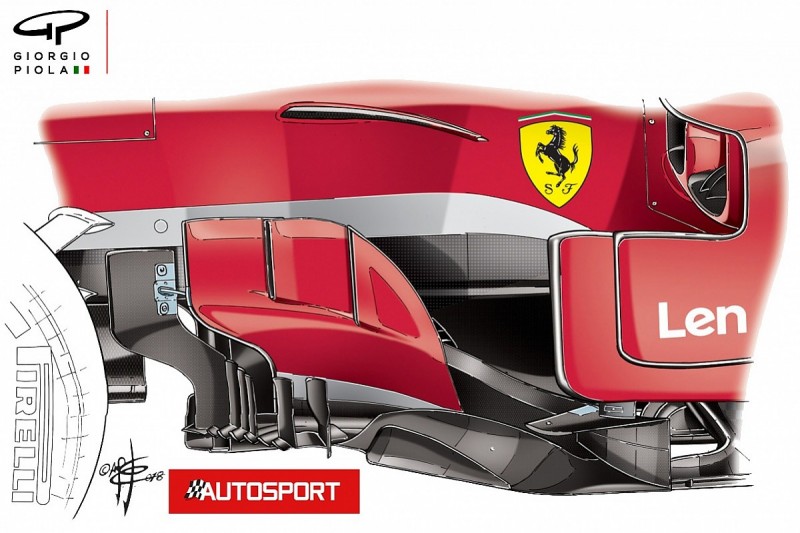 Why Red Bull must gamble on Honda