There were four virtual safety car periods across an event where Hamilton and Verstappen went wheel-to-wheel three times at the first corner – with Verstappen twice being ordered to hand a position back his title rival after completing moves off track.

When he slowed to allow Hamilton by for the latest controversy at that turn, they crashed into each other as Verstappen tried to let Hamilton by on the approach to the final corner in an incident that is being investigated now the brutal contest has ended.

At the first start, Hamilton and Bottas leapt off the line in unison, with Bottas holding his line on the inside run to the first corner to guard against a Verstappen dive, with the Dutchman slotting in behind them in the same third place as he started.

The biggest danger for Verstappen came from team-mate Sergio Perez getting very close to his left-rear as the Mexican driver locked up trying to dive by Charles Leclerc’s Ferrari on the outside line.

The move got Perez fractionally ahead of Leclerc but it cost him momentum going around the long right-hander of Turn 2 and the Ferrari was able to pull back ahead and set off after the leaders.

The top three were able to lap in the low 1m34s in the early laps, with Leclerc and those behind in the 1m35s and slower, which meant there was quickly a gap behind Verstappen. 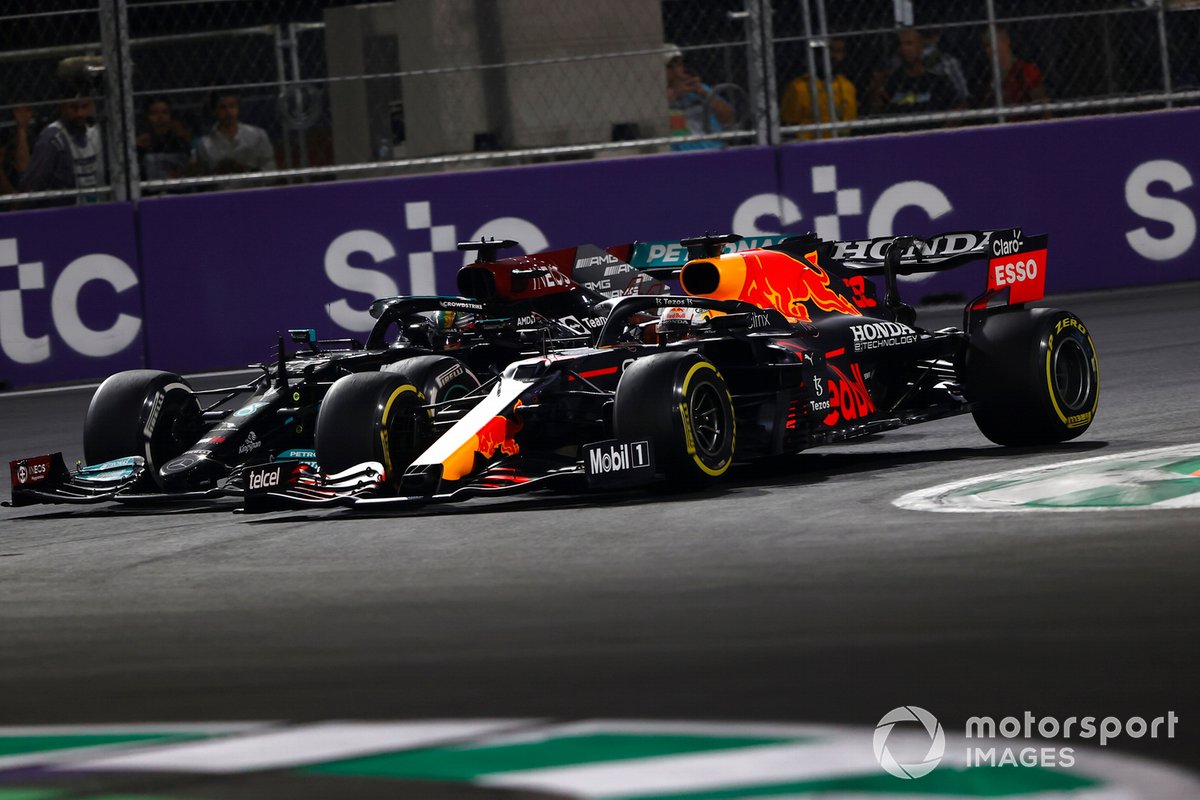 As Bottas was able to hold the Red Bull at just over a second as the leaders increased their pace into the 1m33s as the first 10 laps of 50 came to an end, Hamilton was instructed to create a gap to his team-mate to avoid the Finn running in too much dirty air and damaging his tyres.

Hamilton’s lead over Bottas had just reached 2.0s – and 3.4s over Verstappen – when the race was interrupted by a safety car period activated after Mick Schumacher lost the rear of his Haas running through the fast left-hand kink of Turn 22 (where Leclerc crashed in FP3 in a very similar incident) on lap 10.

Mercedes called Hamilton in to switch from the mediums to the hards, with Bottas doing likewise, but only after he’d dropped to seven seconds behind the leader, which enraged Verstappen and Red Bull.

Verstappen then did not follow the Mercedes cars into the pits and therefore headed the queue in front of Hamilton, Bottas and fellow non-stoppers Esteban Ocon and Daniel Ricciardo, who was the lead runner to have started on the hards.

But after four laps behind the safety car the race was red flagged, which gave Red Bull the chance to change Verstappen’s tyres to the hards and not lose position, which enraged Hamilton, who repeatedly question the need to stop the race before he climbed out his car in the pitlane.

After a near 20-minute stoppage, the race resumed with a second grid start – after Hamilton had complained about Verstappen appearing to do a practice start as he left the pitlane and Verstappen was livid with Hamilton dropping so far behind on the approach to the grid.

At the second start, Hamilton rocketed alongside and past Verstappen immediately, but the Red Bull shot back to the Mercedes’ outside as they braked and turned in for Turn 1, then cut Turn 2 to get back ahead of Hamilton as they both moved wide. 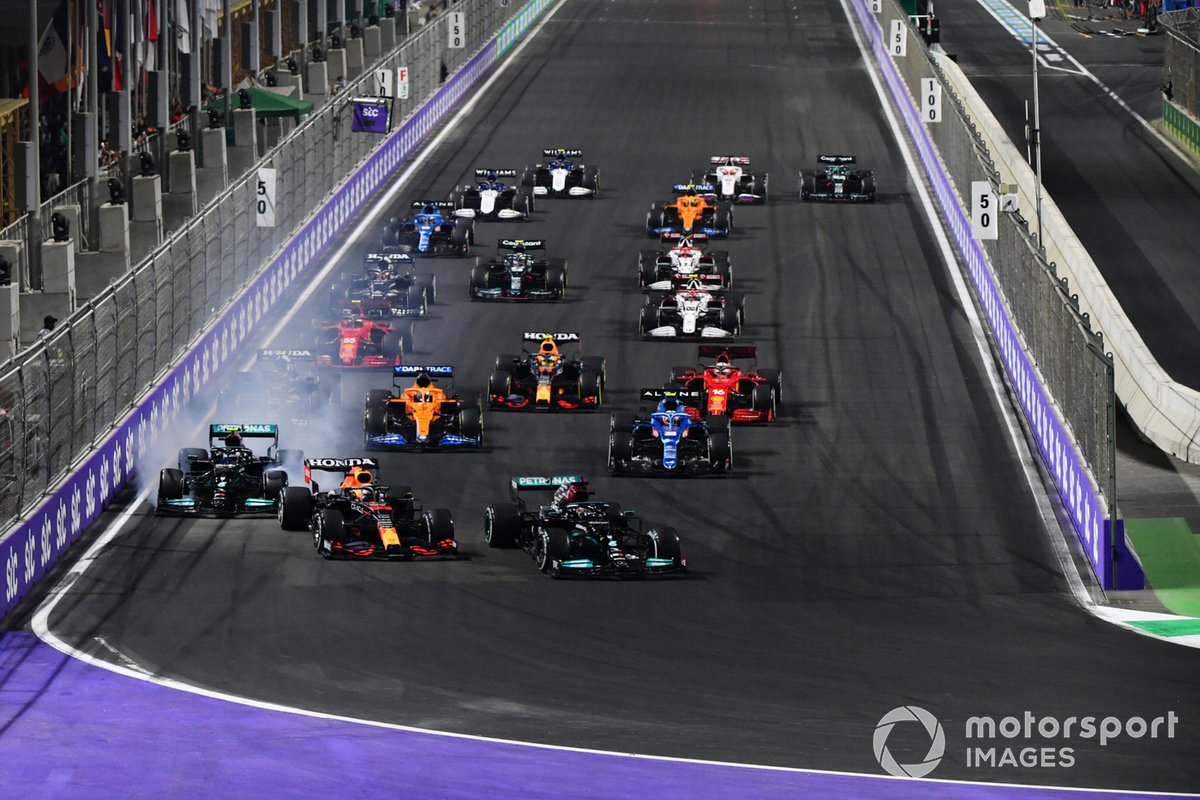 With Hamilton losing momentum moving back left as Verstappen rejoined ahead, Ocon nipped by to run second as he had passed Bottas when the Finn locked up at the first corner.

In the pack behind, Leclerc spun Perez into the wall as they ran side-by-side on the exit of Turn 2, with the Red Bull having been just ahead as they race around the ensuing Turn 3 right, and that set off a chain reaction that led to Nikita Mazepin rear-ending George Russell – unsighted as the Williams and others braked ahead.

Perez, Mazepin and Russell were out immediately, with the race red flagged again for 20 minutes as the wreckage was cleared.

During the stoppage, Red Bull and Mercedes had a series of radio calls with race director Michael Masi, who suggested Verstappen accept being moved behind Ocon and Hamilton for the third standing start or he would refer the Turn 1 incident the stewards.

Red Bull accepted the decision and so the grid formed up again, with the top three split on tyre strategy – Ocon and Hamilton still on the hards and Verstappen back to the mediums, as was Ricciardo and Bottas behind him.

When the lights went out for a third time, latest polesitter Ocon found Hamilton immediately alongside him as the raced away from the front row, but Verstappen swerved from the outside line to cut off Ricciardo and then dive down the inside of both leaders at Turn 1.

Hamilton touched Ocon after a brief jink right as Verstappen shot down his inside, with the Alpine cutting Turn 2 after going deep at Turn 1 following the light touch with the Mercedes and Ocon rejoined in front of Verstappen before swiftly handing first place to the Red Bull. 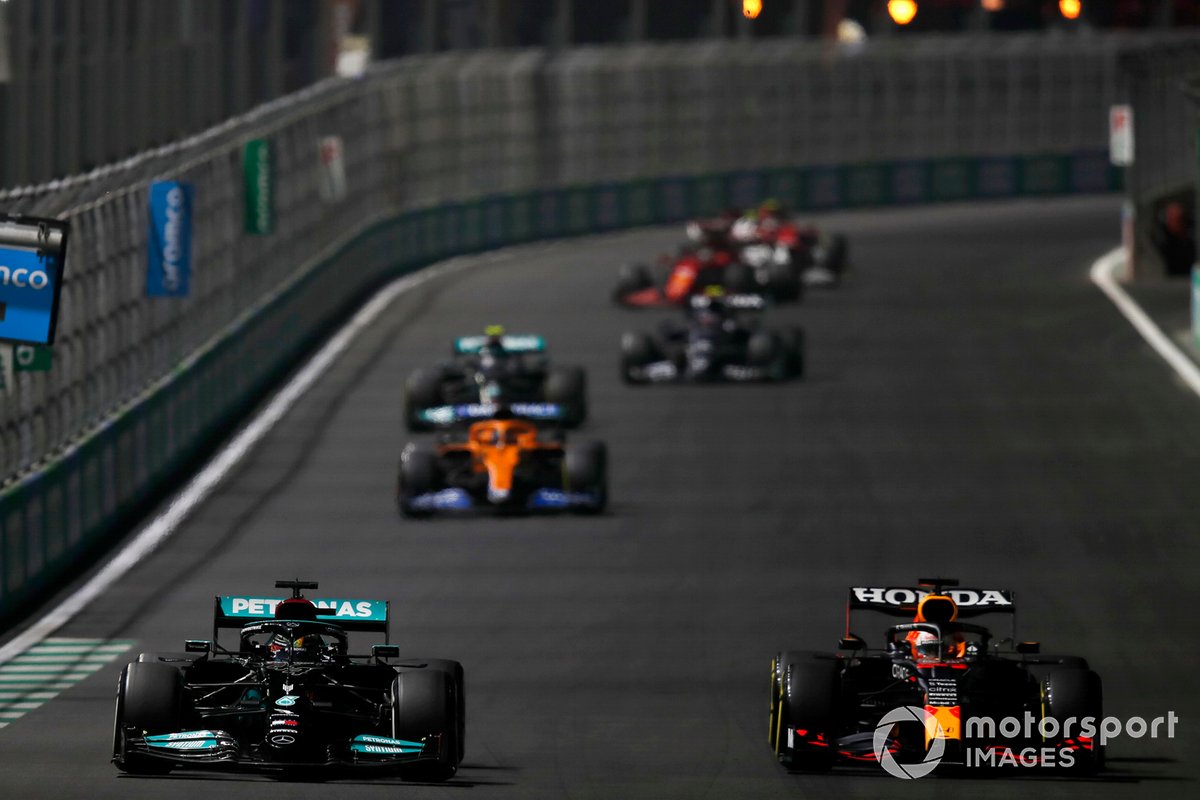 Verstappen opened up a 1.3s lead by the end of lap 17, the third restart lap, with Hamilton then breezing by Ocon on the approach to Turn 1 at the start of the following tour.

That set up the latest duel between the two title rivals at the head of the pack, as they quickly pulled clear of Ocon, who was five seconds adrift by the start of lap 20, swapping fastest laps as the only drivers able to lap in the 1m32s bracket.

On lap 23 the race was interrupted again – this time because of a virtual safety car activated after Yuki Tsunoda and Sebastian Vettel getting together at Turn 2 and the AlphaTauri’s front wing needing to be recovered from the runoff.

The suspension was short and at the very end of the following lap the race went green again and Hamilton’s chase of Verstappen resumed – their pace immediately reaching the 1m31s.

But second and third VSC activations were needed so more debris could be cleared in the tours approach the lap 30 mark – following Vettel having a clash with Kimi Raikkonen at Turn 4 after his clash with Tsunoda, for which the AlphaTauri driver was given a five-second time addition penalty, had dropped him down the order.

The third VSC was much longer than the second and lasted from lap 29 to a few corners into lap 33, at the end of which Verstappen had a 1.2s lead, but the full speed conditions lasted just three further tours as another piece of debris needed to be recovered under a fourth VSC from the entry to Turn 14.

But that interruption lasted just a few seconds, with then Hamilton getting a close run behind Verstappen at the start of lap 37 – passing the Red Bull with DRS on the outside run to Turn 1. 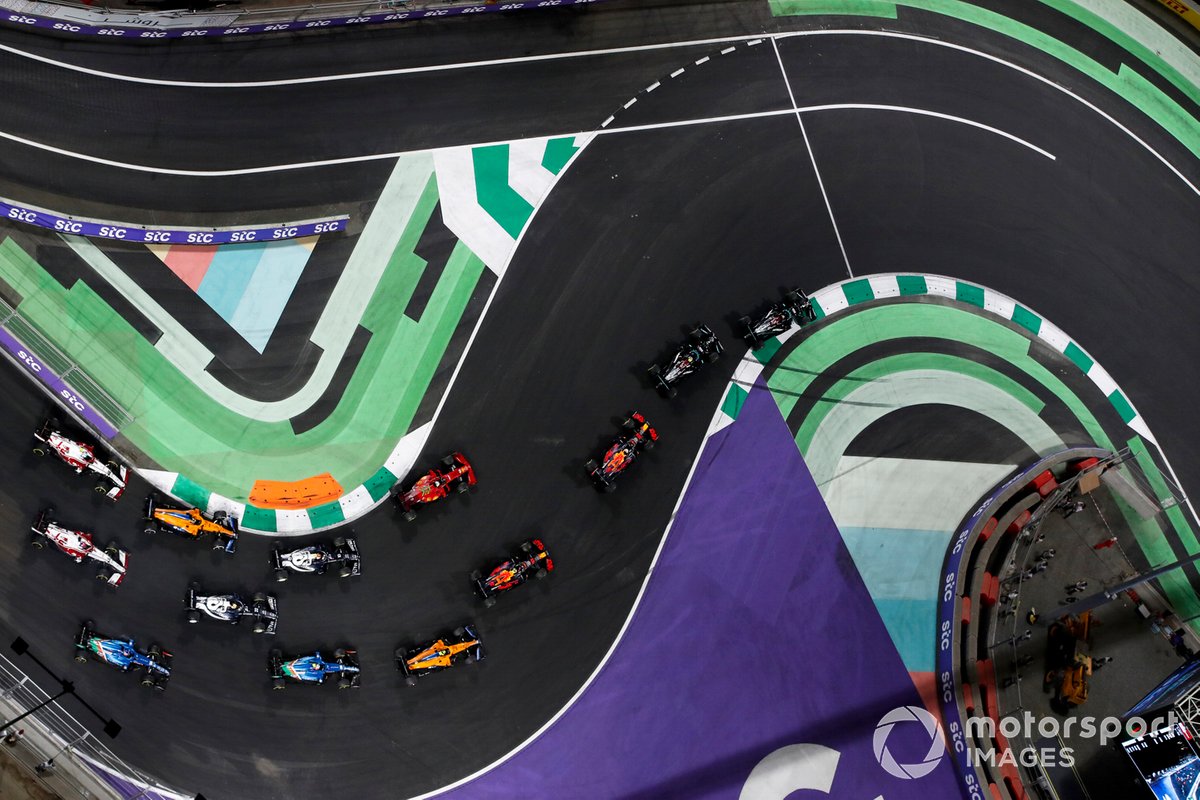 But Verstappen again stayed on the inside and both went deep, much like at Turn 4 at Interlagos, with the Red Bull then sliding wide and cutting Turn 2 and staying ahead as both went off the track.

Red Bull instructed Verstappen to let Hamilton by later on lap 37 and he slowed on the approach to the final corner – where the Mercedes went into the back of the Red Bull in confusing scenes for both, which ripped off the right-side of his front wing. Verstappen was given a 10-second penalty for the incident post-race.

After a few laps with Verstappen still ahead, during which Mercedes and Masi argued over what had happened on the run to Turn 27, the Red Bull driver again slowed to let Hamilton by at the same corner – but this time, once the Mercedes was through, Verstappen nipped back ahead to retake the lead as they rounded the left-hand hairpin.

In the aftermath of that incident as lap 43 began, Verstappen was handed a five-second time addition penalty and he then appeared to slow again to let by Hamilton at the final corner.

This time, Verstappen attacked back on the outside, with Hamilton getting a warning for edging him into the runoff as the Briton stayed ahead.

Hamilton moved clear from there as Verstappen’s mediums began to give up and he backed off to make the finish, 11.8s adrift, with Hamilton having enough pace despite his damage to secure the fastest lap.

Ocon lost third to Bottas on the line as the second Mercedes used DRS to overcome the Alpine – having battled by Ricciardo a few laps earlier and started a late charge to rescue a podium.

Pierre Gasly finished sixth ahead of Ferrari pair Leclerc and Sainz – the former having lost ground after the third restart – with Antonio Giovinazzi and Lando Norris rounding out the top 10.