Aston Martin ended the Formula 1 season in a super close fight with Alfa Romeo in the constructors' championship.

But while it ultimately missed out on beating its rival on countback, even getting in that battle was impressive considering how challenging the start of its year had been.

The 2022 campaign proved to be a down-and-up season for the British marque, as it abandoned its launch sidepod concept design early on after being unable to get the performance out of it that it had hoped for.

Here we look back at its tech progress, from the AMR22 launch concept to the mid-season revamp and its later upgrades. 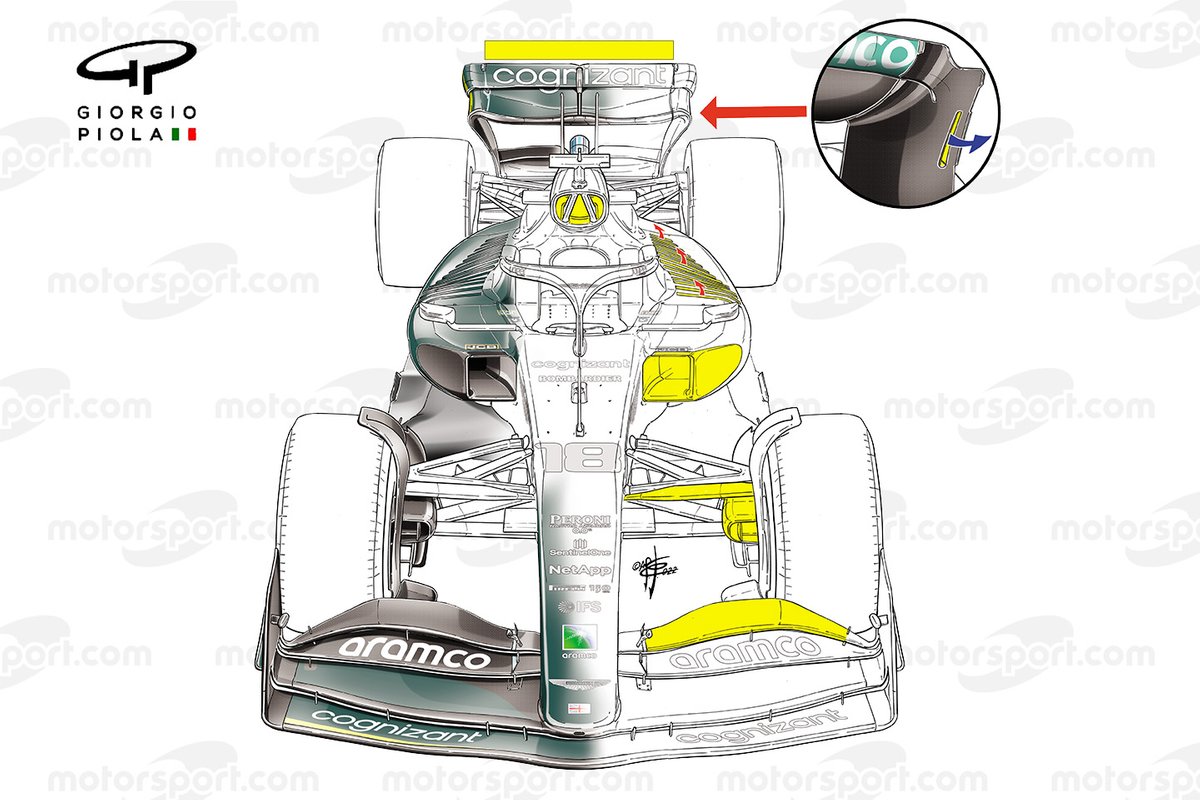 Aston Martin's first interpretation of the 2022 regulations saw the team adopt a high waisted, completely undercut sidepod solution, with a square inlet and a slew of cooling gills along the bodywork's back. 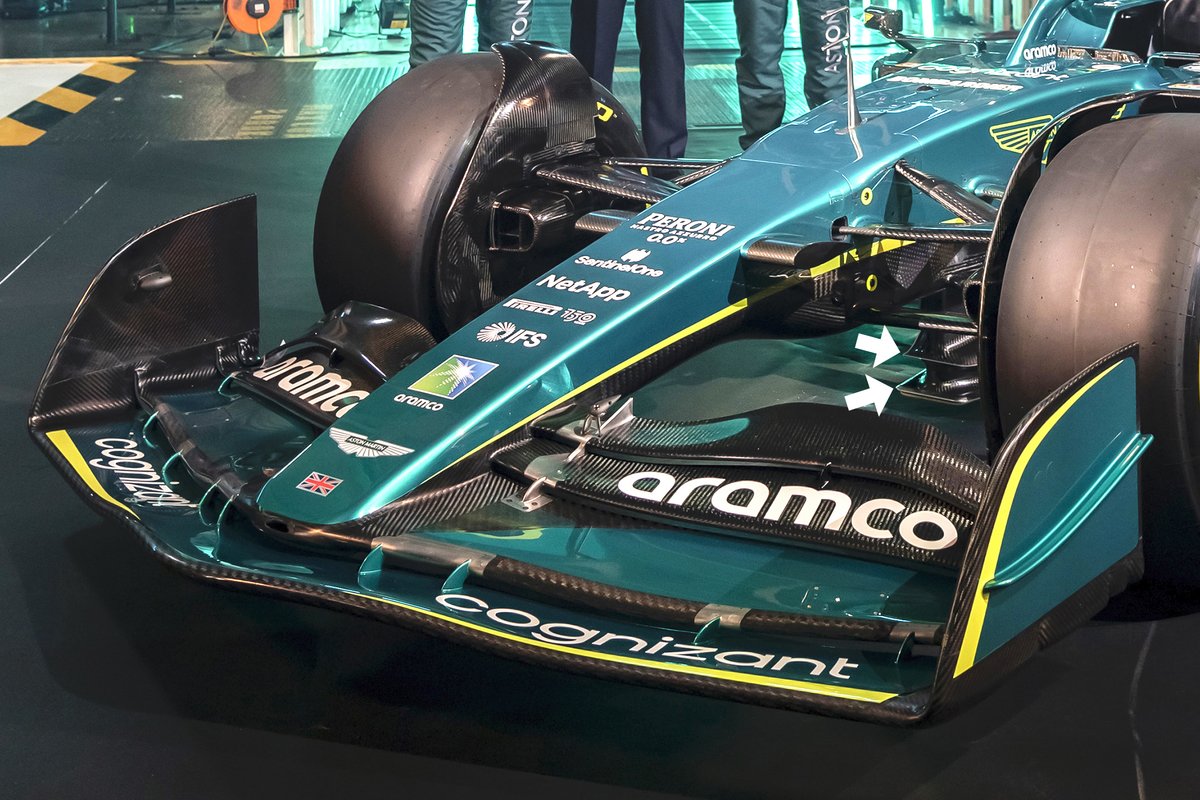 As seen in the launch images, Aston Martin was the first team to install a bib wing on its car, a solution we saw a great deal of teams adopt throughout the course of 2022. 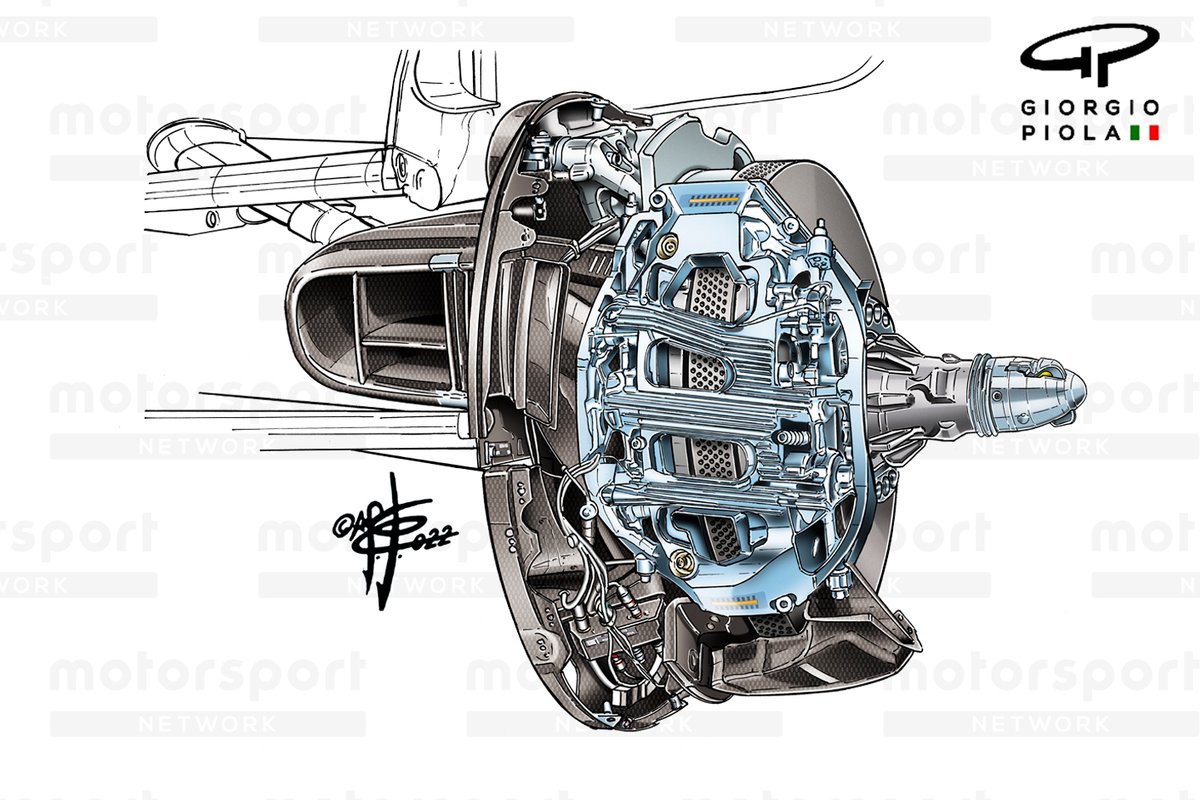 Aston Martin opted to mount its front brake caliper at the front of the assembly for 2022, with the caliper designed to allow heat rejected by the disc a pathway between it and the brake drum. 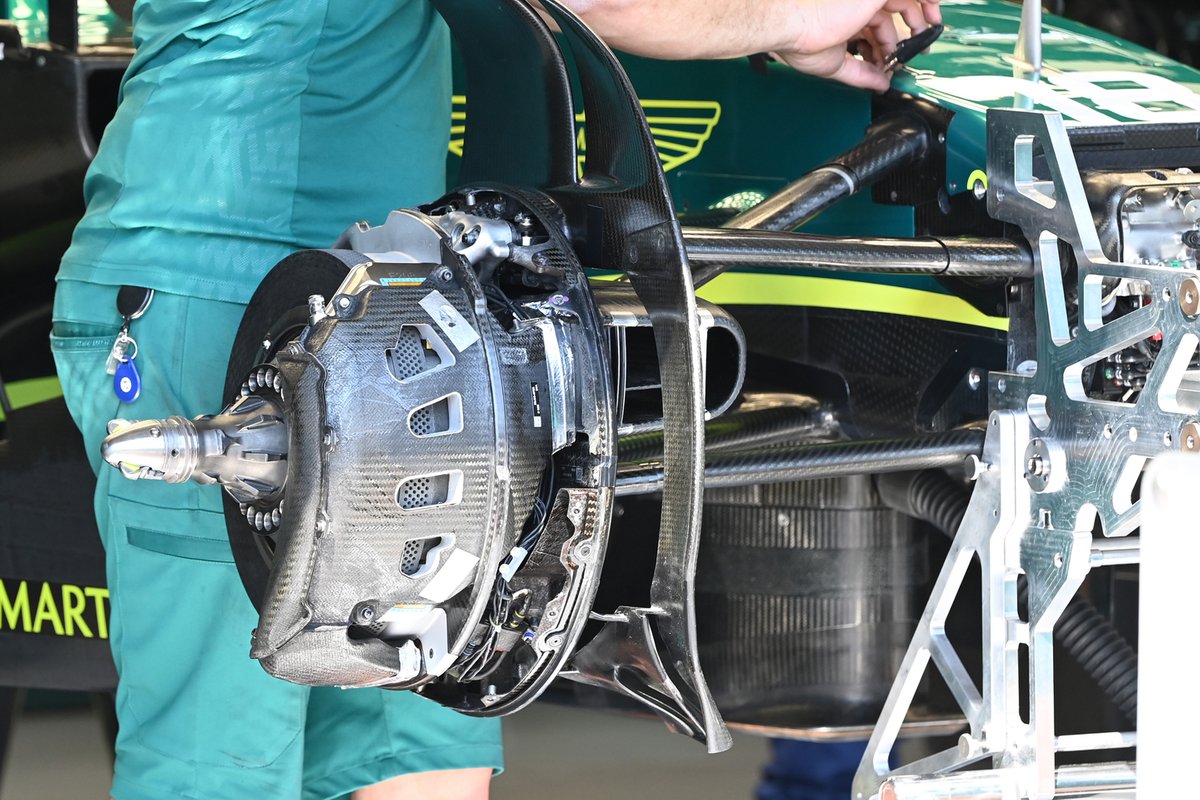 The brake caliper with the carbon shroud in place that also feeds cool air around the caliper. 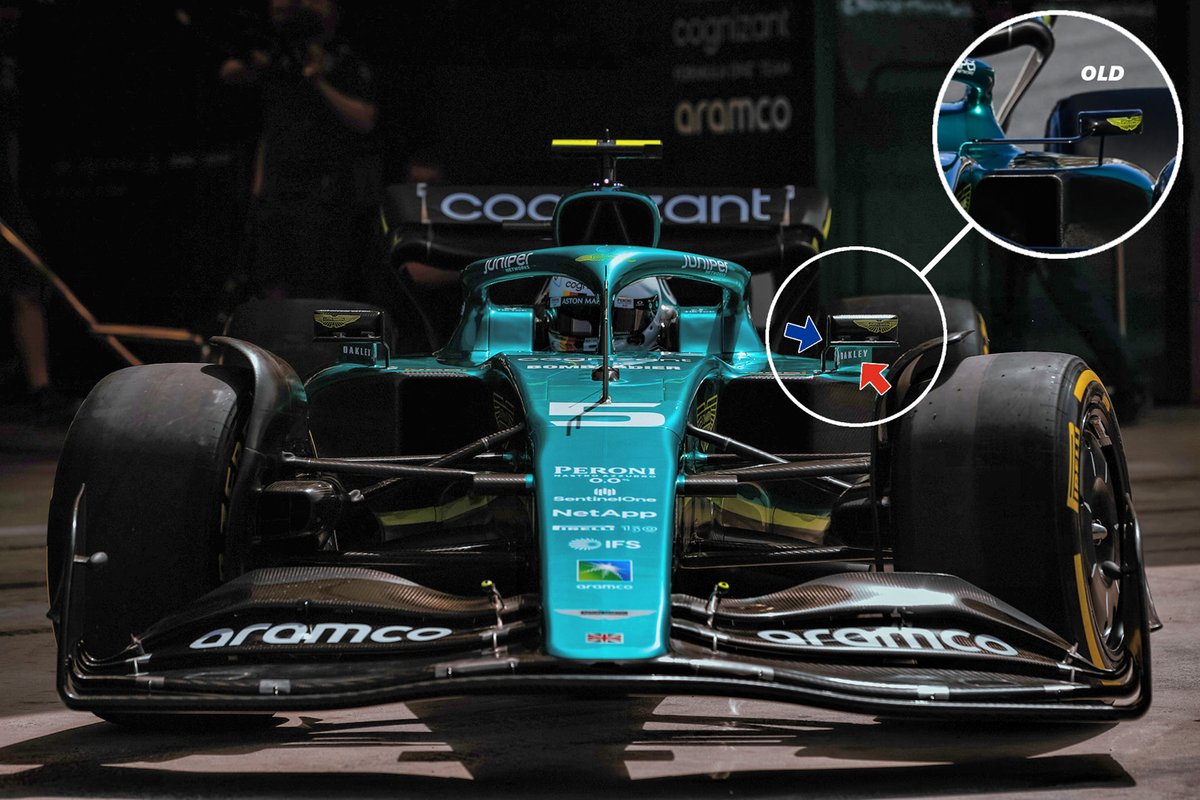 A change in the design of the mirror housing and stalks was swiftly made, as the team looked to use their presence as a way of boosting aerodynamic performance. 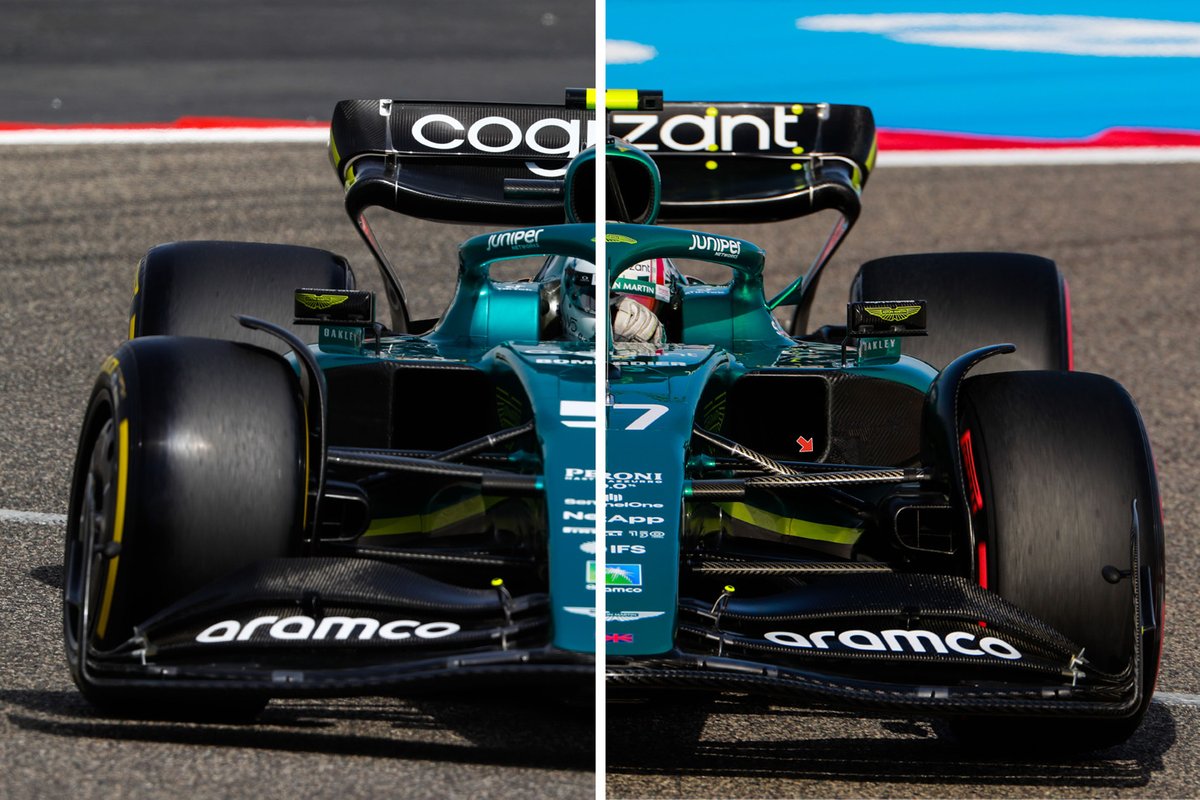 The first race of the season saw the team make modifications to the sidepods, with the squared-off lower corner of the inlet replaced with one with less radius (red arrow), which not only impacts flow into the inlet but also around the bodywork's undercut. 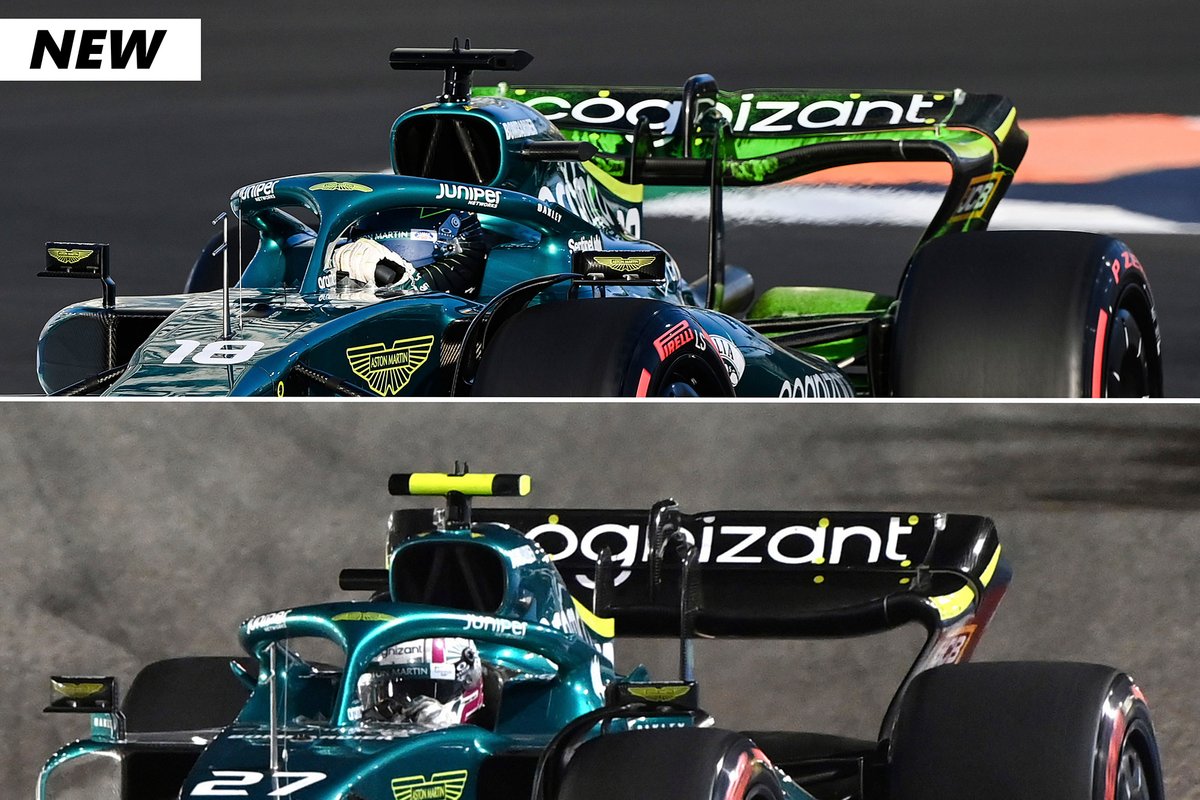 Aston Martin fitted the AMR22 with a much lower downforce rear wing for the Saudi Arabian Grand Prix, with a deeper central portion and shallow outer portion creating a more aggressive spoon-shaped design than its higher downforce counterpart. 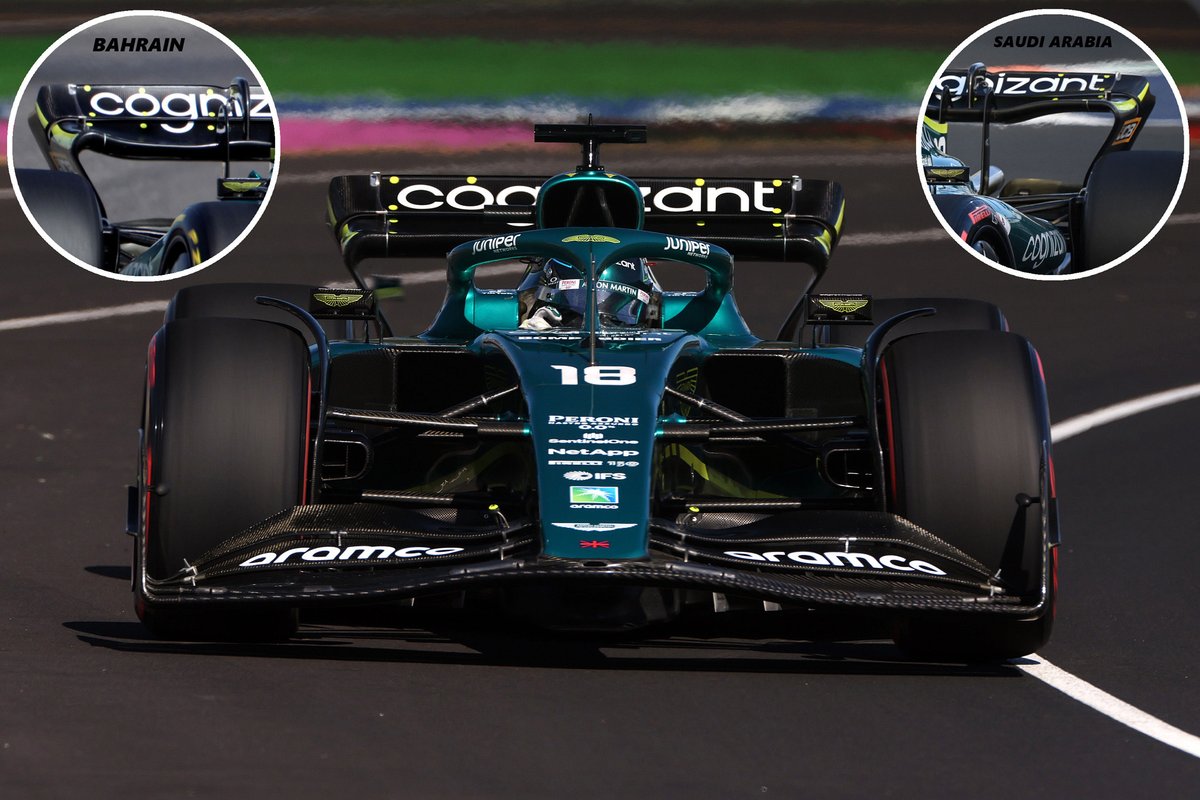 A third specification rear wing was unveiled for the Australian Grand Prix, sitting in the middle in terms of downforce levels of those already utilised. The wing was the first in its suite to feature more of a traditional mainplane, rather than the spoon-shaped ones that the new regulations are more suited for. 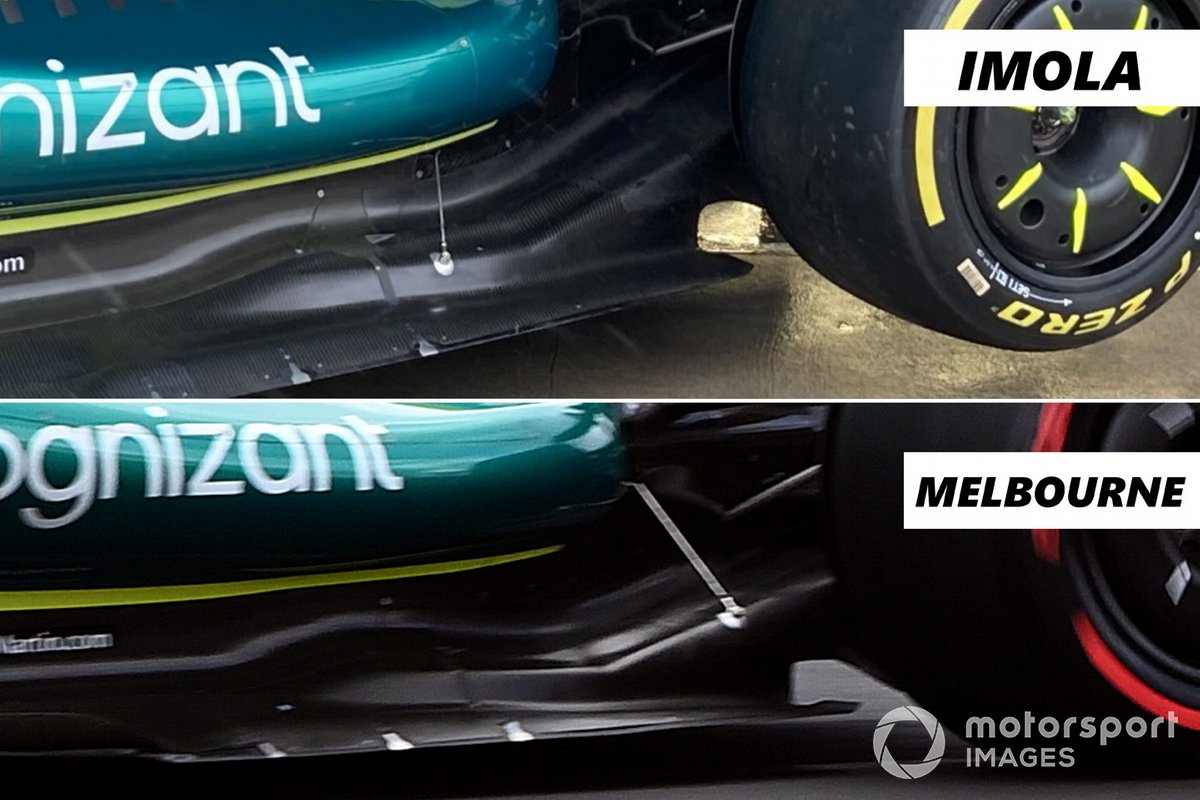 The team revised the position of its floor stay at the Emilia Romagna Grand Prix in order that it offered the correct support to the floor under flexion. 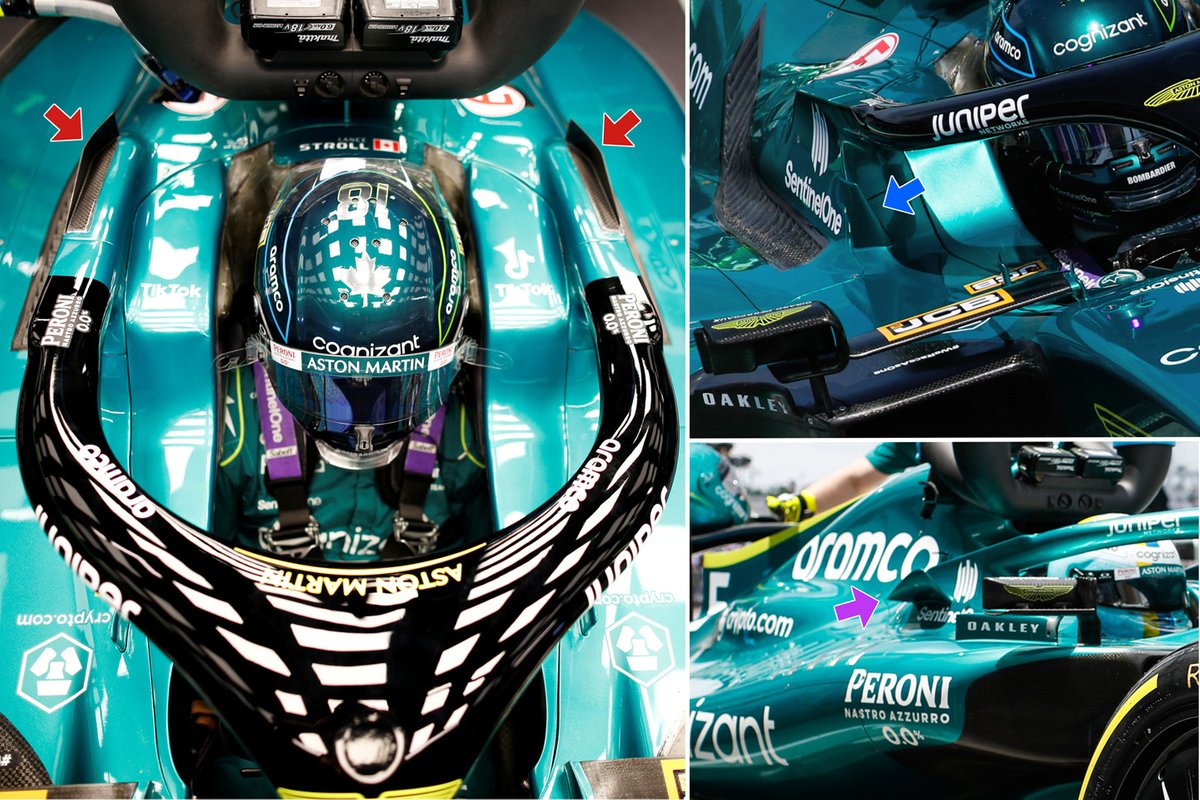 Aston Martin had a variety of different solutions when it came to the winglets mounted on or around the halo. All of these help, in various ways, to redistribute flow around the car. 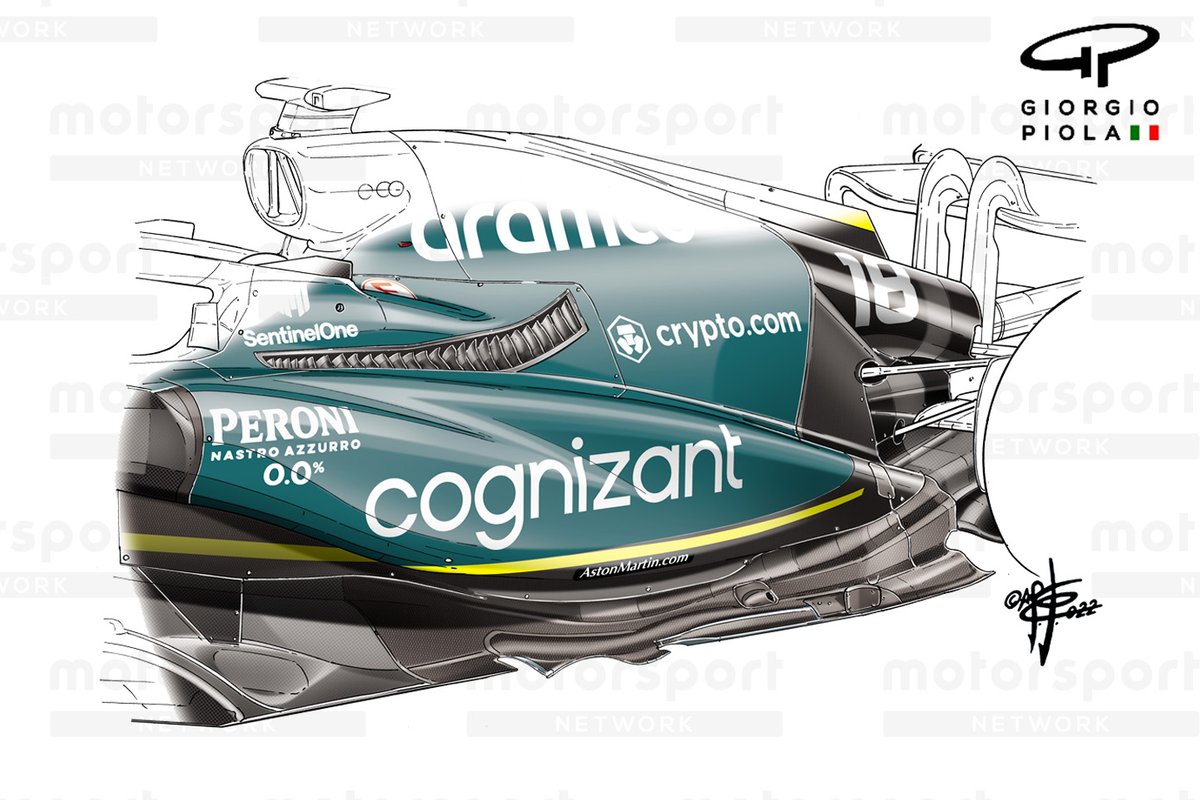 The AMR22 featured completely revamped bodywork from the Spanish Grand Prix onwards, with the team opting to follow in the footsteps of Red Bull and abandon its high-waisted sidepod solution.

The downwash ramp-style sidepod even featured the midriff sewage line and narrow, twisted cooling gill panel seen on the RB18.

However, it was either unable or unwilling to completely assimilate the design as the inlet section of the sidepod remained squared-off, rather than taking the open top form seen on its rivals' cars. 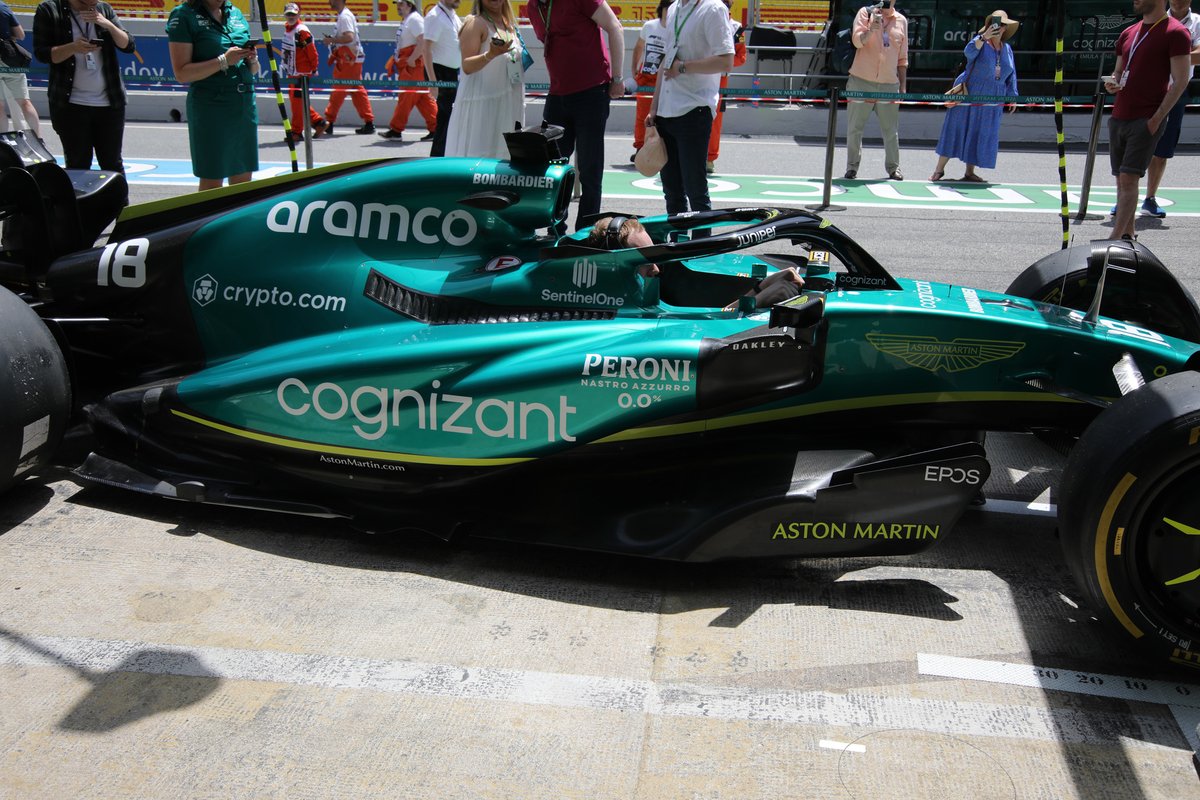 The floor was also changed as part of the Spanish Grand Prix update package. And, much like the bodywork changes, was very similar to the design seen on the Red Bull. This included the marriage of the two outer floor fences, which had only been seen on the RB18 beforehand. 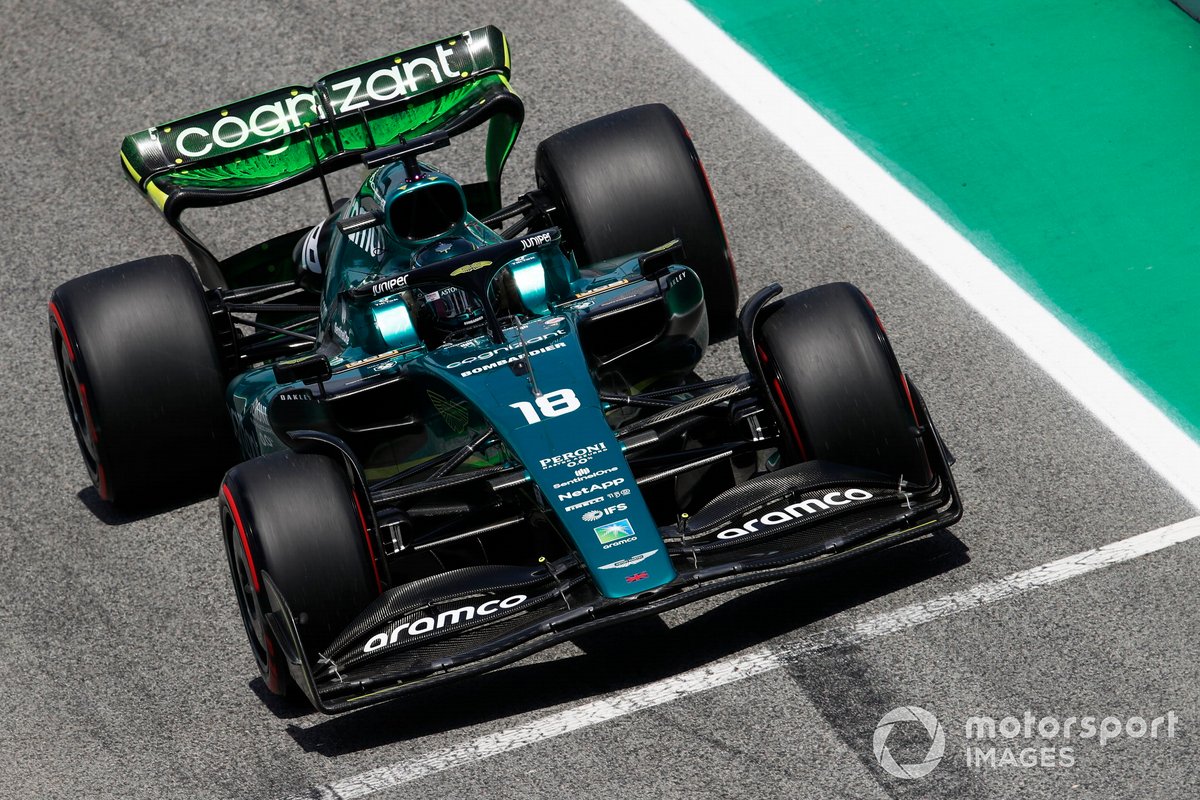 The team also ran a high downforce rear wing in Spain, which can be seen here with flo-viz applied in order that the team could get visual confirmation it was working as anticipated. 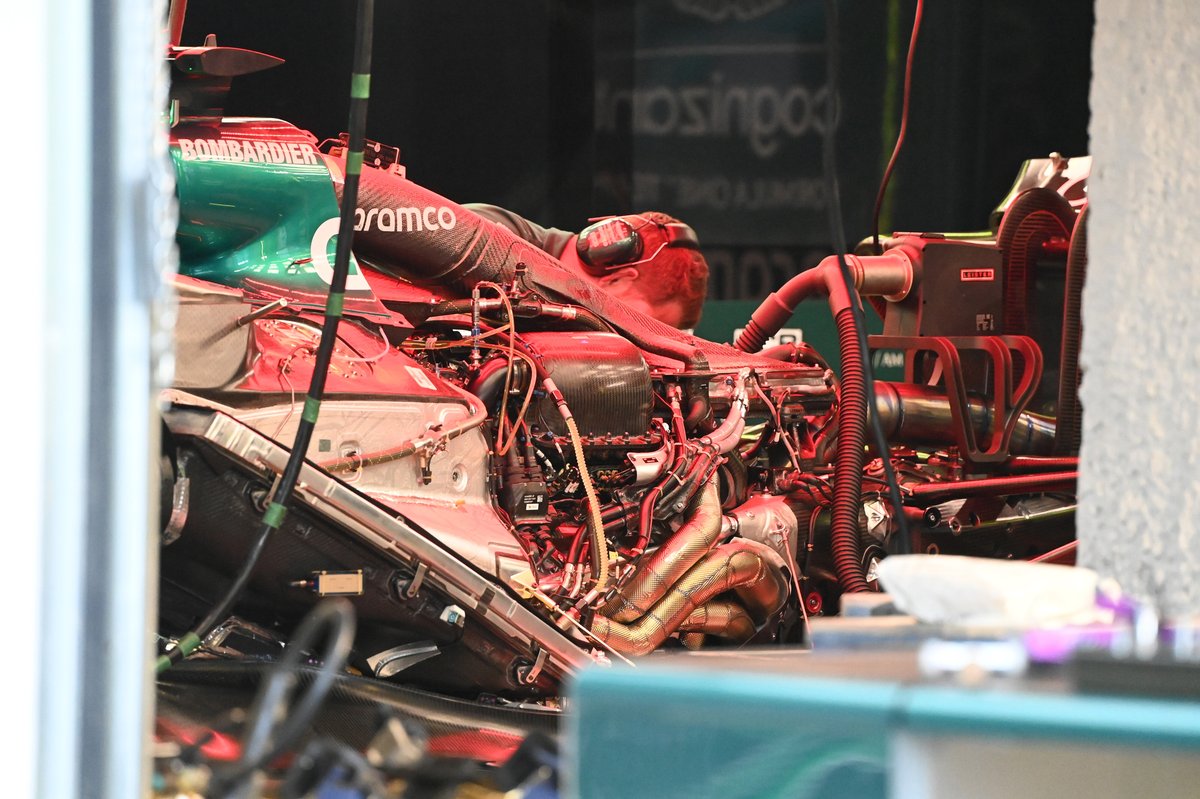 A peek under the covers at the Canadian Grand Prix allows us to appreciate the way the team packaged the power unit within, including the placement of the radiators within the sidepod and the airbox ducting. 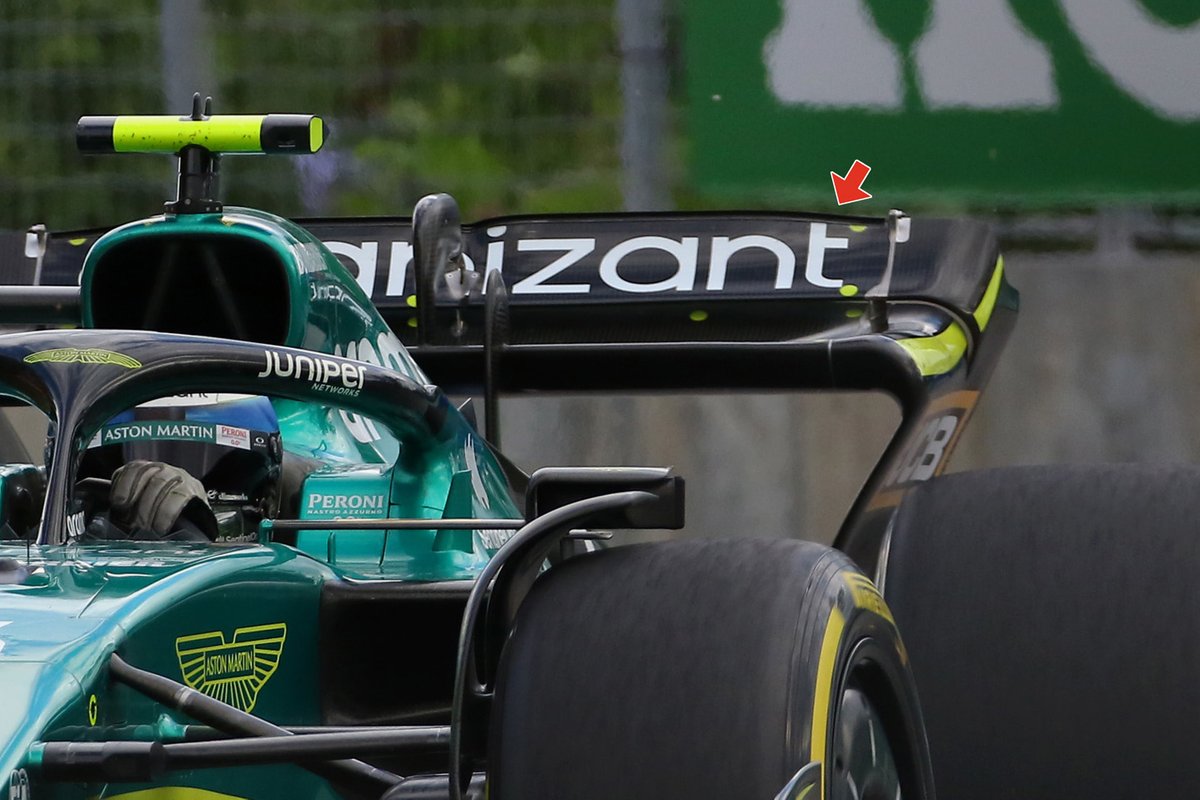 Another rear wing configuration was added to the growing number at its disposal too, as the team installed a new upper flap with a central section that was slightly taller than the tip section. 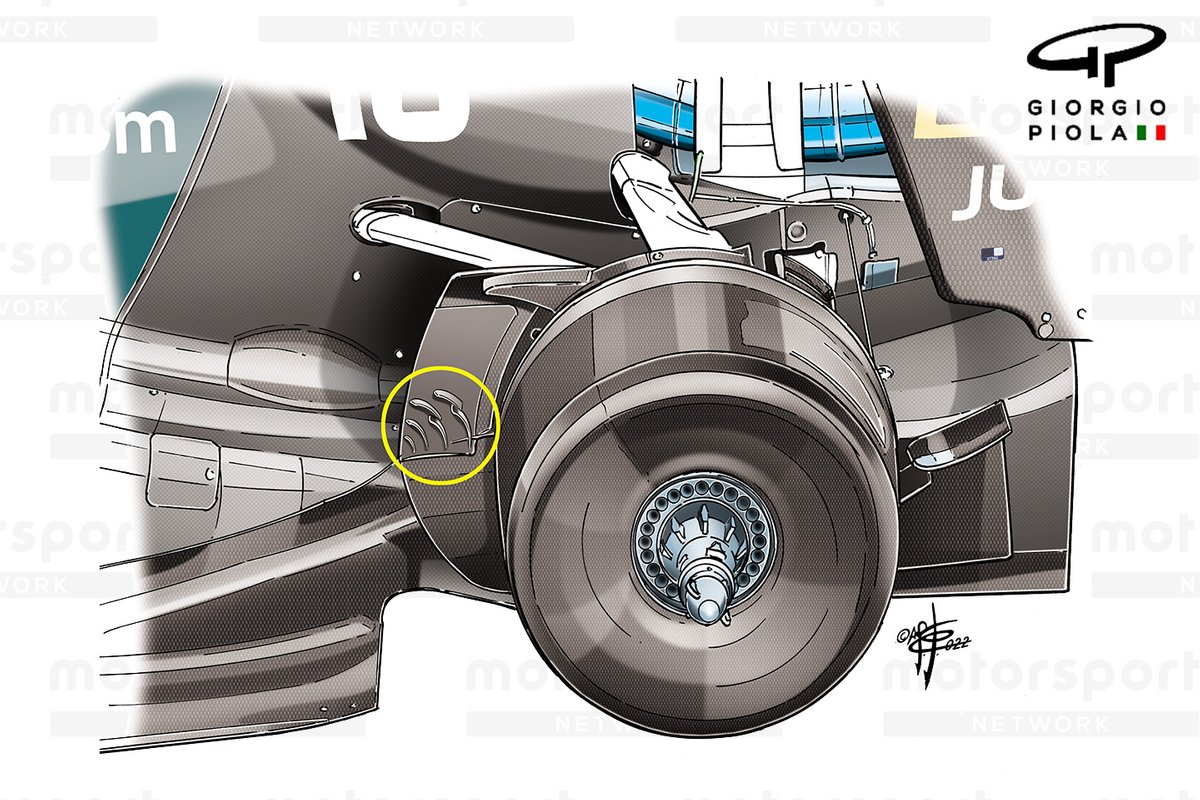 A cluster of fins was added to the inside of the brake duct fence at the British Grand Prix, as the team looked to improve both brake cooling and aerodynamic efficiency. 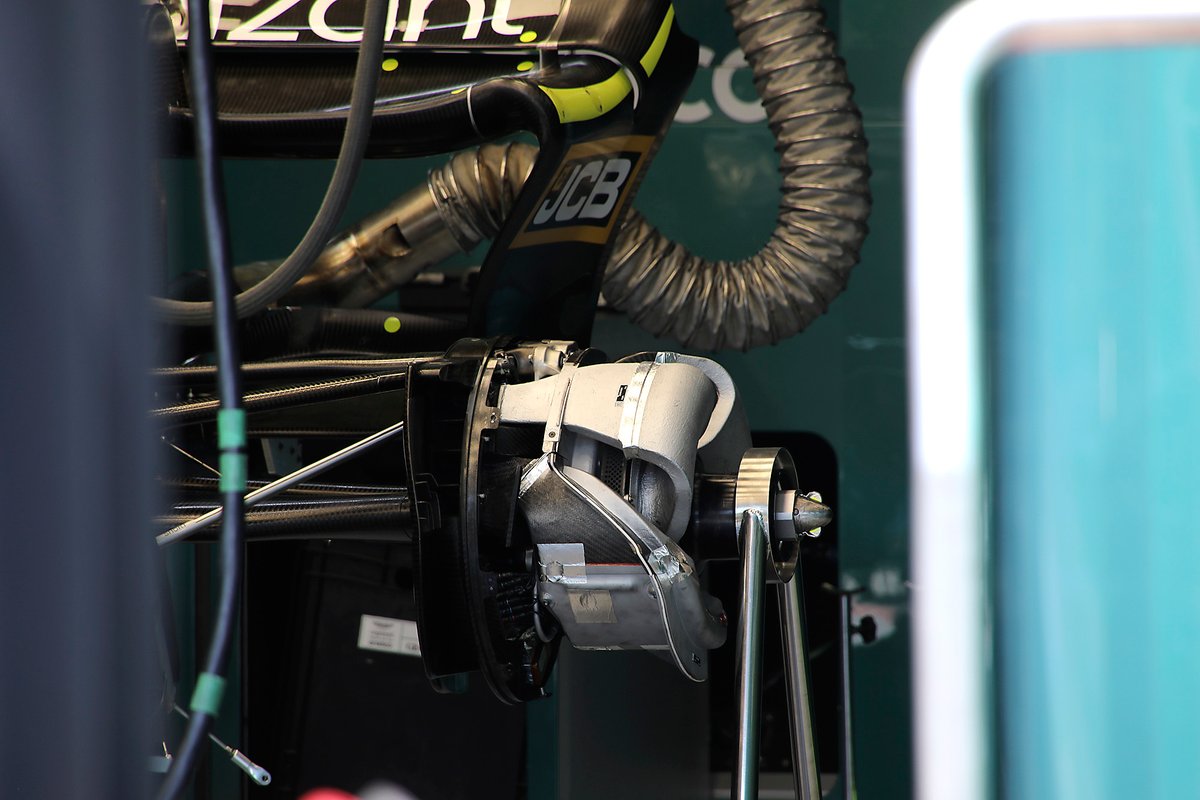 A look under the cover of the brake drum fairing at the rear of the AMR22 at the French Grand Prix, noting the pipework and shielding used to control the passage of cool air and deal with temperature transfer.

As the car is prepared for action and much of the bodywork remains unmounted, we're gifted a view of the bib section, with the main stay at the front and the sprung mechanism mounted in behind. 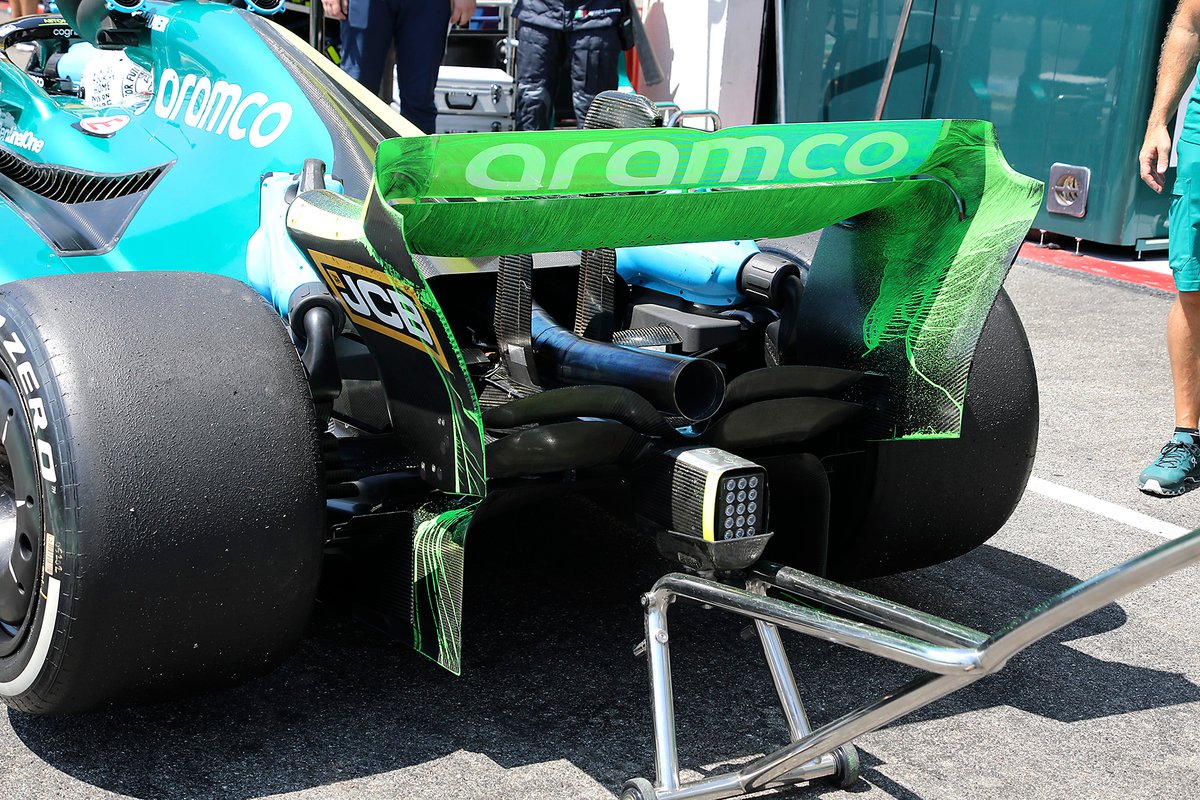 Flo-viz painted on the rear wing gives the team visual confirmation of the airflow's passage over the assembly. 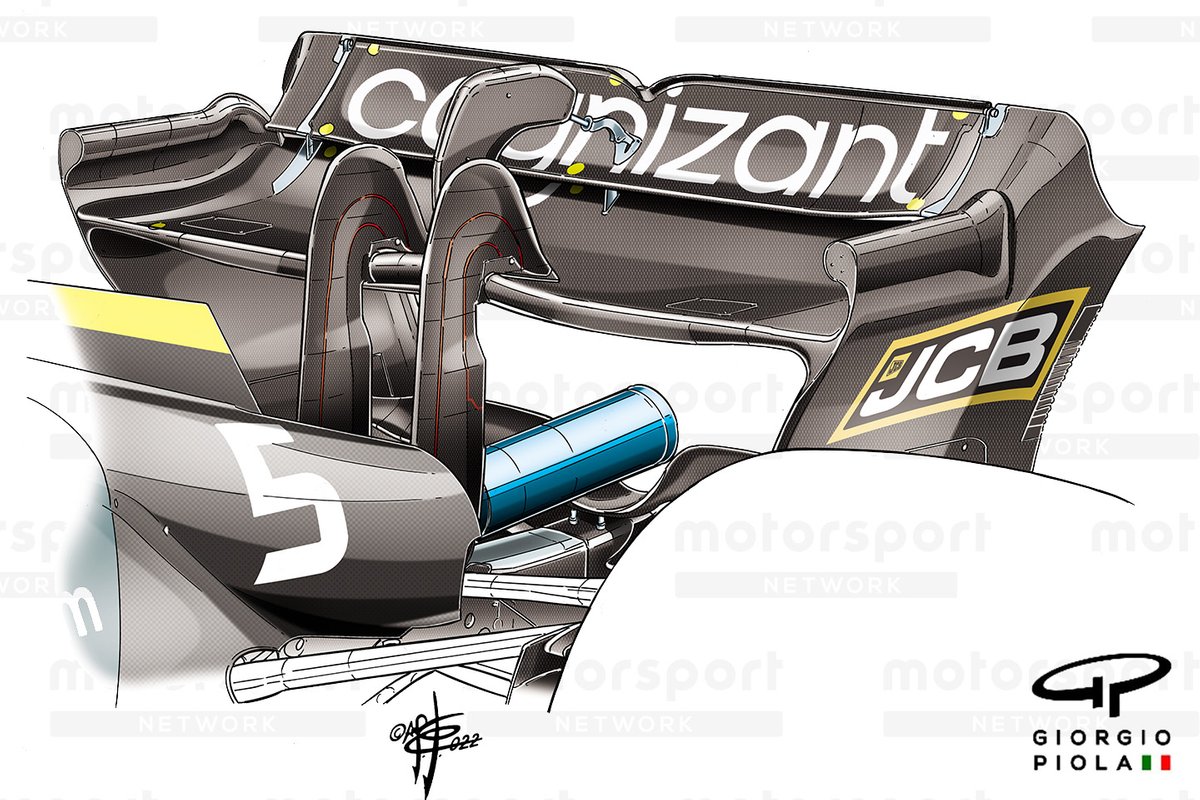 Aston Martin unveiled a rear wing design in Hungary that defied the intention of the regulations and created a faux version of the more familiar full-height endplate design we've seen before. This clever interpretation circumvented the regulations but required the surfaces to be rolled over in a very specific way to do so. 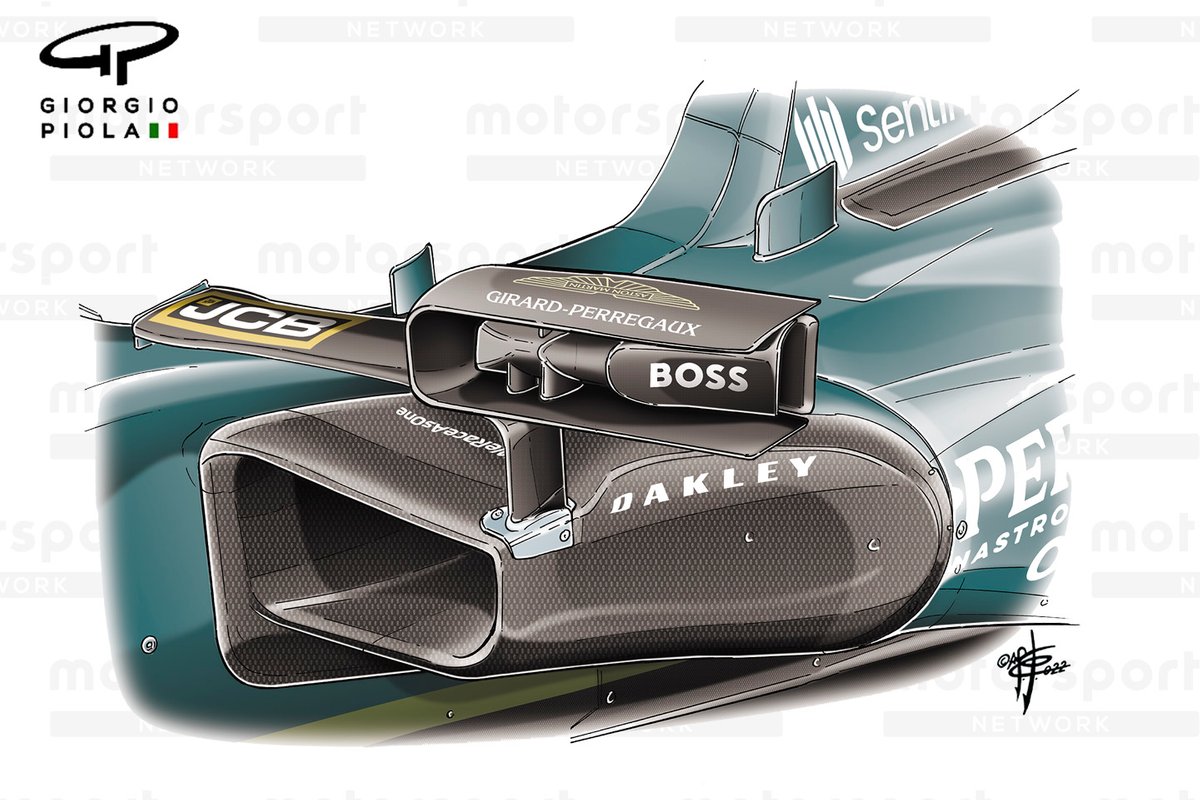 Aston Martin created an enlarged version of its regular mirror body and stay design for the group test that the teams conducted at the Dutch Grand Prix in preparation for 2023. An extra vertical baffle was added when compared with the regular design, in order to help divert the airflow's passage more effectively. 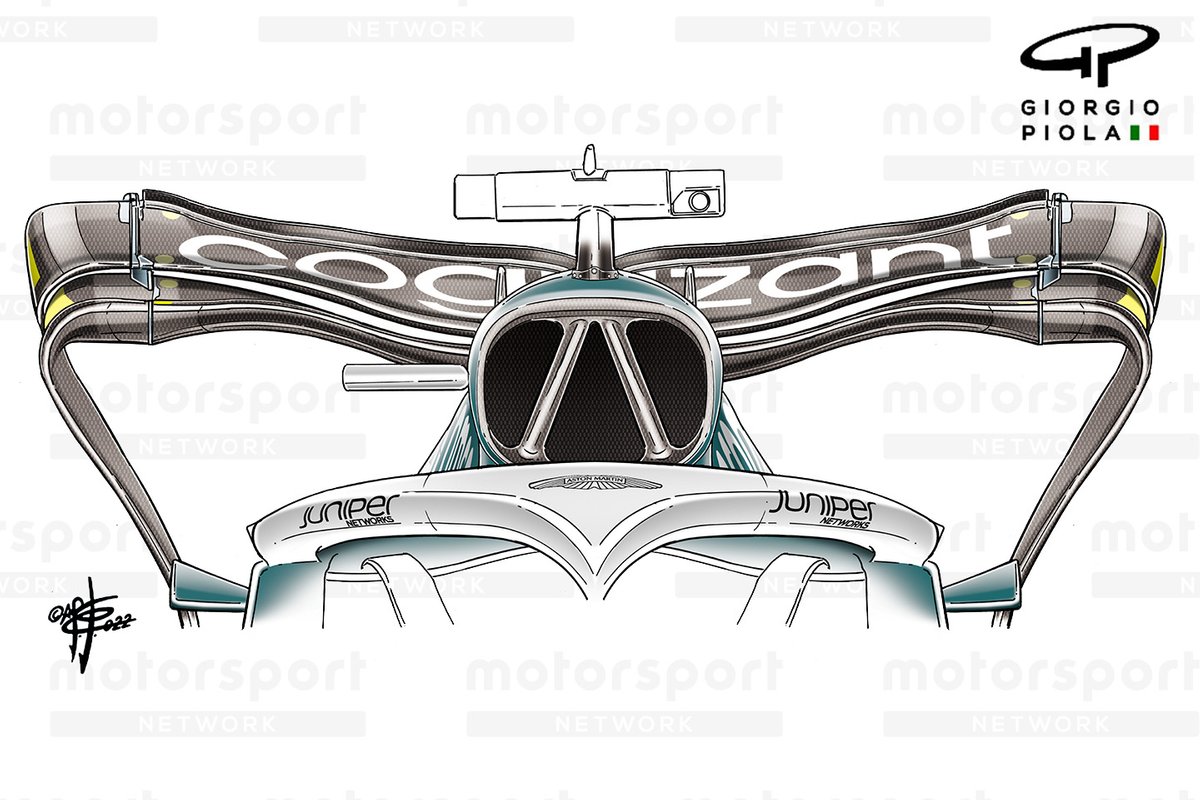 First seen in Belgium, but not raced until Italy, this rear wing iteration was not only the most radical design seen at Aston Martin but perhaps the entire grid. Featuring a spoon-shaped mainplane and heavily contoured upper flap, it was clearly very low downforce and thus low drag too. 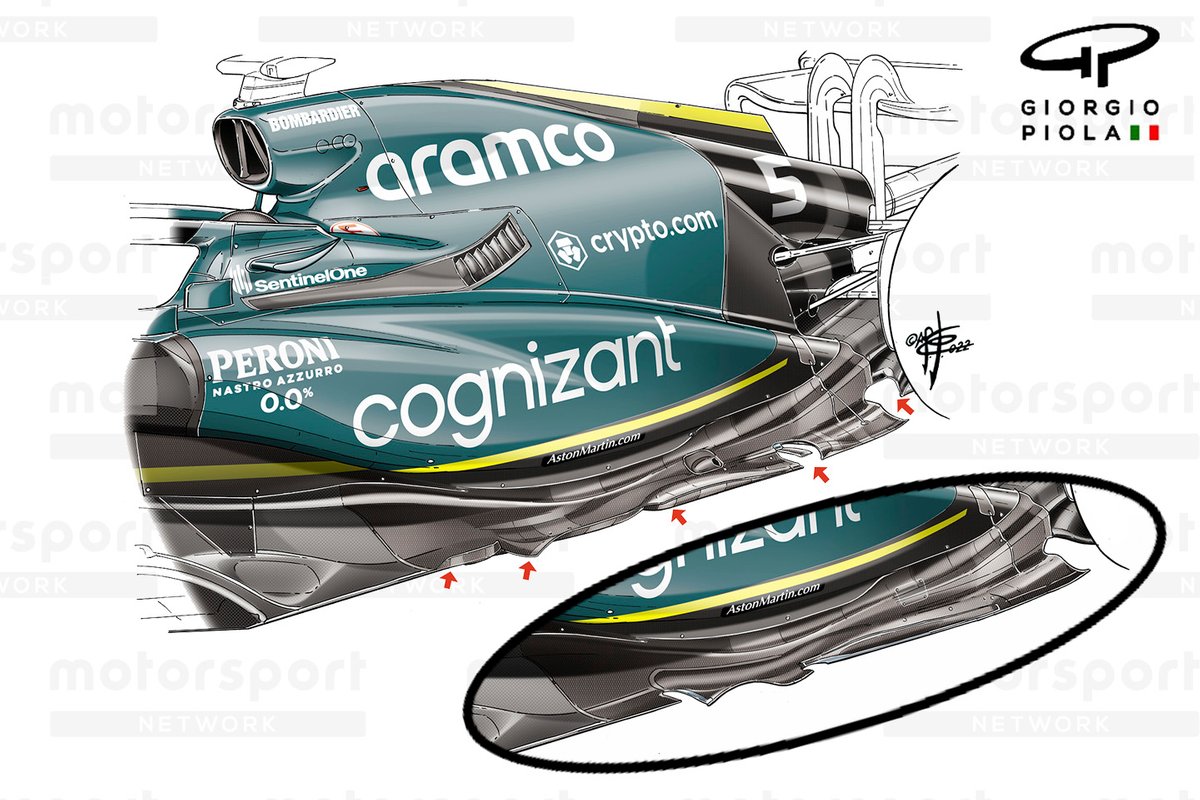 Aston Martin introduced a new floor in Singapore, once again taking cues from the developments already put in place by Red Bull on the RB18.

Wolff: F1’s political fights felt like ‘business as usual’ in 2022