Manor Formula 1 team driver Will Stevens blamed a sequence of errors for a disappointing result in Sunday's British Grand Prix, when he felt points were possible

The Briton was running 12th, comfortably ahead of team-mate Roberto Merhi, when rain started to fall at the north of Silverstone, leading to his Manor team calling him into the pits immediately.

A poor pitstop, crash in the changeable conditions and disappointing strategic calls cost Stevens a large amount of time in a race where high attrition meant he felt points were possible.

"When I came in, they weren't ready for me and I had to sit there for about 15 seconds before they started changing tyres, so I lost all the gap I'd built up to Roberto," Stevens said.

"Then the track was too dry for inters so we completely destroyed them in eight laps and the team decided to pit Roberto before me. 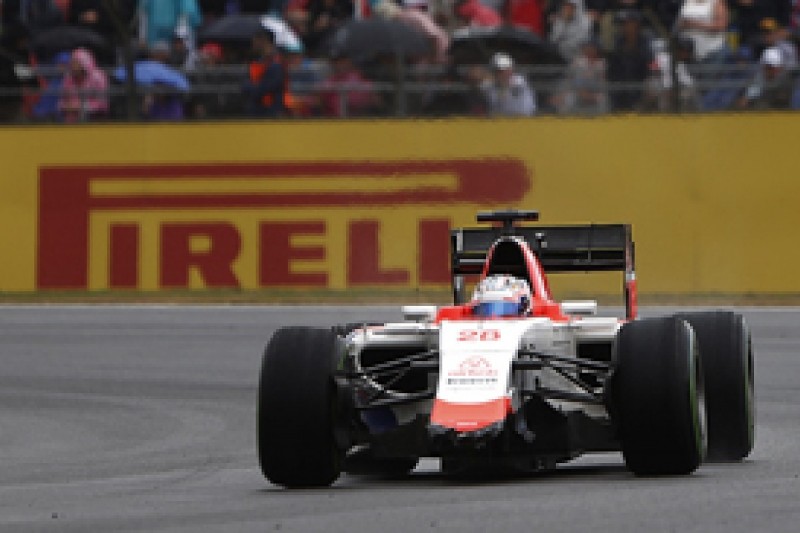 "The lap that they pitted him was when I came off because it started to rain again and the tyres were completely destroyed.

"We were pretty much driving round on slick tyres because we lost the tread on the inters.

"I wasn't even pushing that hard because I knew the tyres had completely gone and then the rears came round and I was a passenger after that.

"Then we pitted for new inters and we had to bring it home.

"That's the closest we've been to the points so I'm sure a few more laps and a bit of argy-bargy between everyone and we could have been [in the points]."

Despite a challenging first F1 race on home soil, Stevens was pleased with his weekend and the performance of the team's first upgrade package of the season.

"I'd say 90 per cent of the race was positive and the last 10 per cent was disappointing, but overall it's been a really good weekend for me and the team," he said.

"Silverstone should be our worst track. It's high-speed and has lots of long straights - the two things we struggle with.

"But the car itself gives us drivers more confidence in it, because we've got more grip.

"Hungary's a cool track, lots of corners and hopefully the upgrades we've got will bring us more aero so I think the likes of Hungary will probably bring us a little bit closer again."