Daniel Ricciardo like an older brother to Max Verstappen - Horner

Daniel Ricciardo has been like an older brother to Red Bull Formula 1 team-mate Max Verstappen this season, according to their team boss Christian Horner

The two were made team-mates when Red Bull demoted Daniil Kvyat to Toro Rosso and promoted Verstappen ahead of the Spanish Grand Prix.

Despite the potential for ructions as Verstappen made a winning debut, they have forged a good relationship off-track while on-track, Ricciardo has previously said he felt Verstappen's arrival in the team made him raise his level.

"The most important thing is there is respect," Horner told Autosport.

"We don't ask drivers to go out to dinner with each other but ask that they respect each other and respect the team.

"The two have done exactly that and the fact that their relationship goes beyond that is only a benefit to us.

"Daniel in many ways has almost been like an older brother to Max.

"Very often when you're listening in, in qualifying or the race, the comments about the car are almost identical so for the designers and R&D guys it's a great scenario to have both drivers chasing the same thing." 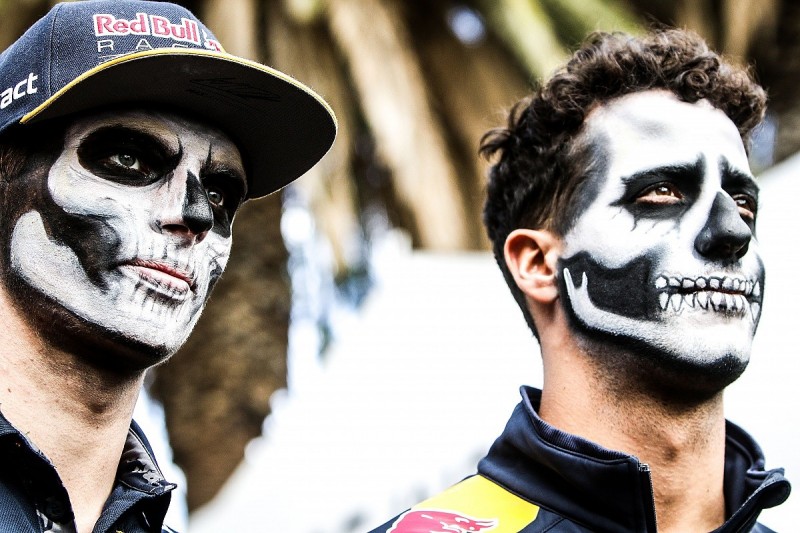 Ricciardo and Verstappen were evenly matched as Red Bull team-mates in racing situations, with Ricciardo edging the points head-to-head 220-191 and race finish head-to-head 8-7.

In qualifying, Ricciardo stretched his advantage, qualifying ahead of Verstappen 11 times to six.

When asked if he could split the two drivers in terms of performance, Horner said: "It's very very difficult to.

"Some weekends one has the upper hand, other weekends the other one has.

"It has been very finely balanced depending on the venue that we're at."

Should Red Bull give Ricciardo and Verstappen a car capable of challenging for the title in 2017, Horner said he planned to keep the rules of engagement "simple".

"We'll deal with situations on a race by race basis - it's how I've always believed in things," he said.

"There's enough rules as it is.

"Keep it simple, it's always been my philosophy in the approach to the sport, keep it simple."

Raikkonen: Ferrari suffered thanks to failure to fight for F1 title