The Red Bull driver has endured a troubled end to his final campaign with the team before he switches to Renault in 2019, suffering several mechanical failures that have cost him strong results and led to grid penalties at subsequent races for engine component changes.

Ricciardo had to serve a penalty in Brazil last weekend, after his turbocharger was damaged by a marshal's fire extinguisher when he retired from the Mexican Grand Prix.

He recovered from 11th on the grid to fourth, and said it was frustrating to keep having to race through the field when better results were on the table given Red Bull's speed.

"I saw the replay [of the Mexico incident], they showed it on Friday just to add a bit of salt in my wounds!" said Ricciardo.

"And there was another statistic that I've had more DNFs this year than Lewis [Hamilton] in the last five years or something, so they're really throwing some uppercuts at me.

"I feel like every time we start out of position or we start at the back, we have a fast car."

Ricciardo was keen not to place any blame on the Mexico marshals.

"I saw the replay, I thought it was just smoke," he said. "But there was a moment when the flames were there, so I'm not going to get angry at the marshal for doing that.

"Their job is to put a fire out if they see one. I'm not angry at anyone, I just wish it would run perfectly.

"As soon as I crossed the line at the end [in Brazil], I was quite upset because the podium was so close and we had the pace.

"We did everything we could, so I'm not upset about that. We surprisingly had a very fast car, and the race was fun. 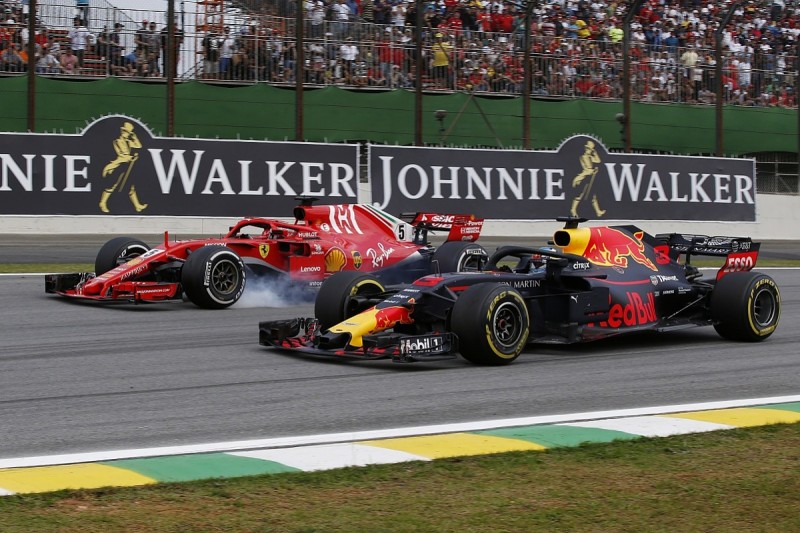 "I know we were better than fourth, but anyway, I've got one more chance with the team to get up there.

"With the pace we had I really have some optimism going into Abu Dhabi - I feel like it's always a stronger track for us than [Interlagos] is."

Red Bull team principal Christian Horner said Ricciardo's Interlagos charge had been both exciting and nerve-wracking on the pitwall.

"His pass on [Valtteri] Bottas, he told us on the pitwall as he came onto the straight 'I'm sending it' and he looked an awfully long way back. So there was a big intake of breath.

"The TV feed is behind the cars going past so I was very keen to see what the outcome from Turn 1 was.

"Luckily I could see the red and yellow of the bull ahead of the silver Mercedes."

The F1 mindset that is frustrating its owners