The Red Bull driver ran second after passing Mercedes driver Nico Rosberg through Turn 2 on the opening lap and was a second ahead of the Mercedes when he made his second pitstop at the end of lap 24.

Ricciardo was destined to jump back ahead of Rosberg when the Mercedes driver stopped until the virtual safety car was deployed on lap 31 after Red Bull team-mate Max Verstappen ground to a halt with a gearbox problem.

That allowed Rosberg to make a pitstop while Ricciardo was circulating at reduced speed, with the Mercedes driver coming out of the pits with an advantage that shook out at 2.5s when the race got back underway - a gap that quickly doubled.

Ricciardo eventually finished 15 seconds behind Rosberg in third, saying on the radio at the finish the impact of the VSC "sucks".

"We seemed to be, at that stage, able to hold on to second," said Ricciardo of the phase of the race before the VSC.

"With the VSC, we lost 10 seconds to Nico, so I believe after the pitstops we would have had five seconds on him. 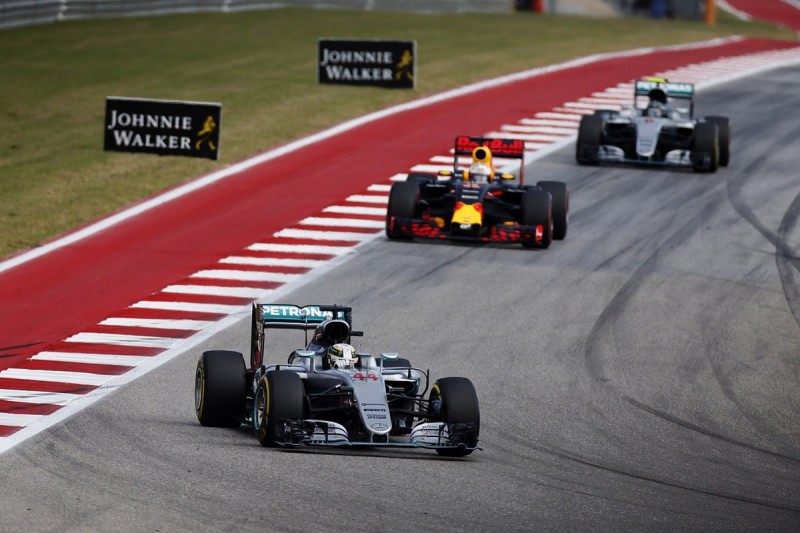 "But after the pitstops, he had close on five seconds on me, so that was frustrating.

"It would have been interesting, even if he caught me at the end, to at least have a fight.

"The race became a bit not-that-exciting after the VSC, without it, it would have made it a bit more spicy at the front.

"Unfortunately, third was the outcome."

After Red Bull was able to challenge Mercedes in the race and potentially split Lewis Hamilton and Rosberg had the VSC not intervened, Ricciardo is confident of further strong showings this year.

"I'd say Abu Dhabi is where I fancy my best chances, it's been a strong circuit for me and us as a team," he said.

"Mexico is still new, the surface is going to be a lot different when we go there [compared to 2015] and it's going to be rubbered in.

"Brazil, it's been a while since we've had the magical Brazil downpour so maybe we can get one of those this year and have a chance."