Kimi Raikkonen is expected to stay on at the Hinwil team, while Mick Schumacher is hotly tipped to take the second seat that belongs to Ferrari, and which is currently occupied by Antonio Giovinazzi.

Schumacher was supposed to drive in FP1 at the Nurburgring on Friday, but bad weather meant that he was denied the opportunity.

Although no alternative slot has been scheduled Vasseur still expects a decision to be made sooner rather than later.

"I think it was last Friday that I told you that it would be in the next few weeks," he said.

"I think that in the course of October we have to take a decision to be relaxed about this for the last four events."

Regarding the lost Friday session he said: "It's a pity and for everybody, mainly for Mick.

"He was very committed, he went to the factory last week, he worked very hard with the engineers, he did a good preparation for the FP1, and then happened what's happened.

"For sure it's a shame. But I think at least he took something from the preparation." 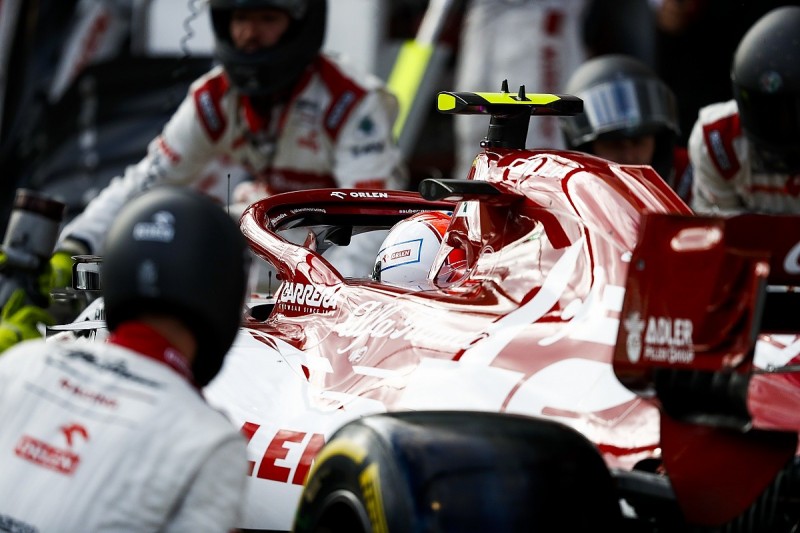 Vasseur acknowledged that it won't be easy to slot Schumacher into the car for another FP1, especially given the run of new circuits that is coming up, and the need for Giovinazzi to get mileage.

"It's not so easy because at Portimao everybody will have to learn the track, and it's not the best place to give the FP1, and then Imola it's without FP1.

"Then we have to go to Istanbul. We have to sit down and discuss with Antonio, but it's not the easiest one now, I think. And he has the two events in Bahrain that he's racing in F2."

Vasseur added that any test outing was not about ultimate lap time, but rather to assess the driver on how they work within the team and with the engineers.

"When a driver is giving up FP1 to someone else, the first approach is to avoid crashes, and damage the FP2. So we are asking them to stay a bit calm.

"And then you can't judge them on the lap time, that would be unfair.

"But it's more on the approach, on the way that they are picking up the pace during the FP1, and on the feedback that they are able to give to the team.

"As a team it's the only way we could have to judge the attitude, the relationship that he's been able to build up with the team and the technical feedback."