In the latest in Autosport's 'My Favourite Race' series, STEFAN MACKLEY remembers the day Michael Schumacher brought a 21-year barren spell for Ferrari to an end at the 2000 Formula 1 Japanese Grand Prix

There has always been something magical about the Japanese Grand Prix, and perhaps more specifically the Suzuka circuit. With its fast, sweeping bends and no margin for error - especially during the 1990s and early 2000s when many of the gravel traps had yet to be replaced by tarmac run-offs - it was a real drivers' circuit.

In another era of Formula 1, it also had a habit of taking centre stage for championship deciders.

Perhaps most famously, it had been the venue for the climax to the 1989 and '90 championships where Ayrton Senna and Alain Prost had collided with each other on both occasions. Fast forward to 1998 and '99 - when this writer's interest in F1 first began - and once again it was the scene of Ferrari heartbreak.

Michael Schumacher had been left to perch on top of a tyre barrier and lament what could have been in the former season after he suffered a spectacular tyre failure down the front straight in his Ferrari F300, dashing any hopes of claiming his first drivers' title for the Scuderia. Twelve months later, it was team-mate Eddie Irvine who missed out on the title for the Prancing Horse after a lacklustre performance en route to third. On both occasions, McLaren's Mika Hakkinen had been the victor and in 2000 he was aiming for a third straight title. 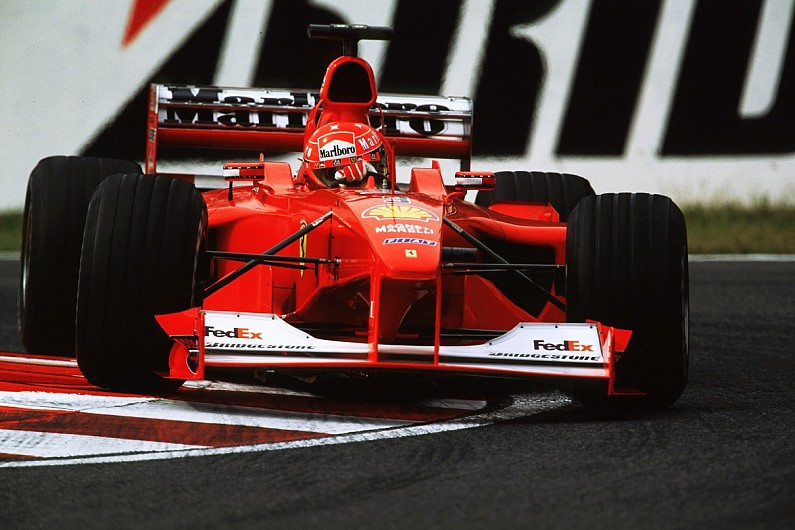 The 2000 season had once again been a battle between Ferrari and McLaren, as well as Schumacher and Hakkinen. Heading into the Japanese Grand Prix, the odds were stacked in Schumacher's favour after he had taken victory at the previous round in the United States at Indianapolis - his seventh win of the season - where the V10 Mercedes engine in Hakkinen's McLaren MP4/15 had failed.

It gave Schumacher an eight-point gap on his Finnish rival with two races to go and meant that, if he could take victory in Japan, the title would finally be his in the red of Ferrari with the Malaysian Grand Prix still to come. While Schumacher had spent the four previous seasons at Maranello in search of his third title, the wait for another drivers' crown at Ferrari had been even longer - twenty-one years to be precise, as my dad would always remind me - when Jody Scheckter led home team-mate Gilles Villeneuve for a Ferrari 1-2 at the 1979 Italian Grand Prix at Monza.

Since then, there had been barren spells and near misses, all of which made the 2000 Japanese Grand Prix anything but straightforward - and even before the race, the tension had been high.

Hakkinen's McLaren made the perfect launch and was well ahead of the Ferrari F1-2000 by the time Schumacher had made his customary swipe across the width of the circuit. If Schumacher was going to win the title he would need to find a way past

Although there may have been no points awarded on Saturday, that didn't stop Schumacher and Hakkinen putting on a scintillating display in qualifying as they traded fastest times throughout the one-hour session - improving by just mere fractions each time.

With Hakkinen losing a few crucial tenths on the exit of the last chicane on his final run, it meant Schumacher and Ferrari would start on pole by just nine-thousandths of a second. It was just a taste of what was to come.

"Pole position is the best start position for the race as we all know and you simply want to achieve that," said Schumacher in the post-qualifying press conference.

It may have been the best starting position, but as often seems to be the case in races at Suzuka when a title is up for grabs, the polesitter tends to lose that advantage. 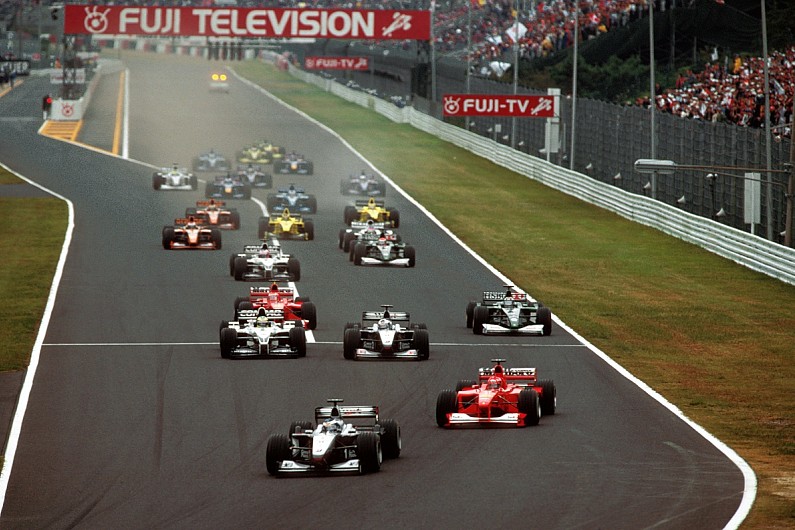 And in 2000, as the lights went out, Hakkinen's McLaren made the perfect launch. He was well ahead of the Ferrari F1-2000 by the time Schumacher had made his customary swipe across the width of the circuit, meaning if Schumacher was going to wrap up the title one race early he would need to find a way past.

For the opening stint, the leading pair circulated never more than three seconds apart and in a class of their own. Behind them, David Coulthard's McLaren sat third followed by the Williams of Ralf Schumacher and Irvine's Jaguar, while the second Ferrari of Rubens Barrichello completed the top six after a poor start.

Hakkinen was the first of the front duo to pit on lap 22 before Schumacher came in on the following tour, but was unable to jump his rival. The status quo remained for the second stint as Schumacher - who had taken on more fuel than Hakkinen at the first stop - stayed within touching distance of the McLaren.

Hakkinen pitted for a second time on lap 36. Light rain began to fall as he exited the pits, making the track treacherous yet not quite wet enough for a change from the Bridgestone grooved tyres.

With a clear but damp track ahead, Schumacher set about making up the deficit. He came in for his own stop four laps later, having encountered traffic and the stationary Benetton of Alex Wurz entering the pits on lap 40.

Hakkinen also had had his problems with backmarkers and, as the Ferrari exited the pits for the final time, the McLaren was only just entering the pit straight. 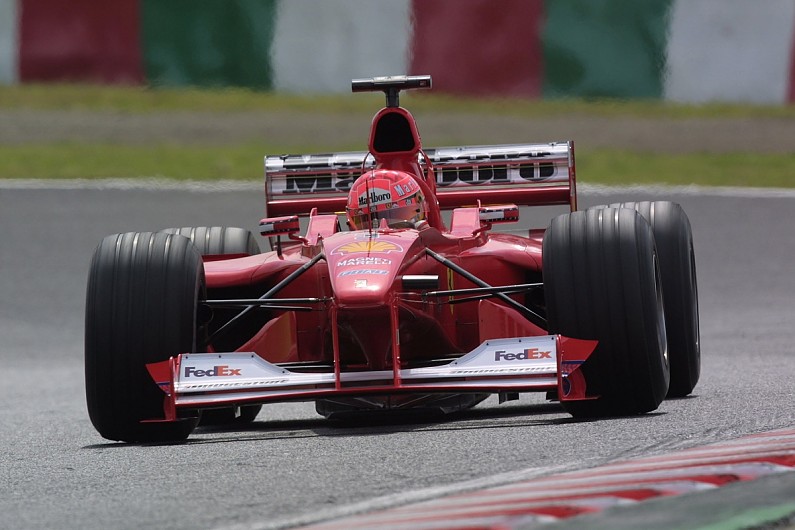 "All my life, I will never forget that radio signal from Ross [Brawn]," recalled Schumacher later when recounting the 2000 Japanese Grand Prix for Autosport's Race of My Life series.

"I was very tense, and fully expecting him to say: 'It was looking good,' but suddenly he said: 'It's looking bloody good!'

"I didn't expect that it would work out after the second pitstop. My two last laps before the pitstop were not very good. I had been caught in traffic, and had had to overtake a Benetton that had spun off the track. And then came Ross's radio message - unbelievable."

"For over 40 laps Mika and I did almost identical times, like a perpetual qualifying lap. It was certainly one of the best races I have ever driven, if not the best. Mika was fantastic and pushed me to the very limits" Michael Schumacher

Despite having to manage changeable conditions and an ever-present threat from Hakkinen behind, Schumacher crossed the line with 1.837s in hand and punched the steering wheel in celebration - to such an extent that is was taken out of service as a precaution!

The sheer dominance of Schumacher and Hakkinen over the 53 laps had been so great that third-placed Coulthard was more than a minute in arrears, with Barrichello and Jenson Button's Williams the only other drivers to remain on the lead lap.

"Looking back, I have to say that this race was something very special for me. Not only because it brought me the title, but also because it was such a high-class race. It really was racing at its top level," said Schumacher. 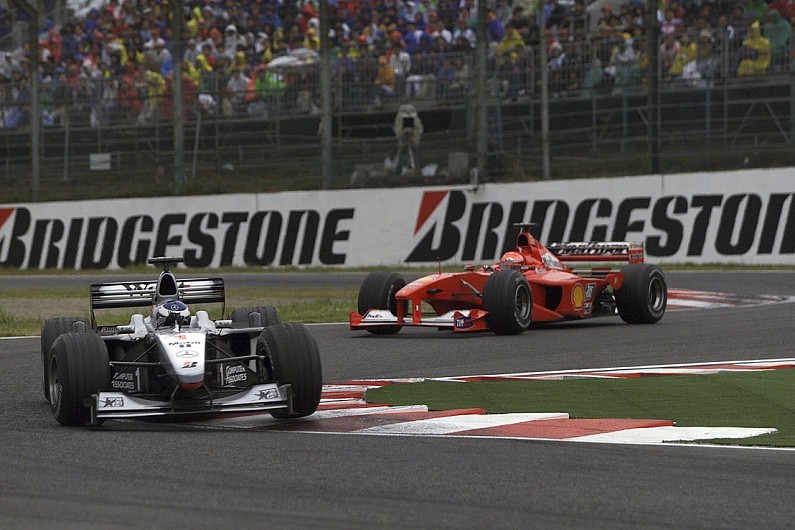 "For over 40 laps Mika [Hakkinen] and I did almost identical times, like a perpetual qualifying lap. It was certainly one of the best races I have ever driven, if not the best. Mika was fantastic and pushed me to the very limits."

As races that decide a championship go, I admit there have been more exciting. There was no on-track overtake, no charge through the field or last-lap drama. It had been a 53-lap qualifying session, but which had also shown racing at its purest; everything was on the line, and the slightest mistake would have cost either driver everything. The outright speeds may have been less than they are today, but even now watching those cars move around to the chorus of V10s still gives me more of a buzz.

Not only that, but for my dad - and millions of other Ferrari fans around the world - this race had finally brought a 21-year wait for a drivers' title to an end. Just look at Liverpool's Premier League success this year to get a sense of what that means to a fanbase, one accustomed to near-misses season after season.

My dad's fears that it would be another 21 years before Ferrari would taste another title success ironically couldn't have been further from the truth, as it was just the beginning of one of the most dominant periods for driver and team in the history of F1. 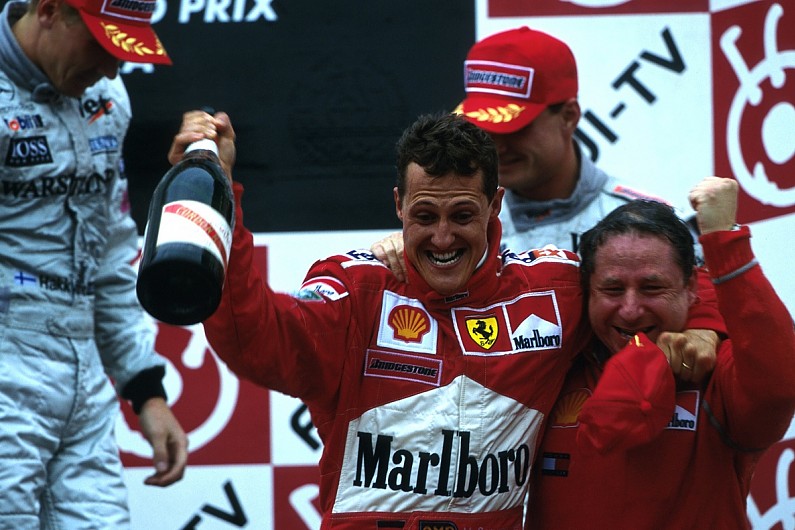