Red Bull boss Christian Horner thinks Formula 1's race stewards should be given extra flexibility if a driver performs donuts after the race.

Sebastian Vettel celebrated his fourth consecutive world championship title with a spectacular series of donut spins on the start/finish line after the Indian Grand Prix, then knelt in front of his car and threw his gloves into the crowd.

His actions earned him a reprimand on the grounds that he had not proceeded directly to parc ferme. Red Bull was handed a €25,000 fine.

Horner has expressed his disappointment about that punishment, but he is aware that stewards have to take action if a driver is in breach of the rules.

He has suggested, however, that rather than change the rules to allow donuts, the stewards should be more free to use common sense for one-off events like Vettel's title celebrations.

"I think the stewards need to be empowered to give a little more leniency in extraordinary circumstances," said Horner, when asked by AUTOSPORT about what should be done.

"They could have been a lot harder in their penalty and they picked the lowest penalty they could in a reprimand and a fine for the team. And that was despite it being the drivers' actions. We won't be recharging him for it."

'GOOD FOR THE SPORT'

Horner thinks that Vettel's celebrations were a good thing for F1 and says other sports allow such moments to pass.

"Sometimes in life there are things that happen that don't fully comply with a regulation," he said. 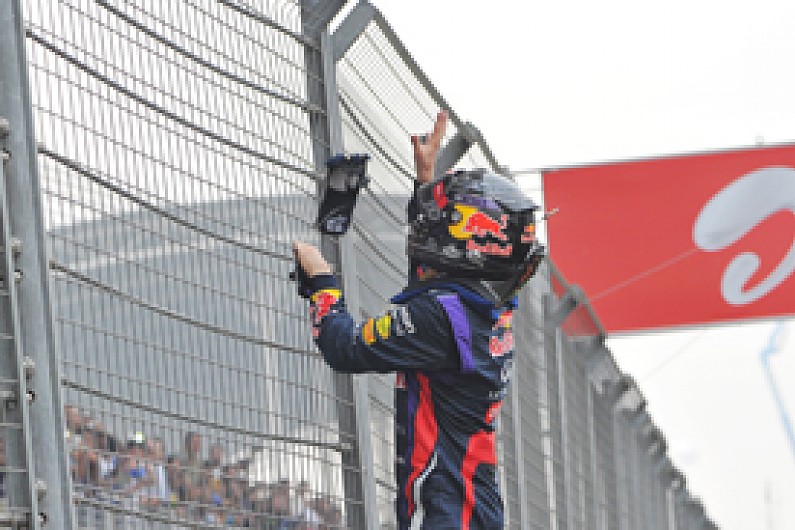 "Perhaps it is a tennis player climbing out of a court and going to embrace his parents in a box at Wimbledon, or a footballer going to hug a family member in the crowd.

"What Sebastian did was exuberant, but he had just realised a fourth world championship and he chose to celebrate that.

"The downside was putting that stress on the engine and gearbox, and with the tyres, they are supposed to be picking up rubber for the in-lap.

"He went against all of that - but from a team point of view it was exactly the right thing for him to do. It was good for the sport and it is a shame that it was penalised.

"I can understand the stewards have a set of rules in front of them, but sometimes you hope that common sense does prevail."