Lukyanuk, who finished fourth in the championship last year after missing two rounds due to a serious injury, led the way after just the second stage and went on to set a time outside the top five in only two of the 15 stages.

Neither running wide into a field on Thursday or slowing to avoid a herd of cows in the road prevented the Russian from extending his lead to 47 seconds over Azorian driver Moura.

Moura did begin to cut into Lukyanuk's advantage following a brake caliper leak for the leader, but with only one stage to run prior to the final service the issues were resolved for the final three stages.

A year after crashing out of the event while leading, Lukyanuk did the most damage to his eventual winning margin - allowing it to drop to 16.4s after he stopped before the finish of the final stage to celebrate the win by donutting his Ford Fiesta R5.

Three-times Azores Rally winner Bruno Magalhaes revised his set-up after struggling on the opening day to challenge for second when Moura suffered a puncture, but a broken differential sustained on Saturday morning consigned him to third, nine seconds adrift of runner-up spot. 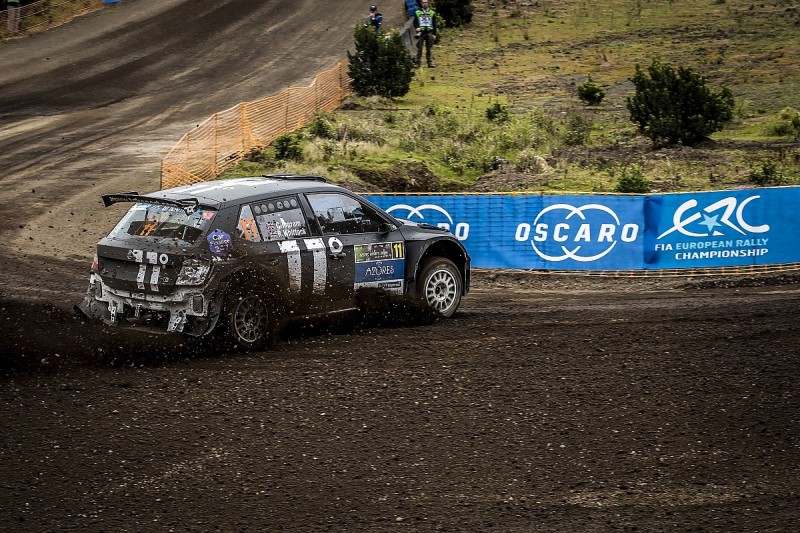 Although familiar with the Azores event's roads as reigning Junior Under 27 champion, British driver Chris Ingram (pictured above) still made an impressive start to his R5 career.

He finished fourth overall and won the Junior Under 28 class by more than a minute when nearest rival Martin Koci crashed out on the final stage.

Ingram ran as high as third in his Skoda Fabia despite a stall and bumper-removing brush with a tree, but dropped out of podium contention with a puncture on the final day.

Fredrik Ahlin, who missed out on British Rally Championship title honours by a single point last season, was fifth, with Diogo Gago taking the Junior Under 27 class victory in his Peugeot 208 R2.