The Ford Fiesta R5 driver entered the gravel-based event as the favourite with a 24-point lead, although Portuguese frontrunner Bruno Magalhaes still had a chance to take the title with 39 points available on the event for a win and finishing at the front on both legs of the event.

But he was taken to hospital for checks on Saturday after sending his Skoda Fabia R5 into retirement via a tree with a hefty impact. He retired citing "personal reasons".

Kajetanowicz built another campaign on consistency, with his one win in seven events coming on the Acropolis Rally in Greece.

But he finished every event before Latvia to maximise his advantage over Magalhaes, who won the opening round in the Azores but ultimately lost the title thanks to retirements in Cyprus and Latvia. 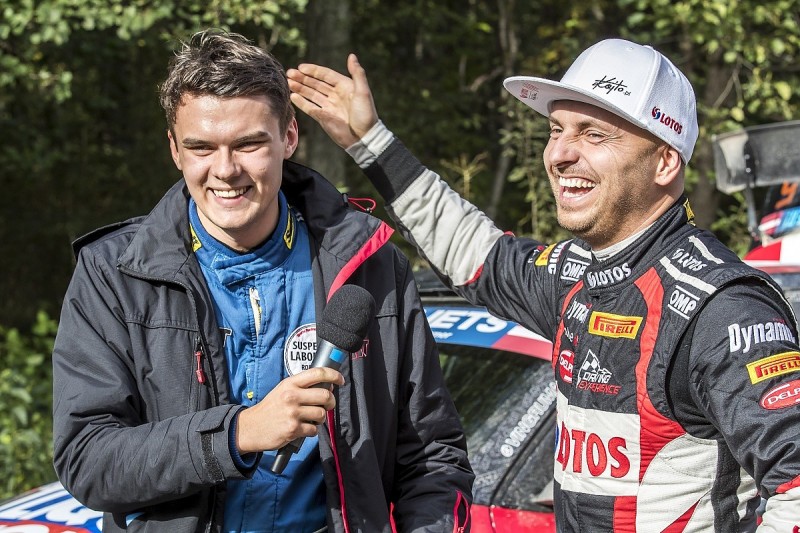 Sunday's event went down to the wire between two highly rated young drivers in Latvian Nikolay Gryazin (above, left) and Kalle Rovanpera, after early leader and mercurial Russian Alexey Lukyanuk - still recovering from multiple bone fractures after a testing crash in May - retired with electrical issues.

Gryazin led overnight in his Fabia, while Rovanpera made his second ERC appearance in a row, albeit in a different car switching to a Fiesta R5 ahead of his WRC debut later this month on Wales Rally GB.

Gryazin pulled away on Sunday morning to win by 18.5s. Pole Lukas Habaj rounded out the podium in his Fiesta.

The ERC Junior Under 27 Championship - for front-wheel-drive R2 cars - was also decided on the event.

Brit Ingram takes the title and €100,000 towards a campaign in an R5 car in the Under-28 championship next year, after his works-Opel Adam team-mate Jari Huttunen suffered a double puncture on Sunday's first stage.

Ingram took victory on the first two rounds in the Azores and the Canary Island Rally, while two mechanical issues started Huttunen's season off in the wrong way.

He recovered to win in Poland and also took second in Italy on the rally held around the capital of Rome.

The Finn recently won a drive with Hyundai in an i20 R5, which will start with an appearance on Wales Rally GB in the World Rally Championship later this month.