Maximilian Gotz was crowned the 2021 DTM champion in a controversial season finale at the Norisring after Mercedes elected to use team orders, denying pre-race favourite Liam Lawson of the title.

Despite Lawson running outside the top 10 after being hit by Kelvin van der Linde at the start, his buffer in the championship standings' was enough to clinch the title by seven points as the race reached its final stages.

But with less than a handful of laps to run, Mercedes asked both long-time race leader Lucas Auer and Philip Ellis to let Gotz through and take the win, with the two extra places he gained helping the German to sensationally snatch the title by three points from Lawson.

In a repeat of Saturday's opening encounter, van der Linde tried to dive past polesitter Lawson under braking for Turn 2 - this time by taking the inside line into the hairpin.

But the two drivers came to blows at the apex, with van der Linde running deep into the corner and leaving both AF Corse Ferraris of Lawson and Alex Albon's stand-in Nick Cassidy wide.

The Kiwi duo had to wait for the rest of the field to pass by before they could reverse their cars, dropping to the rear of the pack and without a chance to mount a fightback.

To make matters worse, Lawson reported a broken steering that forced him to make several unscheduled pitstops, before rejoining the track with a car that was lapping 20 seconds off the outright pace.

With Lawson out of the running and van der Linde losing time in the incident, Auer seized the lead from fourth on the grid as Ellis moved up to second to establish a Winward Mercedes 1-2.

Heading into the final laps of the race, Auer sat a comfortable six-second clear of Ellis, with Gotz running some way behind in third.

But in a remarkable late twist, both Auer and Ellis slowed down to let Gotz through, with the German driver taking the lead on lap 64 of 67 to clinch the title. 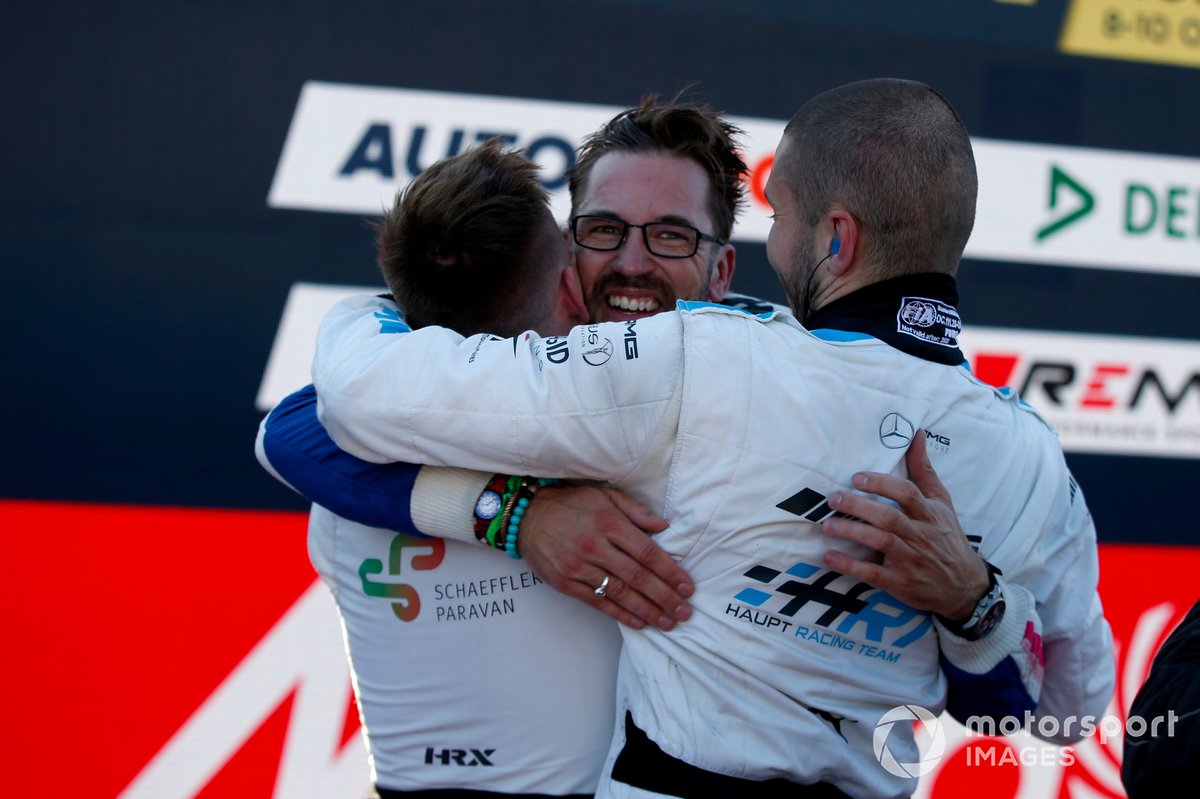 The results means Mercedes has won both the drivers' and the manufacturers' championship on its return to the DTM, with only the Red Bull / AF Corse team denying it a clean sweep of titles.

Auer was eventually classified second, having relinquished what could have been a third victory in as many rounds.

A five-second penalty for a pitstop infringement and a collision with Cassidy demoted Ellis to 10th, and lifted the Mucke Mercedes of Maximilian Buhk to the final spot on the podium.

Abt Sportsline's Mike Rockenfeller was classified fourth in his last DTM appearance as an Audi driver, the only non-Mercedes driver in a top six completed by GruppeM's Daniel Juncadella and GetSpeed's Arjun Maini, while Walkenhorst driver Marco Wittmann was classified seventh in the farewell DTM outing for the BMW M6.

The top 10 was rounded out by HRT's Vincent Abril, the Abt Audi of Sophia Floersch and Ellis.

Van der Linde slipped outside of the points and finished down in 17th after picking up a late puncture, likely after contact with Gotz while battling for third position.

Gotz was trying to take advantage of van der Linde's cold tyres, but the Audi driver cut across the track coming out of Turn 7 - leading to the two drivers making contact.

A heartbroken Lawson limped home 24 laps down in 18th.