Mercedes driver Maximilian Gotz claimed a dominant victory in the penultimate DTM race of the season at Norisring, as Liam Lawson extended his points advantage with a podium.

With Abt Sportsline's Kelvin van der Linde finishing a disappointing fourth after an opportunistic lunge at the start backfired, Lawson will head to Sunday's title decider with a significant 18-point advantage over the South African.

Gotz's second victory of the season keeps him well in the title hunt, just one point behind van der Linde in the championship standings and 19 adrift of championship leader Lawson.

At the start of the race, van der Linde tried to pass polesitter Lawson into the first braking zone at Turn 2 but ran too deep into the corner, leaving him wide at the exit and allowing a number of cars to come through.

As van der Linde dropped from second to seventh after brushing the barriers on the outside, Lawson came under pressure from the Winward Mercedes of Philip Ellis, who had taken a narrow line into Turn 2 after starting from fifth on the grid.

Lawson and Ellis ran side-by-side on the run down to Turn 4, with the AF Corse driver powerless to defend the lead with 18kg of ballast on his Ferrari.

Over the next few laps, Gotz was on a charge in the HRT Mercedes, dispatching a fast-starting Nick Cassidy at Turn 7 before making the same move on Cassidy's team-mate Lawson on lap 7 of 67.

In a short span of time Gotz had closed in on race leader Ellis and on lap 10 he pulled off the same overtake into the final hairpin, moving to the front of the pack for the first time in the race.

Within two laps, Gotz had pulled out a lead of over a second and he continued his advantage up front, returning to the track with a seven second gap after his pitstop on lap 23.

Despite the HRT team instructing him to slow down his pace in the second half of the race, Gotz still took the chequered flag by the best part of 10 seconds, scoring a first win in the DTM since the Lausitzring round in July. 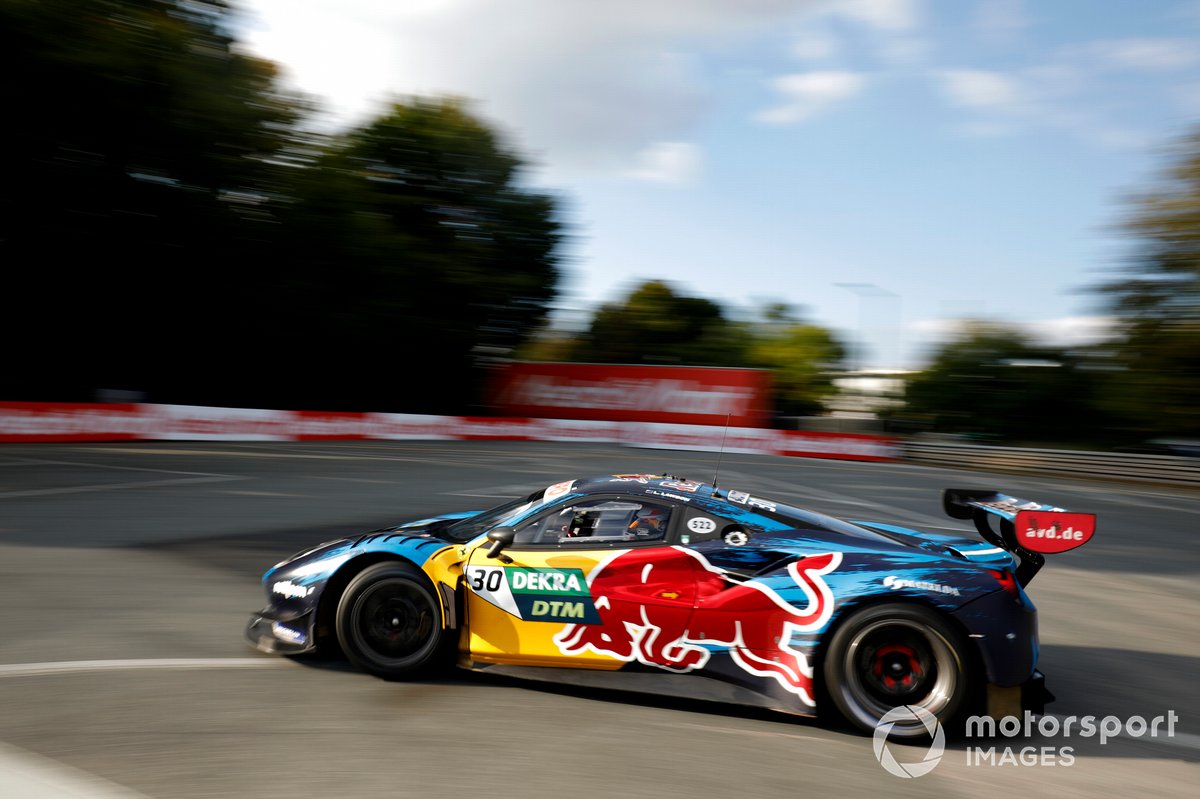 While Gotz's position was never threatened once he moved into the lead of the race, the fight for second place went down to the wire between the GetSpeed Mercedes of Arjun Maini and championship leader Lawson.

Maini had slipped from fourth to sixth at the start but a rapid in-lap - 1.3s second quicker than Lawson's - and an equally quick pitstop brought him back on track in second place.

The Indian driver managed to build a small buffer up front after completing his pitstop, but Lawson managed to eat into its advantage in the final stages of the season.

Maini ultimately managed to hold on to second to claim a maiden podium in the DTM, with Lawson settling in third place in the lead AF Corse Ferrari.

However, with championship rival van der Linde finishing right behind him in fourth, Lawson remains the favourite for the title with just Sunday's race to run.

Van der Linde was always going to face an uphill battle to finish on the podium after slipping to seventh at the flag and was only able to regain one position in the first stint - when Lucas Auer ran wide at Turn 2.

A quick pitstop sequence allowed him to return to the track in a net fourth place, but he couldn't pass Lawson on track despite the Red Bull driver carrying the extra weight in his car.

Fifth place in the race went to the other AF Corse Ferrari of Cassidy, whose brilliant getaway laid the foundation of a strong result in his maiden appearance of the season.

The Kiwi didn't complete his pitstop until the final two minutes of the race and emerged right in front of rival van der Linde, but couldn't keep the Audi driver behind - the two drivers banging wheels at Turn 7.

Auer finished sixth for the Winward team ahead of GruppeM Mercedes' Daniel Juncadella, while Team Rosberg Audi's Nico Muller scored only his second points finish in four rounds with eighth.

Mucke Mercedes's Maximilian Buhk and Ellis rounded out the points scorers in ninth and 10th respectively.

After losing the lead to Gotz on lap 10, Ellis was tagged by Lawson as they went into the Turn 5 left-hander, with the contact pitching him into a half spin and leaving him tumbling down the order.

Esteban Muth was T3 Lamborghini's top finisher in 11th, while two-time DTM champion Marco Wittmann failed to score a point for the third race in succession after finishing 12th. The Walkenhorst driver, who qualified on the back row, is now out of the title fight.