BMW's Philipp Eng bounced back from a disastrous start to his DTM season to take pole for the second race of the opening round at Hockenheim.

Eng, whose RBM-run M4 was stricken in FP2 and first qualifying by a sensor problem that shut down the electronics, put in a blistering lap late in the session to beat Saturday race winner and BMW stablemate Marco Wittmann by a clear 0.416 seconds.

The Austrian's performance proved the pace of the new, 2.0-litre turbocharged, four-cylinder DTM machines - it was 1.5s quicker than Tom Blomqvist's qualifying lap record from 2017, and 3.3s faster than Gary Paffett's qualifying benchmark from 2018, when the common-parts concept was introduced.

Wittmann was sitting pretty after the first runs, over 0.3s quicker than the best of the opposition, but his two quick laps at the end of the session on his second set of tyres had no answer to Eng.

Audi pair Robin Frijns and Nico Muller improved on the final lap as the chequered flag was unfurled and they will start from third and fourth respectively, but worrying news for Audi is that the time of Frijns is 0.740s slower than Eng's best. 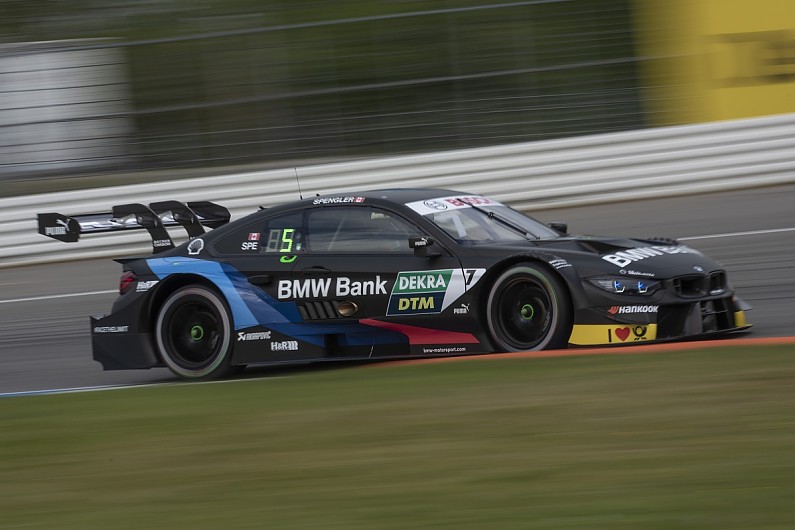 BMW dominates the third row, with Bruno Spengler lining up alongside Timo Glock, and the two-by-two pattern continues on the fourth row thanks to Audi drivers Jamie Green and Loic Duval, and on the fifth rank with BMW pairing Joel Eriksson and Sheldon van der Linde.

Saturday runner-up Mike Rockenfeller was second on the first runs, but returned his Audi to the pits without setting a quick lap on his second set of tyres, dropping to 11th.

It was even worse news for Rene Rast, who launched the front end of his Audi skywards over the kerbs entering the stadium on his first run.

After attention to the car in the pits, Rast returned to the tracks but could not improve, having a lap deleted for track limits and dropping to 16th on the grid.

That puts him in the middle of the R-Motorsport Aston Martins, with Daniel Juncadella the quickest of the Vantage quartet on his way to 14th in the times.