Podium finishers Mike Rockenfeller and Robin Frijns are unsure whether the new wet-weather rubber they had fitted for the race had the same characteristics as other sets from control-tyre supplier Hankook.

Rockenfeller said that, of the top eight on the grid, only Wittmann started the race on the tyres on which he had qualified, and went on to a comfortable win.

"We put the new set on to use the qualifying set later on because we were expecting constant rain, so we were aiming for less loss after the pitstop when we put the tyres on because they were bedded in," said Rockenfeller.

"The tyre never felt good; I never had traction compared to qualifying so I think somehow the tyre set was pretty bad.

"After we put the set from quali on, the car was good again and I think we were competitive.

Frijns added: "I was pretty much struggling from lap four onwards to the end.

"I didn't seem to get the tyres into the window, I was sliding around, I had no traction.

"With six laps to go we boxed and put the tyres from qualifying on and the car felt good straight away."

Further adding to the confusion was the good pace of their Audi stable-mate Rene Rast, who challenged Wittmann for the lead before retiring with gearbox problems.

"We have to analyse a little bit what the pressure was, what pressure Rene for example as a comparison ran because he also had new tyres," said Rockenfeller.

"It's differences in the tyre or pressure because it's the same driver, same car since qualifying." 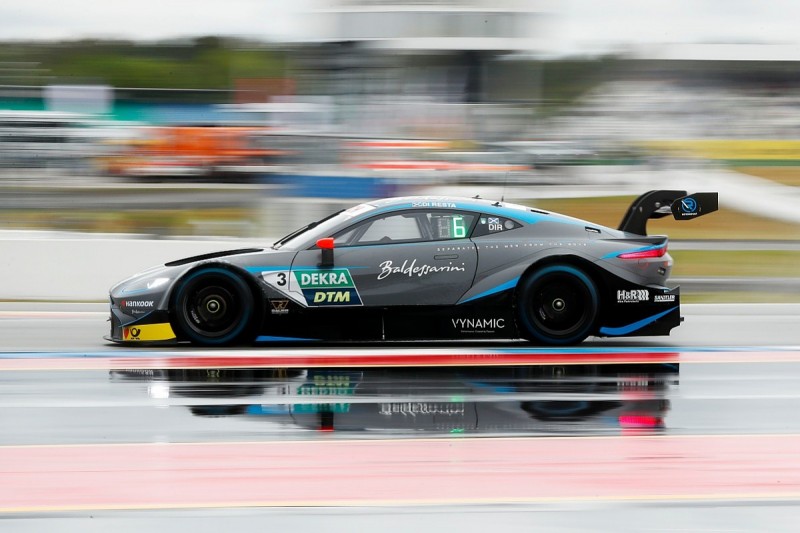 Di Resta ran fifth, but for a period he was four seconds per lap slower than the leading quartet as he led a struggling train of cars.

"The tyre issue is an absolute joke in the wet," di Resta told Autosport.

"In similar track conditions I was six seconds off what I could do in qualifying, and there was literally nothing I could do.

"The fluctuation in tyre performance, for the same pressure, same temperatures, it was like driving on slicks. There was nothing there.

"When I saw the guys at the beginning just pulling away, I couldn't believe it - it sounds like all manufacturers are having the same thing."

Di Resta's R-Motorsport team-mate Daniel Juncadella, who scored points for ninth place, pitted on lap one - even though he had his qualifying set of tyres put on, he experienced the same problems.

"It felt like driving on ice - it was a big surprise," said Juncadella, who was lapped by the leaders before they pitted.

"I saw Marco and Rene coming from behind and I actually thought they had pitted and I was leading and I thought, 'Wow, the strategy worked out!'

"But when I saw the blue flag I was so confused I thought, 'Wow, these guys are so quick.'

"We need to analyse a bit what we did with the tyres."

Responding to the criticism, Hankook European motorsport boss Manfred Sandbichler told Autosport: "We had a track temperature of six degrees Celsius in Hockenheim.

"In these conditions, it is important to get the Hankook wet tyre, which it is not permitted to pre-heat this year, up to the optimal working temperature.

"The drivers managed that, more or less, at the start.

"In an interview, Marco Wittmann, winner of the opening race, said: 'I started the race on the wet tyre we ran in qualifying. That was the key to my success.'"