The Eurotech Racing driver's initial run in the 30-minute session put him in third place, but he improved on his second set of tyres to smash the existing lap record, held by Gordon Shedden from 2016.

"We made a small change to the car and it wasn't as good as it had been in free practice. It was a 50-50 call, and we went the wrong way," said Goff, who is carrying 27kg to reflect his seventh place in the points table.

"So I am stunned with the time we managed to get out of it.

"I am delighted to be under the qualifying lap record too. I just missed out on it last year when I took pole, and now it is finally mine.

"I didn't leave anything on the table in that run, but we know we can improve the car."

Cammish had headed the times initially in his Civic Type R ahead of the Speedworks Toyota Avensis of Tom Ingram.

Cammish went out again and although he improved his lap time, he was still shy of top slot.

"I don't think we can be disappointed with what we did, we were just a fraction away," said Cammish, who is running without any championship ballast.

"The car was good and I thought I had enough of a gap after the opening run, but we can't match Goff." 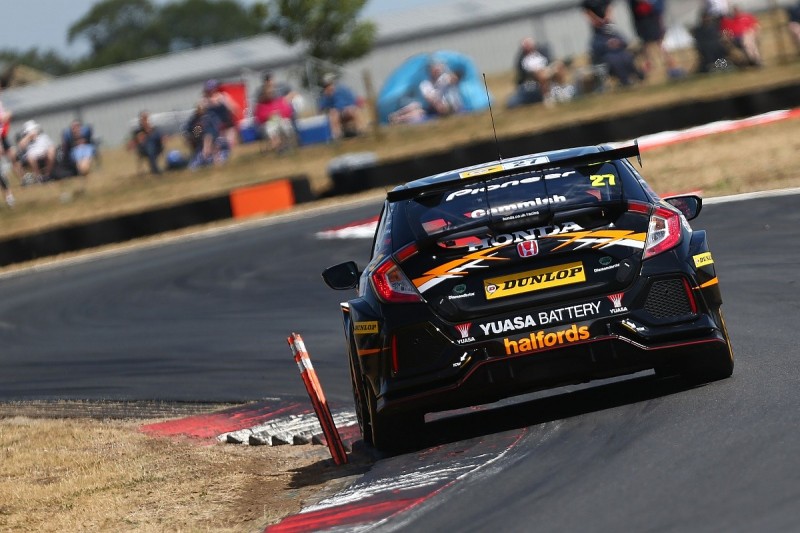 Cammish's team-mate Matt Neal, third in the points going into rounds, hauled his Civic to 12th place with his 57kg of ballast.

Goff's Eurotech team-mate Matt Simpson was another to improve on the second runs and will line up in third place, alongside the sister car of Brett Smith as Hondas annexed the top four spots.

"I thought anywhere in the top 12 would be good with the weight I have got, so to be so close bodes well," he said.

"It is particularly encouraging for the next qualifying session."

Championship leader Colin Turkington, loaded with 75kg of ballast on the WSR BMW 125i M Sport, could only line up in 15th.

All cars will now prepare to take part in a separate 15-minute qualifying session later in the afternoon where they will run without championship success ballast.

The results of that will set the times for the Diamond Double race three on Sunday, which will run to extra length and offer twice the normal amount of points.