Goff, who had been second fastest in practice behind team-mate Brett Smith, dragged his Honda Civic Type R to a fastest time of 1m30.802s to beat the Laser Tools Racing Mercedes A-Class of Aiden Moffat to top spot by 0.357 seconds.

Championship leader Ash Sutton qualified third in his Team BMR Subaru Levorg, while title rival Colin Turkington salvaged 17th after the first half of his session was blighted by a technical problem.

Green-flag running in light rain at the beginning of the session was short-lived, as qualifying was quickly brought to a halt after Smith hit the barrier at Druids.

A five-minute delay ensued but by the time that was over and cars had returned to the track the rain shower had dissipated, and drivers quickly began to lap representatively compared to Saturday's practice sessions.

The Motorbase Ford Focus of Mat Jackson went fastest on a 1m32.943s before a second red flag was shown to allow marshals to recover Josh Cook's MG, which had gone off at Clearways.

With the MG6 recovered, the session ran without stoppage thereafter and it was Goff who stamped his mark on the session.

Although the Eurotech driver was briefly displaced at the top of the timesheet, Goff went two tenths clear with his second flying lap and on his next pulled half a second clear of the pack.

Though he was unable to improve his time on his final run, Goff remained well clear of the pack to clinch his third pole of the season. 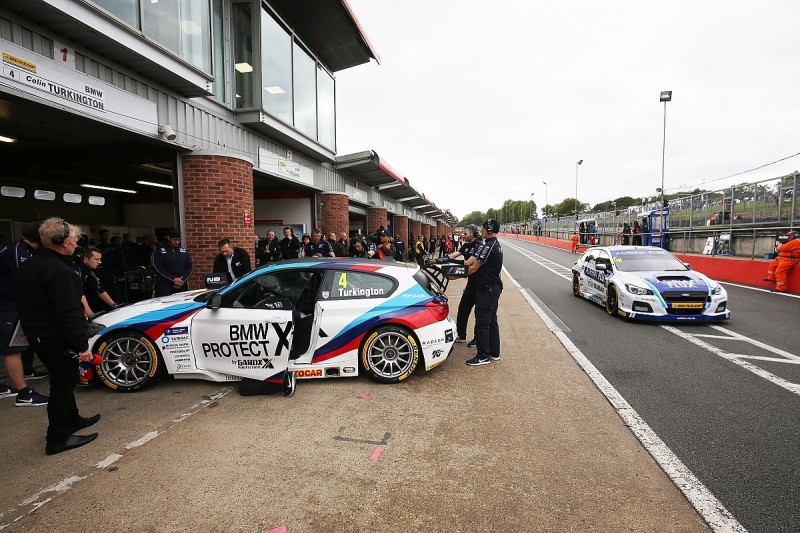 Sutton threatened to steal top spot with his final lap, but ultimately could not improve and instead held on to third - behind Moffat and ahead of the Handy Motorsport Toyota Avensis of Rob Austin.

Tom Chilton qualified fifth in his Vauxhall Astra, ahead of the Team Dynamics Civic of Matt Neal.

The red flag periods proved a blessing for championship hopeful Turkington, who was able to recover from a misfire early on in the session.

Turkington had not set a representative lap by the time the session restarted for a second time and had spent the previous brief green flag period in the pits, but his WSR team was able to return him to the track with 15 minutes of the half-hour session remaining.

The Northern Irishman jumped up to 17th with his first representative effort, and though his position fluctuated thereafter he continued to chip away at his time.

He ended the session 0.796s off the pace, and will share the ninth row of the grid for Sunday's opening race with team-mate Andrew Jordan.

"It was obviously a very difficult session for the team," said Turkington. "I had an issue on my car from the first lap.

"We cured the problem, but it left em with very little opportunity to set a lap time. The positive is we're 17th instead of the back of the grid."

Turkington is 10 points behind Sutton in the points.