Bjork's victory was his first of the WTCR season, winning from pole at the third attempt in his YMR Hyundai i30 N after two previous attempts at Marrakech and in Thursday's opening Nordschleife race.

The Swede held his lead into the opening Turn 1/2 right/left complex at the start of the race, with Vervisch slotting his Comtoyou Racing Audi RS3 LMS in behind from as Bjork's team-mate Yvan Muller brusquely pushed Norbert Michelisz out wide and down to sixth.

Bjork pulled away on the early run on the Grand Prix loop and through the first part of the Nordschleife and, although Vervisch had caught back up by the time they got to the middle sector, was far enough ahead on the long run down Dottinger Hohe towards the end of the lap to start lap two comfortably ahead.

Vervisch dropped back again on that lap, but was able to get much closer to the leader on Dottinger Hohe at the second attempt and crossed the line at the start of the lap just 0.164 seconds shy of Bjork.

That set the Belgian up for an attack around the outside of Turn 1, before he switched back up Bjork's inside for the quick left-handed cutback at Turn 2.

Vervisch was able to draw his Audi alongside the Hyundai but, after the pair had rubbed panels, had to drop back in behind Bjork and did not get close to another attempt for the lead.

Bjork eventually ran out winner by 0.793 seconds, clinching his first victory since the corresponding Nurburgring Nordschleife World Touring Car Championship round a year earlier, ahead of Vervisch and Muller, who was a distant third. 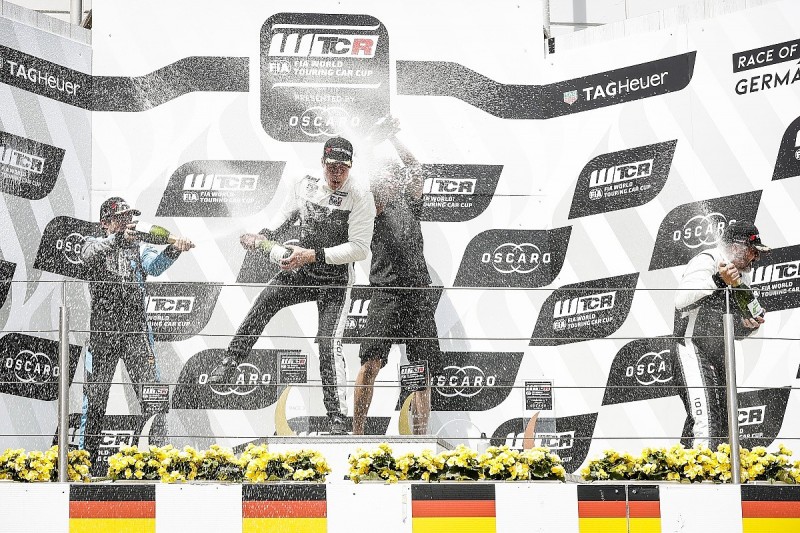 Four-time WTCC champion Muller had been challenged closely by nephew Yann Ehrlacher on the opening two laps, but the young Frenchman parked his Munnich Motorsport Honda Civic early on the final lap.

That promoted Rob Huff to fourth on the Grand Prix loop, but the Sebastien Loeb Racing driver was then passed by Ehrlacher's Munnich Motorpsort team-mate Esteban Guerrieri before the cars headed onto the Nordschleife.

Huff reported his Volkswagen Golf GTi was losing power as he was overtaken by Benjamin Lessennes, and the Briton gradually dropped down the order before his race came to an early end after a hit from Michelisz.

BRC Racing driver Michelisz had dropped from his early sixth place to 11th after a hit from Guerrieri - for which the Argentinian had 10 seconds added to his race time - and tried an overambitious lunge up Huff's inside that speared Huff off left into a barrier and left Michelisz's Hyundai with a broken right-rear wheel.

Nathanael Berthon steered clear of trouble to pick up fifth in the revised classification, ahead of race two runner-up Pepe Oriola (Campos Racing Cupra) and the leading WRT Audi of Jean-Karl Vernay.

Huff's team-mate Mehdi Bennani was classified eighth ahead of Guerrieri, while Tom Coronel's reward for avoiding hitting both Michelisz and Huff after their crash was the final point.

Muller's third place means he assumes the outright lead of the drivers' standings after erstwhile leader Gabriele Tarquini failed to take the start.

Tarquini's third non-score of the weekend was a legacy of the crash he suffered on the Nordschleife in Saturday's earlier second race, which ruled him out of the finale.

Rene Rast was also unable to start race three after his Audi was damaged in an incident with Rob Huff in race two.