Yann Ehrlacher claimed the first win for a Honda in the World Touring Car Cup in the opening race at the Hungaroring, heading Esteban Guerrieri in a Munnich Motorsport 1-2

From fifth on the grid, Ehrlacher hugged the inside off the first corner hairpin and snuck into the lead off Turn 2 when team-mate Guerrieri, defending from polesitter Norbert Michelisz, ran wide and left room up the inside for the sister Civic to squeeze through.

The two Hondas scampered away from there as Michelisz found himself bottled up behind Yvan Muller's Hyundai i30 N, with Ehrlacher resisting final lap pressure from Guerrieri to win.

Guerrieri had grabbed the lead at the start, beating Michelisz on the run to the first corner to take first place.

But the Argentinian ran slightly wide off the corner, allowing Michelisz in his BRC Racing Hyundai to challenge Guerrieri on the run to Turn 2.

After bumping panels with Michelisz approaching the corner, Guerrieri ran slightly deep and forced Michelisz and his team-mate Gabriele Tarquini wide, with Ehrlacher - who had jostled with uncle Muller on the run to Turn 2 - jumping the lot of them to assume the lead.

Guerrieri managed to hold on to second, but the delay allowed Muller to get between the Honda and Michelisz and run third early on.

With Muller's mirrors full of Michelisz's similar car, Ehrlacher and Guerrieri were afforded an opportunity to escape and pulled clear, with Ehrlacher extending a lead of more than a second over Guerrieri who in turn was able to escape more than four seconds up the road from the Hyundai squabble. 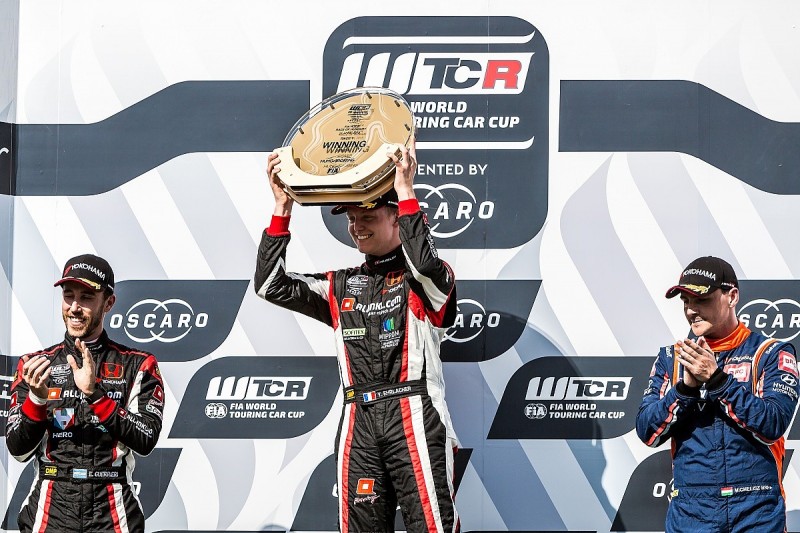 Clear of any danger from behind, Guerrieri closed in on Ehrlacher in the final couple of laps and had caught his team-mate by the time they exited the first corner.

Although Guerrieri pulled out of his team-mate's wake on the approach to Turn 2, that was as close as he got as he backed off in the second half of the lap, leaving Ehrlacher a free run to his second victory at World Touring Car level.

After a couple of botched attempts to pass Muller, Michelisz did finally clear the YMR car on the run to the first corner at the start of the penultimate lap to claim the final podium slot at his home event, finishing some 5.250 seconds behind Guerrieri.

Muller finished fourth ahead of Rob Huff, who managed to get by Tarquini after the lap one scuffle and held off the Italian thereafter.

Wildcard entrant Daniel Nagy was a fine seventh in his Hyundai run by Michelisz's M1RA outfit, while Jean-Karl Vernay claimed eighth after completing a pass on the second YMR car of Thed Bjork around the outside of the first corner on lap four.

Bjork came home ninth, while Mehdi Bennani scored the final point in the amended classification after original 10th place finisher Benjamin Lessennes was handed a 10-second penalty for hitting James Thompson at the first corner four laps from the finish.